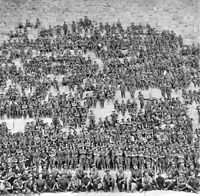 A battalion is a military unit of around 300–1,200 soldiers usually consisting of between two and seven companies and typically commanded by either a Lieutenant Colonel or a Colonel. Several battalions are grouped to form a regiment or a brigade.

The nomenclature varies by nationality and by branch of arms, for instance, some armies organize their infantry into battalions, but call battalion-sized cavalry, reconnaissance, or tank units a squadron or a regiment instead. There may even be subtle distinctions within a nation's branches of arms, such as a distinction between a tank battalion and an armored squadron, depending on how the unit's operational role is perceived to fit into the army's historical organization.

A battalion is generally the smallest military unit capable of independent operations (i.e., not attached to a higher command), although many armies have smaller units that are self-sustaining. The battalion is usually part of a regiment, group or a brigade, depending on the organizational model used by that service. The bulk of a battalion will ordinarily be homogeneous with respect to type (e.g., an infantry battalion or a tank battalion), although there are many exceptions. Every battalion will also include some sort of combat service support, typically organized within a combat support company.

The term is Italian in origin, appearing as battaglione. The French changed the spelling to bataillon, whereupon it directly entered into German.

The term battalion is used in the infantry, Royal Electrical and Mechanical Engineers, (MSSM) and Intelligence Corps only. It was formerly used for a few units in the Royal Engineers (before they switched to regiments), and was also used in the now defunct Royal Army Ordnance Corps and Royal Pioneer Corps. Other corps usually use the term regiment instead.

An infantry battalion is numbered ordinarily within its regiment (e.g., 1st Battalion, The Rifles, usually referred to as 1 Rifles). It normally has a Headquarters Company, Support Company, and three Rifle Companies (usually, but not always, A, B and C Companies). Each company is commanded by a Major, the Officer Commanding (OC), with a Captain or senior Lieutenant as Second-in-Command (2IC). The HQ company contains signals, quartermaster, catering, intelligence, administration, pay, training, operations and medical elements. The support company usually contains anti-tank, machine gun, mortar, pioneer and reconnaissance platoons. Mechanised units usually have an attached Light Aid Detachment (LAD) of the Royal Electrical and Mechanical Engineers (REME) to perform field repairs on vehicles and equipment. A British battalion in World War II had around 845 men in it. With successive rounds of cutbacks after the war, many infantry Regiments were reduced to a single battalion (others were amalgamated to form large Regiments which maintained multiple battalions; e.g., the Royal Anglian Regiment).

Important figures in a battalion headquarters include:

Battalions of other corps are given separate cardinal numbers within their corps (e.g., 101 Battalion REME).

The battalion staff includes the operations officer (usually a major) who is also generally the next in command hierarchy after the battalion 2nd in command.

Those regiments consisting of more than one battalion are:

In the Colombian Army, a battalion usually has a strength of 1,200 to 1,300 men, and is divided in companies. Normally it is commanded by a Lieutenant Colonel or a Colonel. Counter Insurgency Battalions are the exception as they usually have around 300 soldiers, and are commanded by a Major. Two or more battalions form a Brigade.

Battalions are numbered ordinarily and according to its speciality:

With the major reform of its Armed Forces in 2004, the Swiss Army abandoned the old regimental system and adopted a combat team approach centred on battalions as the building blocks of mission-oriented task forces. Battalion sizes vary between branches. For example, an infantry battalion has a nominal strength of 1,224 men.

In the United States Army, a battalion is a unit composed of a headquarters and two or more batteries, companies or troops. They are normally identified by ordinal numbers (1st Battalion, 2nd Squadron, etc.) and normally have subordinate units that are identified by single letters (A Battery, A Company, A Troop, etc.). Battalions are tactical and administrative organizations with a limited capability to plan and conduct independent operations and are normally organic components of brigades, groups, or regiments.

During the American Civil War, an infantry or cavalry battalion was an ad hoc grouping of companies from the parent regiment (which had ten companies, A through K, minus J as described below), except for certain regular infantry regiments, which were formally organized into three battalions of six companies each (numbered 1–6 per battalion vice sequential letter designations). After 1882, cavalry battalions were renamed squadrons and cavalry companies were renamed troops. Artillery battalions typically comprised four or more batteries, although this number fluctuated considerably.

During World War II, most infantry regiments consisted of three battalions (a 1st, 2nd, and 3rd) with each battalion consisting of four companies. That is, companies A, B, C, and D were part of the 1st battalion, companies E, F, G, and H constituted the 2nd battalion, and I, K, L, and M in the 3rd. There was no J company. [The letter J was traditionally not used because in 18th and 19th century old style type the capital letters I and J looked alike and were therefore too easily confused with one another.] It was common for a battalion to become temporarily attached to a different regiment. For example, during the confusion and high casualty rates of both the Normandy landings and the Battle of the Bulge, in order to bolster the strength of a depleted infantry regiment, companies and even battalions were moved around as necessary.

From the 1960s through the early 1980s, a typical maneuver (infantry or tank) battalion had five companies: Headquarters and Headquarters Company (HHC) and A, B, and C Companies, plus a Combat Support Company with a scout platoon, mortar platoon and other elements that varied between organizations. These included heavy anti-tank missile platoons, ground surveillance radar sections, man portable anti-aircraft missile sections and others. Beginning in the early to mid-1980s some elements of the Combat Support Companies (the mortar and scout platoons) were merged into the Headquarters Company with the staff and support elements, others were moved to their parent type organization (ground surveillance radar and air defense), and in infantry battalions the heavy anti-tank missile platoon was organized as a separate company (Echo/E). Simultaneously, there was a fourth "type" company added (Delta/D) in most infantry and tank battalions.

Starting in 2005–2006 with Transformation, U.S. Army mechanized and tank battalions were reorganized into Combined Arms Battalions (CABs). Tank battalions and mechanized infantry battalions no longer exist. These new combined arms battalions are modular units, each consisting of a headquarters company, two mechanized infantry companies, two armor companies, an engineer company, and a forward support company. This new structure eliminated the need to cross-post (or as it is more commonly referred to, cross-attach) companies between battalions; each combined arms battalion was organically composed of the requisite companies. At a higher level, each heavy brigade is composed of two CABs, an armored reconnaissance squadron, a fires battalion (field artillery), a special troops battalion (STB), and a brigade support battalion (BSB).

A United States Marine Corps battalion includes the battalion headquarters, consisting of the commanding officer (usually a lieutenant colonel, sometimes a colonel), an executive officer (the second-in-command, usually a major), the sergeant major, and the executive staff (S-1 through S-8). The battalion headquarters is supported by a Headquarters and Service Company (Battery). A battalion usually contains 2–5 organic companies (batteries in the artillery), with a total of 500 to 1,200 Marines in the battalion. A regiment consists of a regimental headquarters, a headquarters company (or battery), and two to five organic battalions (Marine infantry regiments - three battalions of infantry; Marine artillery regiments - three to five battalions of artillery; Marine combat logistics regiments - two or more combat logistics battalions). In the US Marine Corps, the brigade designation is used only in Marine Expeditionary Brigade (MEB). A MEB is one of the standard Marine Air-Ground Task Forces (MAGTF), is commanded by a brigadier general or major general, and consists of command element, a ground combat element (usually one reinforced Marine infantry regiment), an aviation combat element (a reinforced Marine Air Group), and a service support element (a Marine Logistics group, which includes Naval Construction Force (SEABEEs) and naval medical elements).

In the U.S. Marine Corps, an infantry or rifle battalion typically consists of a Headquarters and Service Company (H&S Co.), three rifle, or line, companies (designated alphabetically A through M depending upon which battalion of the parent regiment to which they are attached) and a weapons company. Weapons companies do not receive a letter designation. Marine infantry regiments use battalion and company designations as described above under World War II, with company letters D, H, and M not normally used but rather held in "reserve" for use in augmenting a fourth rifle company into each battalion as needed.

United States Marine Corps infantry battalions are task organized into Battalion Landing Teams (BLTs) as the Ground Combat Element (GCE) of a Marine Expeditionary Unit (MEU). A "standard" U.S. Marine infantry battalion is typically supported by an artillery battery and a platoon each of tanks, amphibious assault vehicles, light armored reconnaissance vehicles, reconnaissance Marines, and combat engineers. The battalion structure is designed to readily expand to include a fourth rifle company, if required, as described above under battalion organization. Often naval gunfire liaison officers (NGLO) are assigned to the battalion, to coordinate naval gunfire support.

The United States Navy has also had construction battalions since World War II.