The Glasgow, Paisley, Kilmarnock and Ayr Railway (GPK&AR) was a railway in Scotland that provided train services between Glasgow, Kilmarnock and Ayr. For a short period, it also provided West Coast services between Glasgow and London. Opened in stages between 1839 and 1848, the line ran from Paisley in the north to Cumnock and Ayr in the south. The section between Paisley and Glasgow was jointly owned by the Glasgow, Paisley and Greenock Railway. The GPK&AR merged with the Glasgow, Dumfries and Carlisle Railway to form the Glasgow and South Western Railway (G&SWR) in 1850, which was in turn incorporated into the London, Midland and Scottish Railway (LMS) in 1923, and later nationalised to become part of British Railways in 1948.

Since nationalisation the line has suffered numerous cutbacks and closures, mostly due to the Beeching Axe. As a result over half of the stations on the line are now closed. Most of the line and remaining stations are still in use as part of the Ayrshire Coast Line and Glasgow South Western Line.

The idea of a railway connecting Glasgow and Paisley with the towns of Ayrshire had been proposed for years, and in April 1836 a few individuals created a subscription for the creation of the railway.[1] Soon, after several large monetary figures were received, a committee was formed and design work on the line began.[1] The committee consisted of several Glasgow business men and others, who hired Grainger & Miller, civil engineers from Edinburgh, to elaborate the proposal.[2] The proposal was met with general enthusiasm except from the residents of Kilmarnock, who desired a line that passed through the town rather than a branch from elsewhere.[2] With the help of engineers Scott, Stephen & Gale, they countered the Grainger & Miller proposal with their own, which envisioned a line that would head south past Paisley and Johnstone, and then head further south east from Beith towards Kilmarnock before heading to Ayr via Troon and Monkton.[2] Although this line was shorter than the first proposal it had more severe gradients, and when both ideas were submitted to George Stephenson he eventually chose the Grainger & Miller scheme.[2]

Raising capital proved no problem for the committee,[2] and by autumn 1836 the railway proposal had been forwarded to Parliament.[2] As a result, the Glasgow, Paisley, Kilmarnock and Ayr Railway Company was incorporated by an Act of Parliament, given Royal Assent on 15 July 1837,[3] the same day on which the Glasgow, Paisley and Greenock Railway (GP&GR) also received Royal Assent.[3] The two companies agreed to share the line from Glasgow to Paisley,[2] where the GP&GR would branch off to the north west towards Greenock, and the GPK&AR would head south west to Ayrshire. A separate committee was arranged to manage the joint line, chosen from board members of the parent companies.[2] The Act gave the GPK&AR the power to raise a capital in joint stock of £625,000, with an additional £208,300 by loan.[4]

The line, constructed by Grainger & Miller,[2] opened in stages, the first being on 5 August 1839 between Ayr and Irvine.[3] Later it would extend to Kilwinning on 23 March 1840,[5] and to Beith on 21 July 1840.[5] On the same day the joint line and part of the GPK&AR opened between Glasgow and Howwood opened,[6] with the line opening fully between Ayr and Glasgow on 12 August 1840.[5] A temporary terminus station at Howwood (or Howood) which had opened in July closed when the line fully opened.[6] The joint line between Paisley and Glasgow was known as the Glasgow and Paisley Joint Railway, via which trains terminated at Bridge Street in Glasgow. The GPK&AR moved their head offices to Bridge Street from Gordon Street in March 1841.[6]

The line between Dalry and Kilmarnock opened on 4 April 1843,[7][8] and on 28 May 1848 a line opened between Irvine and Crosshouse[9] allowing more direct passenger services from Kilmarnock to Ardrossan (via the Ardrossan Railway). On 16 July 1846 the GPK&AR took over control of the Kilmarnock and Troon Railway,[10] and in 1847 the company bought the Paisley and Renfrew Railway,[11][12] however the sale would not be completed until 31 July 1852.[13]

The last line to open by the original company was a branch to Muirkirk from Auchinleck on 9 August 1848.[14] The railway amalgamated with the Glasgow, Dumfries and Carlisle Railway (GD&CR) on 28 October 1850 to form the Glasgow and South Western Railway (G&SWR).[15]

The first services on the line in 1839, between Irvine and Ayr, travelled at an average of 21 miles per hour (34 km/h) with stoppages averaging 1 min 6 secs per station,[16] meaning a trip along the entire 10.5-mile (16.9 km) line at that point would have taken around 35½ minutes. The maxiumum fare for passengers at the time was 2d, 1½d and 1d for first, second and third class respectively.[16] 137,117 passengers travelled on the line during the first year of services.[16]

In conjunction with the Ardrossan Railway, which was regauged in 1840, on alternate days a fast steamboat service ran between Ardrossan Pier and Liverpool, and vice versa.[17] This connected with the Grand Junction Railway and London and Birmingham Railway's expresses to London.[17] In 1841 the steamboat service was transferred from Liverpool to the new Port at Fleetwood, Lancashire.[17] 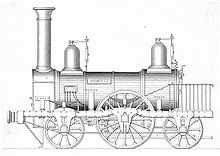 Under the control of the Glasgow and South Western Railway, the former GPK&AR had several of its stations closed, and several new ones opened. Some stations, such as Stewarton (later called Cunninghamhead) were closed and then later reopened. A new station in Ayr was built in 1857 by the Ayr and Dalmellington Railway (who were absorbed by the G&SWR the following year), which became the new terminus for trains in the town, and as a result the original Ayr station was closed to passengers, although it remained open for goods traffic.[22]

Trains continued to run via the Glasgow and Paisley Joint Railway - now jointly managed by the G&SWR and the Caledonian Railway - to Bridge Street station, which remained the Glasgow terminus of both companies until 1883. The City of Glasgow Union Railway opened St Enoch railway station in 1876; in 1883 it became the headquarters of the G&SWR, and a result all G&SWR passenger services were moved to St Enoch railway station. From Shields Junction, G&SWR trains traversed the City of Glasgow Union Railway to reach St Enoch.

In 1892 a new Troon station was built nearer the centre of the town. The original Troon station was closed and its line became a means of bypassing the loop built for the new station.[23] The line was closed on 18 April 1966,[23] with Glasgow trains being forced to use the newer line to reach Ayr, and vice versa.

In 1923, the Glasgow and South Western Railway merged with six other major companies and several other smaller companies to form the London, Midland and Scottish Railway. 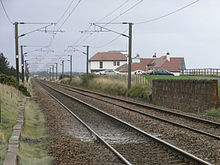 The site of the closed Gailes station in 2007 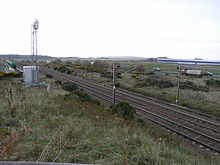 The site of the closed Monkton station in 2007

With nationalisation in 1948, ownership of the former Glasgow, Paisley, Kilmarnock and Ayr Railway fell to British Railways. Two years later the first of several line closures began with the line between Auchinleck and Cronberry closing to passenger traffic on 3 July 1950.[29] However in 1951 services were reinstated for two weeks to accommodate trains travelling from Edinburgh to Ayr.[29] The entire line from Auchinleck to Muirkirk then closed to regular passenger traffic on 1 October 1950,[30] however the line was used up until 1976.[30] Muirkirk station remained open on other lines until 5 October 1964, when it was closed as a result of the Beeching Axe. 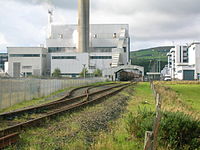 Muirkirk was not the only casualty on this line from the Beeching Axe: the link between Irvine and Crosshouse, which had provided a direct link to Kilmarnock from Ardrossan (via a loop at Byrehill Junction) was closed to local passenger traffic on 6 April 1964,[31] and closed completely 11 October 1965.[32] The loop between Byrehill Junction and Dubbs Junction, which allowed Ardrossan trains to bypass Kilwinning, was also closed on 6 April 1964,[33] however it remained open to passenger traffic until June 1977.[33] During AyrLine electrification, this link was electrified.

The Dalry to Kilmarnock line had provided the G&SWR with a link between Kilmarnock and Glasgow (via the Paisley Canal Line) without having to use lines that were jointly operated with the Caledonian Railway. Again a result of the Beeching Axe, the line was closed to local passenger traffic on 18 April 1966.[34] Despite this, the line remained open for long distance passenger services such as an overnight train from Glasgow to London via Paisley.[35] The line closed to all traffic on 23 October 1973,[34] was singled and later removed. 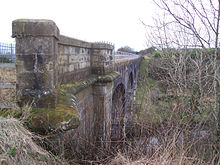 A viaduct on the closed Dalry to Kilmarnock line in 2007

Privatisation resulted in the former GPK&AR being under the ownership of Railtrack, and then from 2002, Network Rail. The line between Paisley and Ayr is now part of the Ayrshire Coast Line (which also incorporates the former Ardrossan Railway), and the remaining line from Kilmarnock to Cumnock is part of the Glasgow South Western Line. Local services are now run by First ScotRail on behalf of Strathclyde Partnership for Transport.

Connections to other lines