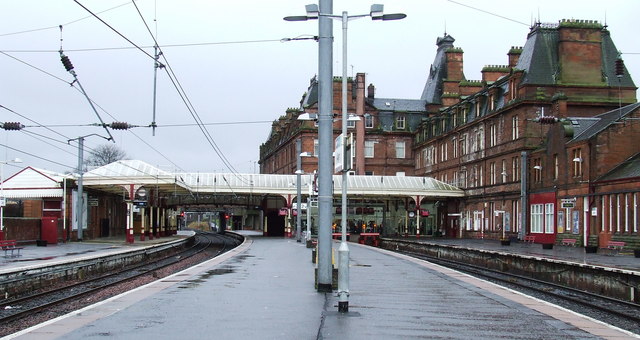 Ayr railway station serves the town of in , . It is situated in Smith Street, off Burns Statue Square. The station, which is managed by , is on the convert|41.5|mi|km south-west of .

The station was opened on by the .

Ayr station consists of two through platforms, and two bay platforms to the north.

The hotel attached to the station was originally opened by the in June 1866; and it become part of the (BTH) at Nationalisation.

The Station Hotel is currently the oldest and most famous hotel in Ayr. The hotel has retained almost all of its original features inside and out.

Ayr used to have a daily service which ran to/from Stranraer via to the , which was dropped in the mid 1980s. In the 1980s the "Royal Scot" started from Ayr. Following completion of the Ayrline electrification the train operated in push-pull mode with Class 87 or 90. In the early 1990s with the restruction of British Railways the train ceased to start from Ayr.

There are trains from Ayr to Glasgow Central every half hour daily, except for Sundays during the winter timetable (Oct-May), when the frequency is hourly. This service is one of the busiest on the rail network in Scotland and can suffer from serious overcrowding at peak times. To alleviate this, in June 2005 First ScotRail extended the length of trains departing Ayr between 0643 and 1813 on weekdays to six cars wherever possible. The expansion of low-cost carrier from is the main reason behind the soaring passenger numbers on the Glasgow - Ayr route.fact|date=April 2008

There are also less frequent services from Ayr to Girvan, Stranraer, Kilmarnock and Newcastle in England.