The Portpatrick and Wigtownshire Joint Railway, often known as the Port Road,[1] was a railway in south-west Scotland, which linked Dumfries, via Castle Douglas, with the port towns of Portpatrick and Stranraer. It also formed part of an England-Scotland railway and sea route to Ireland.

The line, which was single track throughout, closed in 1965 apart from the short section from Stranraer Harbour to Challoch Junction.[2]

The line was a joint railway, being owned by the Caledonian, Glasgow and South Western, London and North Western and Midland railways.[2] It was formed by Act of Parliament on 6 August 1885.[3]

In the 1921 grouping it became part of the London, Midland and Scottish Railway (LMS).

The railway was authorised on 10 August 1857.[3] By 12 March 1861, the line connected Stranraer to Castle Douglas, where it joined the newly constructed Castle Douglas and Dumfries railway.[3] The branch to Portpatrick opened the following year, on 28 August 1862, with the Stranraer Harbour branch, which opened on 1 October 1862; although building work continued on the line for another five years.[3]

Portpatrick's importance as a port declined almost before the Portpatrick branch was completed. Portpatrick Harbour railway station both opened and closed permanently in 1868: opening on 11 September and closing in November.[5] However Portpatrick railway station, which opened on 28 August 1862, remained open until 6 February 1950.[5]

The section from Colfin to Portpatrick also closed in 1950; although Colfin to Stranraer remained open until 1959 for milk traffic.[2] After that trains ran only to the north-western termini: Stranraer Town and Stranraer Harbour. 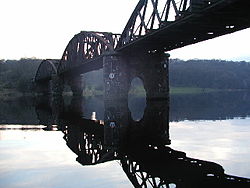 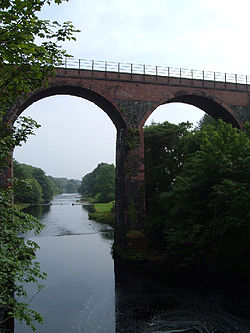 Major structures on the route include the Loch Ken viaduct, across the Dee, the Gatehouse viaduct across the Fleet, and the Glenluce viaduct, over the Water of Luce.

Places and towns served by the Portpatrick Railway

The Wigtownshire Railway was authorised on 18 July 1872.[3] It ran for 19 miles from Newton Stewart to Whithorn.[3] Whilst it was independent, it had its own locomotives.[2]

There was a branch from Millisle to Garlieston station which opened on 3 August 1878.[3] Regular passenger services ceased on this branch on 1 March 1903; Millisle was then renamed as Millisle for Garlieston.[3][5] However, Garlieston had a good harbour from which there were occasional boat excursions to the Isle of Man (as indeed there still are (2008)).[2] These were well patronised, so the railway continued to provide excursion trains to Garlieston until 1935.[2]

Goods services ran from Newton Stewart to Whithorn until the line closed on 5 October 1964. By the 1960s, these services ran three days per week; with conditional working on the Garlieston branch, when required.[6]

The former Wigtownshire Railway closed completely to passengers on 29 September 1950;[3] and the Portpatrick to Stranraer Town section closed in stages in the 1950s.

The whole of the Castle Douglas and Dumfries Railway and majority of the remaining Portpatrick Railway was closed by the Beeching Axe in 1965. Only the Stranraer Harbour to Challoch Junction section is open; and is now served by services on the Glasgow South Western Line.

Connections to other lines