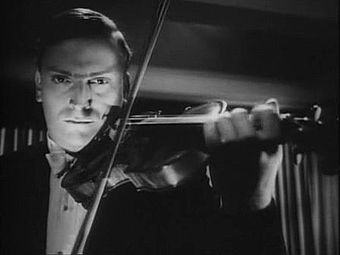 from the film Stage Door Canteen, 1943 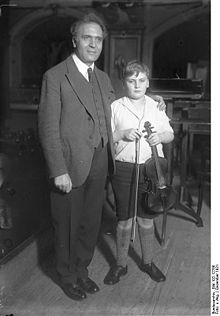 Yehudi Menuhin with Bruno Walter (1931) According to Henry A. Murray, Menuhin wrote: "Actually, I was gazing in my usual state of being half absent in my own world and half in the present. I have usually been able to 'retire' in this way. I was also thinking that my life was tied up with the instrument and would I do it justice?" (Yehudi Menuhin, personal communication, 31 October 1993).

Yehudi Menuhin was born in New York City, New York, to Bielorussian Jewish parents from what is now Belarus. His sisters were the concert pianist and human rights worker Hephzibah Menuhin and the pianist, painter, and poet Yaltah Menuhin. Through his father Moshe Menuhin, a former rabbinical student and anti-Zionist writer, Menuhin was descended from a distinguished rabbinical dynasty.

Menuhin began violin instruction at age four under violinist Sigmund Anker; his parents had wanted Louis Persinger to be his teacher, but Persinger refused.[1] He displayed extraordinary talents at an early age. His first solo violin performance was at the age of seven with the San Francisco Symphony in 1923. Persinger then agreed to take Menuhin as a student. When the Menuhins went to Paris, Persinger suggested Yehudi go to his own teacher, Eugène Ysaÿe. He did have one lesson with Ysaÿe, but did not like his method or the fact that he was very old.[1] Instead, he went to the Romanian composer and violinist George Enescu, after which he made several recordings with his sister Hephzibah. He was also a student of Adolf Busch. In 1929 he played in Berlin, under Bruno Walter's baton, three concerti by Bach, Brahms and Beethoven. In 1932, he recorded Edward Elgar's Violin Concerto in B minor for HMV in London, with the composer himself conducting, and between 1934 and 1936 he made the first integral recording of Johann Sebastian Bach's Sonatas and Partitas for Solo Violin.

Yehudi Menuhin performed for allied soldiers during World War II, and went with the composer Benjamin Britten to perform for inmates of Bergen-Belsen concentration camp, after its liberation in April 1945. He returned to Germany in 1947 to perform with the Berlin Philharmonic Orchestra under the baton of conductor Wilhelm Furtwängler as an act of reconciliation, becoming the first Jewish musician to do so following the Holocaust. He said to critics within the Jewish community that he wanted to rehabilitate Germany's music and spirit. After building early success on richly romantic and tonally opulent performances, he experienced considerable physical and artistic difficulties caused by overwork during the war as well as unfocused and unstructured early training (reportedly he said "I watched myself on film and realized that for 30 years I'd been holding the bow wrong").[citation needed] Careful practice and study combined with meditation and yoga helped him overcome many of these problems. His profound and considered musical interpretations are nearly universally acclaimed. When he finally resumed recording, he was known for practicing by deconstructing music phrases one note at a time.

He and Louis Kentner (his second wife Diana's brother-in-law) gave the first performance of William Walton's Violin Sonata, at Zürich on 30 September 1949.

Menuhin continued to perform to an advanced age, becoming known for profound interpretations of an austere quality, as well as for his explorations of music outside the classical realm.

Menuhin credited the German-Jewish philosopher Constantin Brunner with providing him with "a theoretical framework within which I could fit the events and experiences of life" (Conversations with Menuhin: 32–34).

In 1952, Menuhin met and befriended the influential yogi B. K. S. Iyengar before he had come to prominence outside India. Menuhin arranged for Iyengar to teach abroad in London, Switzerland, Paris and elsewhere. This was the first time that many Westerners had been exposed to yoga.

Following his role as a member of the awards jury at the 1955 Queen Elisabeth Music Competition, Menuhin secured a Rockefeller Foundation grant for the financially-strapped Grand Prize winner at the event, Argentine violinist Alberto Lysy. Menuhin made Lysy his first and only personal student, and the two toured extensively throughout the concert halls of Europe. The young protégé later established the International Menuhin Music Academy in Gstaad, in his honor.[2]

Menuhin made several recordings with the German conductor Wilhelm Furtwängler, who had been criticized for conducting in Germany during the Nazi era. Menuhin defended Furtwängler, noting that the conductor had helped a number of Jewish musicians to flee Nazi Germany.

In 1962, he established the Yehudi Menuhin School in Stoke d'Abernon, Surrey. He also established the music program at the Nueva School in Hillsborough, California sometime around then. In 1965, he received an honorary knighthood. In the same year, Australian composer Malcolm Williamson wrote a violin concerto for Menuhin. He performed the concerto many times and recorded it at its premiere at the Bath Festival in 1965.

Menuhin also had a long association with Ravi Shankar, which began with their 1966 album West Meets East. During this time, he commissioned the composer Alan Hovhaness to write a concerto for violin, sitar, and orchestra to be performed by himself and Shankar. The resulting work entitled Shambala (c.1970), with a fully composed violin part and space for improvisation from the sitarist, is the earliest known work for sitar with western symphony orchestra, predating Shankar’s own sitar concertos; unfortunately, Menuhin and Shankar never recorded it. Menuhin also worked with famous jazz violinist Stéphane Grappelli in the 1970s on Jalousie, an album of pop music of the 1930s arranged in chamber style.

In 1977, at the Edinburgh Festival, he premiered Priaulx Rainier's violin concerto Due Canti e Finale, a work he had commissioned from her. He also commissioned her last work, Wildlife Celebration, which he performed in aid of Gerald Durrell's Wildlife Conservation Trust.

In 1983, he and Robert Masters founded the Yehudi Menuhin International Competition for Young Violinists. Now one of the world's leading competition for young violinists, many of its prize winners have gone on to become some of today’s most exciting violinists. Among them are Tasmin Little, Nikolaj Znaider, Ilya Gringolts, Julia Fischer, Daishin Kashimoto and Lara St. John.

In 1991, he was awarded the prestigious Wolf Prize by the Israeli Government. In the Israeli Knesset he gave an acceptance speech in which he criticised Israel's continued occupation of the West Bank with these words,

"This wasteful governing by fear, by contempt for the basic dignities of life, this steady asphyxiation of a dependent people, should be the very last means to be adopted by those who themselves know too well the awful significance, the unforgettable suffering of such an existence. It is unworthy of my great people, the Jews, who have striven to abide by a code of moral rectitude for some 5,000 years, who can create and achieve a society for themselves such as we see around us but can yet deny the sharing of its great qualities and benefits to those dwelling amongst them."[3]

In 1997, Yehudi Menuhin and Ian Stoutzker founded the charity Live Music Now, the largest outreach music project in the UK. Live Music Now pays and trains professional musicians to work in the community, bringing joy and comfort to those who rarely get an opportunity to hear or see live music performance.

Menuhin's pupils included Nigel Kennedy, Nicola Benedetti, and the violists Paul Coletti and Csaba Erdélyi. Arguably the most famous of Menuhin's violins is the Lord Wilton Guarneri del Gesù, made in 1742.

In the 1980s, Menuhin wrote and oversaw the creation of a "Music Guides" series of books; each covered musical instruments, with one on the human voice. Menuhin wrote some, while others were edited by different authors. 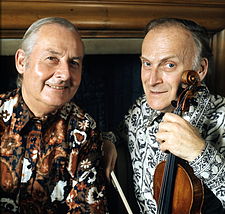 Menuhin regularly returned to the San Francisco Bay Area, sometimes performing with the San Francisco Symphony Orchestra. One of the more memorable later performances was of Elgar's Violin Concerto, which Menuhin had recorded with the composer in 1932.

On 22 April 1978, along with Stéphane Grappelli, Yehudi played Pick Yourself Up, taken from the Menuhin & Grappelli Play Berlin, Kern, Porter and Rodgers & Hart album as the interval act at the 23rd Eurovision Song Contest for TF1. The performance came direct from the studios of TF1 and not that of the venue (Palais des Congrès) from where the contest was held.

He also hosted the PBS telecast of the gala opening concert of the San Francisco Symphony from Davies Symphony Hall in September 1980.

During the 1970s, '80s and '90s, he made jazz recordings with Stéphane Grappelli, classical recordings with L. Subramaniam and albums of Eastern music with the great sitarist Ravi Shankar. In 1983 he founded the Yehudi Menuhin International Competition for Young Violinists in Folkestone, Kent.

His recording contract with EMI lasted almost 70 years and is the longest in the history of the music industry. He made his first recording at age 13 in November 1929, and his last in 1999 at age 82. In total he recorded over 300 works for EMI, both as a violinist and as a conductor. In 2009 EMI released a 51-CD retrospective of Menuhin's recording career, titled Yehudi Menuhin: The Great EMI Recordings.

In 1990, he was the first conductor for the Asian Youth Orchestra which toured around Asia, including Japan, Taiwan, Singapore and Hong Kong with Julian Lloyd Webber and a group of young talented musicians from all over Asia.

Yehudi Menuhin was married twice. He first married Nola Nicholas, daughter of an Australian industrialist, and sister of Hephzibah Menuhin's first husband Lindsay Nicholas. They had two children, Krov and Zamira (the ex-wife of pianist Fou Ts'ong). Following their divorce in 1947, he married the British ballerina and actress Diana Gould, whose mother was the pianist Evelyn Suart (who had played with artists such as Eugène Ysaÿe and Karel Halíř), and whose stepfather was Admiral Sir Cecil Harcourt. Menuhin and Gould had two sons, Gerard and Jeremy, a pianist. Another child died shortly after birth.

The name Yehudi means 'Jew' in Hebrew. In an interview published in October 2004, he recounted to New Internationalist magazine the story of his name:

Obliged to find an apartment of their own, my parents searched the neighbourhood and chose one within walking distance of the park. Showing them out after they had viewed it, the landlady said: "And you'll be glad to know I don't take Jews." Her mistake made clear to her, the antisemitic landlady was renounced, and another apartment found. But her blunder left its mark. Back on the street my mother made a vow. Her unborn baby would have a label proclaiming his race to the world. He would be called "The Jew."[4]

A picture of Menuhin as a child is sometimes used as part of a Thematic Apperception Test.[5]

Soon after his death, the Royal Academy of Music acquired the Yehudi Menuhin Archive, one of the most comprehensive collections ever assembled by an individual musician.

The catchphrase "Who's Yehoodi?" popular in the 1930s and 1940s was inspired by Menuhin's guest appearance on a radio show, where Jerry Colonna turned "Yehoodi" into a widely recognized slang term for a mysteriously absent person. It eventually lost all of its original connection with Menuhin.

Yehudi Menuhin was also 'meant' to appear on The Morecambe and Wise Show but could not do so as he was 'opening at the Argyl Theatre, Birkenhead in Old King Cole'. He was instead replaced by Eric Morecambe in a famous sketch featuring the conductor André Previn.

Yehudi Menuhin was referenced in an episode of the US television series Sports Night. The episode, "Celebrities", featured an after hours game of Celebrities among the Sports Night staff. Dan Rydell, one of the fictional show’s co-anchors, gave clues to his teammates in a game of Celebrities, trying to get them to guess the name Yehudi Menuhin. He had shown his co-anchor, Casey McCall, a secret hand gesture that would clue him in to say “Yehudi Menuhin”, but during the game, Casey forgot the secret signal, and could not recall Menuhin's name.

Menuhin was also mentioned a number of times in Pat Conroy's novel The Prince of Tides.

The song "Amateur Hour" by Sparks refers to Menuhin.