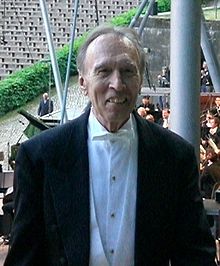 Born in Milan, Italy, Abbado is the son of the violinist and composer Michelangelo Abbado, who was his first piano teacher, and the brother of musician Marcello Abbado. After studies at the Milan Conservatory, in 1955 Claudio Abbado studied conducting with Hans Swarowsky at the Vienna Academy of Music. In 1958 he won the international Koussevitsky Competition for conductors, which resulted in a number of operatic conducting engagements in Italy, and in 1963 he won the Dimitri Mitropoulos Prize for conductors, allowing him to work for five months with the New York Philharmonic.

Abbado recalls desiring to become a conductor for the first time as a child, when he heard a performance of Claude Debussy's Nocturnes. He had the opportunity to attend many orchestral rehearsals in Milan led by such conductors as Arturo Toscanini and Wilhelm Furtwängler and has told interviewers that Toscanini's tyrannical and sometimes abusive manner towards musicians in rehearsal repelled him, and that he resolved to behave in the gentler manner of Bruno Walter. Abbado is known to exhibit a friendly, understated, and non-confrontational manner in rehearsal.

He made his début at La Scala in his hometown of Milan in 1960 and served as its music director from 1968 to 1986, conducting not only the traditional Italian repertoire but also presenting a contemporary opera each year, as well as a concert series devoted to the works of Alban Berg and Modest Mussorgsky. Abbado also founded the Filarmonica della Scala in 1982, for the performance of orchestral repertoire in concert.

Abbado conducted the Vienna Philharmonic for the first time in 1965 in a concert at the Salzburg Festival. He served as music director for the Vienna State Opera from 1986 to 1991, with notable productions such as Mussorgsky's original Boris Godunov and his seldom-heard Khovanshchina, Franz Schubert's Fierrabras, and Gioacchino Rossini's Il viaggio a Reims.

In 1989, the Berlin Philharmonic Orchestra elected him as their chief conductor, to succeed Herbert von Karajan, a post he held until 2002.[2] In 2004 he returned to conduct the Berlin Philharmonic and performed Mahler's Symphony No. 6 in a series of recorded live concerts. The resulting CD won Best Orchestral Recording and Record of the Year in Gramophone Magazine's 2006 awards.[3]

The Orchestra Academy of the Berlin Philharmonic established the Claudio Abbado Composition Prize in 2006 in his honour.[4]

In 1988, he founded the music festival Wien Modern, which has since expanded to include all aspects of contemporary art. This interdisciplinary festival takes place each year under his direction.

Abbado is also well-known for his work with young musicians. He is founder and music director of the European Union Youth Orchestra (1978) and the Gustav Mahler Jugendorchester (1986). He is also a frequent guest conductor with the Chamber Orchestra of Europe with whom he recorded a cycle of Franz Schubert symphonies to considerable acclaim. More recently, he has worked with the Orquesta Sinfónica Simón Bolívar of Venezuela.[5]

He was diagnosed with stomach cancer in 2000 and the treatment led to the removal of a portion of his digestive system. After recovery he formed the Lucerne Festival Orchestra in 2003[6] and their concerts have been highly acclaimed.[7] Abbado is scheduled to remain as the orchestra's music director and chief conductor through 2010.[8] He also serves as music director of the Mozart Orchestra of Bologna, Italy.

In September 2007 he announced that he was cancelling all of his forthcoming conducting engagements for the "near future" on the advice of his physicians[9] but two months later he resumed conducting concerts with an engagement in Bologna.[10] In July 2011, aged 78, he declared himself to be in good health.[11]

Abbado's son is the opera director Daniele Abbado. From his relationship with the violinist Viktoria Mullova, he is the father of her oldest child, Misha.[12] His nephew, Roberto Abbado, (the son of his brother Marcello, born 1926, who is a composer and pianist) is also a conductor.

Claudio Abbado has received many awards and recognitions among which the Grand cross of the Légion d'honneur, Bundesverdienstkreuz, Imperial Prize of Japan, Mahler Medal, Khytera Prize, and honorary doctorates from the universities of Ferrara, Cambridge, Aberdeen, and Havana.

In 1973, he won the Mozart Medal awarded by Mozartgemeinde Wien,[13] and the Ernst von Siemens Music Prize in 1994.