Deutsche Grammophon is a German classical record label which was the foundation of the future corporation to be known as PolyGram. It is now part of Universal Music Group (UMG) since its acquisition and absorption of PolyGram in 1999, and it is also UMG's oldest active label. It is also the oldest surviving established record company.[1] 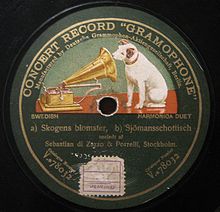 Deutsche Grammophon Gesellschaft was founded in 1898 by German-born United States citizen Emile Berliner as the German branch of his Berliner Gramophone Company. Based in the city of Hannover (the founder's birthplace), the company had links with the U.S. Victor Talking Machine Company and the British Gramophone Company, but those links were severed at the onset of World War I.

In 1941 Deutsche Grammophon was purchased by the Siemens & Halske electronics company.

In 1949, Deutsche Grammophon sold the German rights of the His Master's Voice trademark to the Electrola Records unit of EMI.[2] The dog and gramophone were replaced by the crown of tulips, designed by Siemens advertising consultant Hans Domizlaff.

In 1962 Siemens formed a joint venture with Netherlands-based Philips to create the DGG/PPI Record Group, which became PolyGram Records in 1972. By this time, DGG had built a solid reputation for high-quality recording in the classical field as well as a very notable roster of contracted singers, musicians, and conductors. Through its subsidiary label Archiv Produktion it also stimulated interest in Western medieval and renaissance music, 15th–16th century choral polyphony, Gregorian chant, and pioneering use of historical instruments and performance practices in recordings.

Deutsche Grammophon pioneered the introduction of the compact disc to the mass market, debuting classical music performed by Herbert von Karajan and the Berlin Philharmonic for sale in the new medium in 1983, the first recording being Richard Strauss' Eine Alpensinfonie.

DGG/Polydor's entrance into the US market in 1969 (DGG had distribution deals in the US with Decca Records and MGM Records beforehand) came at a time when the big US classical labels—Columbia (Masterworks) and RCA (Red Seal and Victor) were dropping their unlucrative classical artists and making poor-quality pressings. The fine quality both of recording and of pressings helped DGG especially succeed and attract Arthur Fiedler and the Boston Pops Orchestra to DGG/Polydor. In 1987 Siemens sold off its interest in PolyGram, and Philips became the majority shareholder. In 1998, the Seagram Company Ltd. of Canada purchased Deutsche Grammophon and PolyGram. Since then, Deutsche Grammophon was merged into Universal Music Group, a division of Vivendi.

Deutsche Grammophon has a huge back catalogue of notable recordings. The company is reissuing a portion of it in its Originals series; compact disc releases are noted for their vinyl record stylized design. It is also releasing some of American Decca Records' albums from the 1940s and 1950s, such as those that Leonard Bernstein made for Decca in 1953, and the classic Christmas album that features Ronald Colman's starring in A Christmas Carol and Charles Laughton's narrating Mr. Pickwick's Christmas. Along with the American Decca Records classical music catalogue, Deutsche Grammophon also manages the classical music catalogue of ABC Records, including Westminster Records which, along with American Decca, were part of MCA Records.

Although Deutsche Grammophon acquired the reputation of releasing mainstream classical recordings, from the 1960s onwards it released several avant-garde recordings (initially under the Avant-Garde imprint), including Bruno Maderna, David Bedford, Cornelius Cardew, Luigi Nono and improvisations. It also released the majority of the compositions of Karlheinz Stockhausen until the composer bought the rights to the recordings and re-released them on his own label. Other German composers associated with the label included Paul Hindemith and Hans Werner Henze.