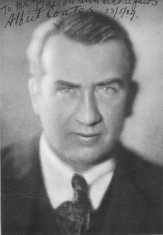 Coates was born in , , the youngest of seven sons of an English father and a Russian mother.

He studied at the conservatory in , where his greatest teacher was . He worked for a time at , and became conductor at Saint Petersburg's . He escaped with considerable difficulty from Russia in April 1919.

He made his debut at the , in 1914 with 's "". Dynamic in his approach and especially successful in Russian music, he introduced many new works to audiences, including pieces by , and , and, perhaps most notably, led the first complete London public performance of "" by .

In the 1920s and early 1930s he frequently worked with the . He made important early contributions to the representation of orchestral music on the , beginning in 1920 with Scriabin's "Poème de l'Extase" and afterwards conducting many excerpts from Wagner's "" and (in 1925) the complete "Symphony No. 9" of Beethoven. He was the conductor for the 1930 premiere recording of 's "Piano Concerto No. 3 in D minor", with as soloist.

In 1925 he gave the first stage performance outside Russia of 's opera "The Invisible City of Kitezh".

His compositions include the s "Samuel Pepys" and "Pickwick", a piano concerto and a symphonic poem "The Eagle", dedicated to the memory of his former teacher , which was performed in Leeds in 1925. In 1946 he settled in , , where he died in 1953.

Albert Coates was no relation to , the English light music composer, or to the tenor singer John Coates.