Northern Illinois University (NIU) is a state university and research institution located in DeKalb, Illinois, with satellite centers in Hoffman Estates, Naperville, Rockford, and Oregon. It was originally founded as Northern Illinois State Normal School on May 22, 1895 by Illinois Governor John P. Altgeld as part of an expansion of the state's system for training college educated teachers. John G. Peters has been president since 2000.

The university is composed of seven degree-granting colleges and has a student body of 25,000 with over 225,000 alumni. Many of NIU's programs are nationally accredited for meeting high standards of academic quality, including business, engineering, nursing, visual and performing arts, and all teacher certification programs. It is one of only two public universities in Illinois that compete in the National Collegiate Athletic Association at the highest levels of all sports, Division 1. NIU's athletic teams are known as the Huskies and compete in the Mid-American Conference. 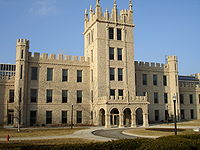 Altgeld Hall, the first building to be constructed at NIU.

Northern Illinois University was founded as part of the expansion of the normal school program established in 1857 in Normal, Illinois. In 1895, the state legislature created a Board of Trustees for the governance of the Northern Illinois State Normal School, which would eventually grow into the what is today known as NIU.

A shooting took place on campus at Cole Hall on February 14, 2008. Six people died in the shooting, including the perpetrator, making it the fourth-deadliest university shooting in United States history.

NIU has seven degree-granting colleges[3] that together offer more than 60 undergraduate majors, 70 minors, nine pre-professional programs, and 79 graduate programs, including a College of Law,[4] and over 20 areas of study leading to doctoral degrees.[5] Many of NIU's academic programs are nationally accredited for meeting the highest standards of academic quality and rigor, including business, engineering, nursing, visual and performing arts, and all teacher certification programs.[6]

NIU is ranked as a National University by the U.S. News & World Report, where it typically places in the fourth quartile.[10][11][12][13][14] However, in the most recent 2012 edition, NIU was ranked (194) making the third quartile rank. The same publication also ranks NIU as 41st best in the country for Public Affairs programs[15], and within that field, NIU's program in City Management & Urban Policy is ranked #3 in the nation and the Public Finance & Budgeting program at #13[16].[17]

Washington Monthly ranks NIU as one of the top 150 research universities in the United States. Forbes magazine, which does not separate small liberal arts colleges from large universities in its rankings, places NIU as #610 of 650 colleges and universities on its list, the lowest ranking assigned by Forbes to any public college in Illinois.[18]

The Carnegie Foundation for the Advancement of Teaching recognizes Northern Illinois University as high-level research institution of higher education, based on breadth of research and academic programs. Carnegie categorizes Northern as: "RU/H: Research Universities (high research activity)."[20] The Northern Illinois University Department of Chemistry and Biochemistry was listed in the American Chemical Society's trade journal Chemical & Engineering News on September 26, 2005 as one of the top 25 producers of ACS-certified Bachelor of Science degrees in chemistry in the United States.

Currently, the Ph.D. is offered by 10 academic departments and the Ed.D. in six academic majors.

First-Year Connections hosts UNIV 101 (University Experience) and UNIV 201 (The Transfer Experience), which provide an invaluable introduction to college. These elective 1-credit, 12-­week courses are designed to help new students adjust to NIU and develop the skills necessary to succeed in college and beyond. During the fall 2009, more than 62 percent of the freshman class enrolled in a UNIV 101 course. These courses have an average class size of 20 students and are designed to foster close interaction.[22]

A new Academic Advising Center works with “undecided” students from the time they arrive on campus during orientation until they’ve selected a major . The student-centered staff advises students as they develop specialized academic plans compatible with student educational and life goals.

Among the many services of the office of Student Involvement & Leadership Development are opportunities for local and far-reaching volunteerism, including NIU Cares Day, Rake Across DeKalb and alternative spring break programs.

The Counseling & Student Development Center supports the academic, emotional, social and cultural development of students through counseling, assessment, crisis response, outreach, consultation, training and educational services. Counselors help students to address personal challenges and acquire the attitudes, abilities and knowledge that will enable them to take full advantage of their college experience.

Northern View Community, which opened in 2008, offers an apartment living experience to undergraduate students who are at least two years post high school, graduate students, law students or any student who has a dependent and/or a partner or spouse.[25]

The university’s DeKalb campus is in the process of a residential renaissance to ensure future students are able to obtain the best living and learning environment possible – from state-of-the-art new, technologically sophisticated residence halls built around a neighborhood theme with full amenities, to comfortable, functional public spaces. A brand new, 1,000-bed residence hall complex will open to all students in the fall of 2012. This new community will feature two residential buildings where students can live in small group clusters of 12.[26] Additionally, Gilbert Hall, which has not been used as a residence hall since 1995, will undergo complete remodeling and renovation and reopen to students in the fall of 2013. As well, after an extensive renovation, Grant C Tower will reopened in fall 2011 with completely new accommodations and furnishings for NIU students. A second renovated tower of Grant will reopen in fall 2013.

The Huskie Bus Line, the largest student-run university bus system in Illinois, operates seven days a week while school is in session during the fall and spring semesters.[27] 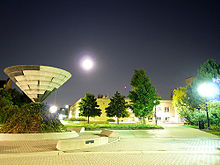 NIU’s Campus Child Care Center offers high quality care to children ages 2 months to 5 years, along with a summer school program for children ages 6 to 8. Enrollment is secured on a first-come, first-served basis, with priority given first to currently enrolled families, followed by NIU students; NIU faculty and staff and the community. The center is licensed through the State of Illinois and accredited through the Academy of Early Childhood Program Accreditation.

The Campus Life Building is home to the Campus Activities Board, Career Services, the Counseling and Student Development Center, the Honors Program, the Northern Star student newspaper, the Student Association and Student Involvement and Leadership Development.

The Holmes Student Center provides places to study, computer labs, restaurants, the University Bookstore, a branch of TCF Bank are more. It also is home to the Huskies Den, which features bowling, billiards, a video arcade and Xbox and Xbox 360 gaming.

NIU is home to more than 400 student organizations, including a host of recreational sports clubs including lacrosse, volleyball, rugby, swimming, and hockey. Groups embrace interests from academics, advocacy, athletics and the arts to community service, ethnicity, politics and religion.[28]

Students and faculty in NIU’s College of Visual and Performing Arts host dozens of art exhibitions, musical concerts and theatrical and dance productions throughout the year. Many are free.

NIU’s School of Music also is home to the internationally renowned NIU Jazz Ensemble and NIU Steelband as well the Avalon String Quartet, described by the Chicago Tribune as “an ensemble that invites you – ears, mind and spirit – into its music.”

The NIU Art Museum, which has several galleries in Altgeld Hall, hosts several shows of professional works. The campus also houses an anthropology museum (scheduled to reopen in the fall of 2011), the Blackwell History of Education Museum, the Burma Art Collection and the theater-based Historic Scenic Collection.

The Department of Communication sponsors the annual Reality Bytes Film Festival, created in 2002 by media studies professor Laura Vazquez to give NIU students the ability to competitively screen their work. The 2011 festival received more than 40 entries from across the country and as far away as Cuba, South Africa and Australia.[29] 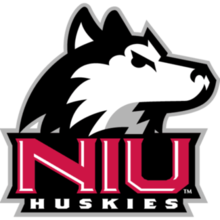 NIU was a member of the Illinois Intercollegiate Athletic Conference from 1920-1967. Currently, the NIU Huskies compete in the Mid-American Conference.

NIU's athletic department experienced large growth in reputation in the late 1990s and early 2000s. Almost completely unknown to observers from outside of Illinois before the mid-1990s, the Huskies were ranked as high as 10th in the 2003 AP College Football poll after victories against BCS opponents #14 Maryland (who finished that season at #17), #21 Alabama and Iowa State. In 2010, NIU football had its first undefeated MAC regular season (8-0), and cracked the top 25 in Associated Press and Coaches Polls.

On the west side of campus is Brigham Field at Huskie Stadium, the home of NIU football games, which also often hosts other significant outdoor events. Huskie Stadium, which has a seating capacity over 30,000, is surrounded by large open grassy areas which provide recreation, and also serve as the tailgating lots for football games. There is also a baseball field, Ralph McKinzie Field, a softball field, Mary M. Bell Field, a soccer field, Huskie Soccer Complex, and tennis courts, Gullikson Tennis Courts, which flank Huskie Stadium. At the Stadium's north end zone is the $14-million Jeffrey and Kimberly Yordon Academic and Athletic Performance Center whose namesakes donated $2.5 million in the fall of 2006 to help with the construction. The facility opened in August 2007.

On the far west side of campus is the Convocation Center, a state-of-the-art 10,000 seat arena which hosts NIU Men's and Women's Basketball, Gymnastics, Wrestling, and Volleyball, Victor E. Court, games, the opening Convocation Ceremony for incoming freshmen, music concerts, and a variety of events throughout the year including Job Fairs, Internship Fairs, and other expositions.

The residence halls, located in the same area as the above athletic facilities, are also flanked by numerous sand volleyball areas, a large quad between the dorms, basketball courts, skating courts, Eco Lake, and open fields for recreation.

At the corner of Annie Glidden Road and Lucinda Avenue is the Chick Evans Field House, a building which consists of a series of gymnasiums, which has since been under-used since the basketball team moved to the Convocation Center. The fieldhouse continues to host expositions and sporting events of a smaller scale, and is the headquarters for the campus ROTC program.