University of Saint Mary of the Lake

University of Saint Mary of the Lake 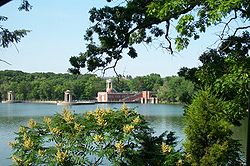 Photo of University of Saint Mary of the Lake Boat House from across the lake. Taken by Ken Torbeck.

University of Saint Mary of the Lake, also called Mundelein Seminary, is the principal seminary and school of theology for the formation of priests in the Roman Catholic Archdiocese of Chicago, governed from Chicago, Illinois in the United States. It is recognized as the first institution of higher education in the City of Chicago. Chartered by the Illinois General Assembly in 1844, it has the longest continuous academic charter in the state of Illinois. The Reverend Monsignor Dennis J. Lyle is the rector and president of the seminary and university. Cardinal Francis George, O.M.I., is the chancellor in his capacity as Archbishop of the Archdiocese of Chicago.

The largest major seminary in the United States,[1] Mundelein Seminary serves 45 dioceses in eight different countries and was the first ecclesiastical faculty in the U.S.

Chicago Studies is an academic journal for priests and others in parish ministry. It is edited by the university/seminary faculty along with priests of the Archdiocese of Chicago.

Located north of Route 176 and east of Rt. 45 in the northeastern corner of the Village of Mundelein, the seminary occupies more than 600 acres (242.8 ha). The eastern portion of St. Mary's Lake extends into Libertyville, Illinois

The campus has capacity for about 400 students. It is distinctive for its neo-Georgian architecture, laid out symmetrically and centered upon the chapel, dedicated to the Blessed Virgin Mary under the title of her Immaculate Conception — the patroness of the seminary.

Other important buildings on the extensive campus - unique among Catholic seminaries - are separate seminarian and faculty residences, a classroom building, the refectory, the Feehan Memorial Library/McEssy Theological Resource Center, the administration building, a convent, gymnasium, conference and guest facilities, the Cardinal Stritch Retreat House, and a Villa for the Archbishop of Chicago.

The campus is home to the historic Howell-Wurlitzer theatre organ, acquired by Cardinal Mundelein in 1934 and installed in the seminary auditorium.

Bishop William J. Quarter, the first bishop of Chicago, oversaw the creation and early development of the University of Saint Mary of the Lake with the primary objective of ordaining priests to serve the growing diocese. After years in flourishing operation but growing financial burden, the university was forced to close in 1866.

Expressing a need for more priests, Archbishop George Mundelein was compelled to re-open the institution as Saint Mary of the Lake Seminary around 1921. In 1926, the seminary opened a new campus church, designed by Chicago architect Joseph W. McCarthy.[2] The institution became known throughout the world in 1926 as a site for the International Eucharistic Congress.

In September 1929, the seminary received a second charter, this time from the Holy See. Cardinal Mundelein obtained from the Sacred Congregation for Seminaries and Universities the authority to grant the international academic degrees of the Holy See. In 1934 the Ecclesiastical Faculty of Theology at Mundelein was honored with a permanent grant of this authority. The seminary became the first American institution to be honored as a pontifical theological faculty under the Apostolic Constitution Deus Scientarium Dominus. The seminal liturgical leader and Catholic Action chaplain Msgr. Reynold Henry Hillenbrand served as rector of St. Mary of the Lake Seminary from 1936-1944.

Under the leadership of Cardinal Albert Meyer, in 1961 the seminary opened a second campus in Niles, Illinois. The Niles campus became the site for the two-year liberal arts program. The Mundelein campus included the upper class college studies in philosophy followed by a four year theology curriculum. Under Cardinal Meyer’s successor, Cardinal John Cody, the undergraduate program was affiliated with Loyola University of Chicago and became Niles College of Loyola University. Saint Mary of the Lake Seminary was now strictly a graduate school of theology. The program which resulted from that revision continued to be implemented for more than a decade, its academic, formation/spiritual and pastoral aspects guided by the Program of Priestly Formation of the National Conference of Catholic Bishops and the directives of the Sacred Congregation for Catholic Institutions.

In 1971, Saint Mary of the Lake Seminary became affiliated with the Association of Theological Schools of the United States and Canada, which is the accrediting body for theological seminaries and divinity schools.

1976 saw two milestones in the seminary history. In cooperation with the Center for Pastoral Ministry, the Archdiocese of Chicago’s continuing education school, the seminary began a program of studies leading to the new doctor of ministry degree. Also in 1976, the seminary celebrated the 50th anniversary of the first ordinations held in the Chapel of the Immaculate Conception.

In Fall of 1982, under the direction of Archbishop Joseph Bernardin, the seminary faculty initiated a thorough revision of the program which had been in place for ten years. The changes had as their goal the better implementation of the objectives set forth in the third edition of the Program of Priestly Formation.

During the spring of 1996, Mundelein Seminary was visited by members of the Bishops’ Committee on Seminaries. After an extensive series of meetings with faculty and students, the members of the committee gave a strong recommendation to the seminary program.

Cardinal Francis George continued this development of the university in February 2000 by transferring the Archdiocese of Chicago’s programs of ministry formation to the seminary. Three former agencies of the Pastoral Center were transferred here to become programs of Mundelein Seminary. Joining USML that year were the Lay Ministry Formation Program, the Diaconate Formation Program and the Instituto de Liderazgo Pastoral. While remaining separate and distinct from the priestly formation program, all are to cooperate under the seminary aegis in advancing the efforts of ministry preparation and formation for all those involved in pastoral ministry. Plans were also begun to separate the continuing education programs of the Center for Development in Ministry from the university and to relocate them as an agency of the Pastoral Center. These same plans included the continued operation of a Conference Center at the University of Saint Mary of the Lake. This would make Mundelein Seminary the center for all basic formation for ministry, while leaving continuing formation to other agencies. To reflect this evolution, the Board of Advisors decided to adopt a compound name, the University of Saint Mary of the Lake / Mundelein Seminary. This follows the style of most of the pontifical universities which have a formal name and a common name which become interchangeable.

The Mundelein Psalter, the first complete one-volume edition containing the approved English-language texts of the Liturgy of the Hours with psalms that are pointed for the chanting of the Divine Office, was published in 2007.

In addition to the Archdiocese of Chicago, the seminary is used by the following dioceses: