Leh
This article is about the municipality in India. For its namesake district, see Leh district.
For other uses, see LEH (disambiguation).

Leh (Tibetan alphabet: གླེ་, Wylie: Gle; Hindi: लेह), was the capital of the Himalayan kingdom of Ladakh, now the Leh District in the state of Jammu and Kashmir, India. Leh, with an area of 45,110 km2, is the second largest district in the country (after Kutch, Gujarat) in terms of area.[citation needed]

The town is still dominated by the now ruined Leh Palace, former mansion of the royal family of Ladakh, built in the same style and about the same time as the Potala Palace. Leh is at an altitude of 3524 metres (11,562 ft) , and connects via National Highway 1D connects it to Srinagar in the southwest and to Manali in the south via Leh-Manali Highway

Leh was an important stopover on trade routes along the Indus Valley between Tibet to the east, Kashmir to the west and also between India and China for centuries. The main goods carried were salt, grain, pashm or cashmere wool, charas or cannabis resin from the Tarim Basin, indigo, silk yarn and Banaras brocade.

Although there are a few indications that the Chinese knew of a trade route through Ladakh to India as early as the Kushan period (1st to 3rd centuries AD),[1] and certainly by Tang dynasty,[2] little is actually known of the history of the region before the formation of the kingdom towards the end of the 10th century by the Tibetan prince, Skyid lde nyima gon (or Nyima gon), a grandson of the anti-Buddhist Tibetan king, Langdarma (r. c. 838 to 841). He conquered Western Tibet although his army originally numbered only 300 men. Several towns and castles are said to have been founded by Nyima gon and he apparently ordered the construction of the main sculptures at Shey. "In an inscription he says he had them made for the religious benefit of the Tsanpo (the dynastical name of his father and ancestors), and of all the people of Ngaris (Western Tibet). This shows that already in this generation Langdarma's opposition to Buddhism had disappeared."[3] Shey, just 15 km east of modern Leh, was the ancient seat of the Ladakhi kings.

During the reign of Delegs Namgyal (1660–1685),[4] the Nawab of Kashmir, which was then a province in the Mogul Empire, arranged for the Mongol army to (temporarily) leave Ladakh (though it returned later). As payment for assisting Delegs Namgyal, the Nawab made a number of onerous demands. One of the least was to build a large Sunni Muslim mosque in Leh at the upper end of the bazaar in Leh, below the Leh Palace. The mosque reflects a mixture of Islamic and Tibetan architecture and can accommodate more than 500 people.[citation needed] This was apparently not the first mosque in Leh; there are two smaller ones which are said to be older.[5]

Several trade routes have traditionally converged on Leh, from all four directions. The most direct route was the one the modern highway follows from the Punjab via Mandi, the Kulu valley, over the Rohtang Pass, through Lahaul and on to the Indus Valley, and then down river to Leh. The route from Srinigar was roughly the same as the road that today crosses the Zoji La (pass) to Kargil, and then up the Indus Valley to Leh. From Baltistan there were two difficult routes: the main on ran up the Shyok Valley from the Indus, over a pass and then down the Hanu River to the Indus again below Khalsi (Khalatse). The other ran from Skardu straight up the Indus to Kargil and on to Leh. Then, there were both the summer and winter routes from Leh to Yarkand across the Karakorum. Finally, there were a couple of possible routes from Leh to Lhasa.[6]

The first recorded royal residence in Ladakh, built at the top of the high Namgyal ('Victory') Peak overlooking the present palace and town, is the now-ruined fort and the gon-khang (Temple of the Guardian Divinities) built by King Tashi Namgyal. Tashi Namgyal is known to have ruled during the final quarter of the 16th century AD.[7] The Namgyal (also called "Tsemo Gompa" = 'Red Gompa', or dGon-pa-so-ma = 'New Monastery'),[8] a temple, is the main Buddhist centre in Leh.[9] There are some older walls of fortifications behind it which Francke reported used to be known as the "Dard Castle." If it was indeed built by Dards, it must pre-date the establishment of Tibetan rulers in Ladakh over a thousand years ago.[10]

Below this are the Chamba (Byams-pa, i.e., Maitreya) and Chenresi (sPyan-ras-gzigs, i.e. Avalokiteshvara) monasteries which are of uncertain date.[8]

The royal palace, known as Leh Palace, was built by King Sengge Namgyal (1612–1642), presumably between the period when the Portuguese Jesuit priest, Francisco de Azevedo, visited Leh in 1631, and made no mention of it, and Sengge Namgyal's death in 1642.[11]

The Leh Palace is nine storeys high; the upper floors accommodated the royal family, and the stables and store rooms are located on the lower floors. The palace was abandoned when Kashmiri forces besieged it in the mid-19th century. The royal family moved their premises south to their current home in Stok Palace on the southern bank of the Indus.

"As has already been mentioned, the original name of the town is not sLel, as it is now-a-days spelt, but sLes, which signifies an encampment of nomads. These [Tibetan] nomads were probably in the habit of visiting the Leh valley at a time when it had begun to be irrigated by Dard colonizers. Thus, the most ancient part of the ruins on the top of rNam-rgyal-rtse-mo hill at Leh are called 'aBrog-pal-mkhar (Dard castle) . . . ."[12] 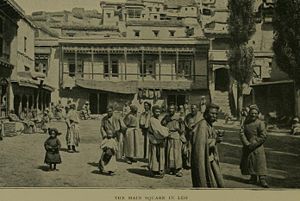 LAHDC was constituted in 1995. The conception of the council was conceived so as to provide a transparent development in the area. It has 30 councilors, 4 nominated and 26 elected. The Chief Executive Councilor heads and chairs this council.

Coexistence with religions other than Buddhism

Since the 8th century people belonging to different religions, particularly Buddhism and Islam, have been living in harmony in Leh. They coexisted from the time of early period of Namgyal dynasty and there has been no mention of any conflict between them.[citation needed] But with the opening of Ladakh to the outside world and politics creeping into peaceful Ladakhi society, the issue of religion has emerged and stained this long tradition of coexistence and co-evolution.

In recent times, relations between the Buddhist and Muslim communities soured due the petty conflicts motivated by political interest.[citation needed] With the visit of the Dalai Lama in August 2003 and his strong appeal to the masses regarding religious pluralism and peaceful coexistence, the situation has ameliorated and normalcy has been restored. Thus, Ladakh resumed its age-old tradition of cohesiveness.

Besides these two communities there are people living in the region who belong to other religions such as Christianity, Hinduism, and Sikhism, who too live in harmony and form a vital part of the society. The small Christian community in Leh are descendants of converts from Tibetan Buddhism by German Moravian missionaries who established a church at Keylong in Lahaul in the 1860s, and were allowed to open another mission in Leh in 1885 and had a sub branch in Khalatse. They stayed open until Indian Independence in 1947. In spite of their successful medical and educational activities, they made only a few converts.[13]

Every year Sindhu Darshan Festival is held at Shey, 15 km away from town to promote religious harmony and glory of river Sindhu. At this time, Leh is packed with thousands of tourist coming from all over India, as well foreign countries.[14]

Threats to the Old Town of Leh

The old town of Leh was added to the World Monuments Fund's list of 100 most endangered sites due to increased rainfall from climate change and other reasons.[15] Neglect and changing settlement patterns within the old town have threatened the long-term preservation of this unique site.[16]

Mountains dominate the landscape around the Leh as it is at an altitude of 3,500m. The principal access roads include the 434 km Srinagar-Leh highway which connects Leh with Srinagar and the 473 km Leh-Manali Highway which connects Manali with Leh. Both roads are open only on a seasonal basis.[17] Although the access roads from Srinagar and Manali are often blocked by snow in winter, the local roads in the Indus Valley usually remain open due to the low level of precipitation and snowfall.

Leh has a cold desert climate (Köppen climate classification BWk) with long, harsh winters from October to early March, with minimum temperatures well below freezing for most of the winter. The city gets occasional snowfall during winter. The weather in the remaining months is generally fine and warm during the day. Average annual rainfall is only 90 mm (3½ inches). The temperature can range from −28 °C (-18.4°F) in winter to 33 °C (91.4°F) in summer.[18] In 2010 the city experienced flash floods which killed more than 100 people.[19]

Leh is located at an average elevation of about 3500 metres, which means that only one crop a year can be grown there, while two can be grown at Khalatse. By the time crops are being sown at Leh in late May, they are already half-grown at Khalatse. The main crop is grim (naked barley - Hordeum vulgare L. var. nudum Hook. f., which is an ancient form of domesticated barley with an easier to remove hull) - from which tsampa, the staple food in Ladakh, is made.[21] 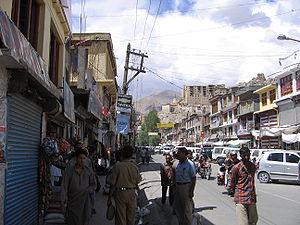 Leh District, which comprises the whole of Indian-administered eastern Ladakh (but not Kargil nor Zanskar) has a total population of 117,000 people[23] according to the 2001 census. Of that, 77.3% is Buddhist, 13.8 % Muslim, 8.2% Hindu and 0.8% others. The Muslim presence dates back to the annexation of Ladakh by Kashmir, after the Fifth Dalai Lama attempted to invade Ladakh from Tibet. Since then, there has been further migration from the Kashmir Valley due firstly to trade and latterly with the transfer of tourism from the Kashmir Valley to Ladakh.

Leh is connected to the rest of India by two high-altitude roads both of which are subject to landslides and neither of which are passable in winter when covered by deep snows. The National Highway 1D from Srinagar via Kargil is generally open longer. The Leh-Manali Highway can be troublesome due to very high passes and plateaus, and the lower but landslide-prone Rohtang Pass near Manali.

The overland approach to Ladakh from the Kashmir valley via the 434-km. Srinagar-Leh road typically remains open for traffic from June to October/November. The most dramatic part of this road journey is the ascent up the 3,505 m (11,500 ft.) high Zoji-la, a tortuous pass in the Great Himalayan Wall. The Jammu & Kashmir State Road Transport Corporation (JKSRTC) operates regular Deluxe and Ordinary bus services between Srinagar and Leh on this route with an overnight halt at Kargil. Taxis (cars and jeeps) are also available at Srinagar for the journey.

Since 1989, the 473-km[citation needed] Manali-Leh road has been serving as the second land approach to Ladakh. Open for traffic from June to late October, this high road traverses the upland desert plateaux of Rupsho whose altitude ranges from 3,660 m to 4,570 m. There are a number of high passes en route among which the highest one, known as Tanglang La, is sometimes (but incorrectly) claimed to be the world’s second highest motorable pass at an altitude of 5,325 m. (17,469 feet). See the article on Khardung La for a discussion of the world's highest motorable passes.

Leh's Leh Kushok Bakula Rimpochee Airport has flights to Delhi at least daily on Kingfisher, Jet Airways and/or Indian Airlines which also provides twice weekly services to Jammu and a weekly flight to Srinagar. Connect in Delhi for other destinations.

There are no railways currently in Ladakh, however a railway is proposed. See Kashmir_Railway#Bilaspur-Manali-Leh_railway_line for more information.