Tsomoriri or Lake Moriri (official name: Tsomoriri Wetland Conservation Reserve), in the Changthang (literal meaning, northern plains) area, is a High Altitude Lake (HAL) with an altitude of 4,595 m (15,075 ft) in Ladakh, India and is the largest of the High Altitude Lakes in the Trans-Himalayan biogeographic region, entirely within India. It is hemmed between Ladakh in the North and Tibet in the east and Zanskar in the west; the Changthang plateau is the geographical setting with snow peaks that provides the source of water for the Lake. Accessibility to the lake is limited to summer season only.[1] Tsokar means salty lake in local language and salt was extracted from this lake in earlier times, till the end of 1959, for consumption by the local people. It is oligotrophic in nature and its waters are alkaline. The lake formerly had an outlet to the south, but it has contracted considerably and has become land locked; as a result; the water is now brackish to saline. The lake is fed by springs and snow-melt in two major stream systems, one entering the lake from the north, the other from the southwest. Both stream systems create extensive marshes where they enter the lake.

As per a classification of the Himalayan Lakes done on the basis of their origin, there are four groups and Tsomoriri falls under the third group of “Remnant Lakes". The classification as reported states:[2]

(i) Glacial lakes which are formed in and around glaciers; (ii) Structural lakes, formed by folds or faults due to movements in earth’s crust (e.g. Nainital lake in Uttaranchal), (iii) Remnant lakes which were originally structural but represent the remnants of vast lakes (e.g., Tsomoriri, Tso Kar, Pangong Tso in Ladakh, and Dal Lake in Kashmir), (iv) Natural dammed lakes i.e., temporary water bodies formed along the river courses due to deposition of rocks or debris e.g. Gohna Tal in Garhwal, Uttaranchal.

The Changthang plateau in the eastern Ladakh represents a landscape of low productive Ecosystems which protects unique floral and faunal species.The area is an extension of the western Tibetan plateau that lies above 4,500 m (14,800 ft) msl and supports diverse but low populations of several globally threatened mammals.[2] The Lake's basin could also be categorised as an endorheic basin since it is a closed drainage basin that retains water and allows no outflow to other bodies of water such as rivers or oceans. 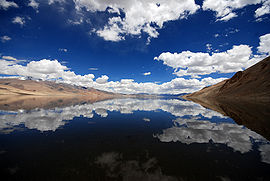 The lake is surrounded by the elevated valley of Rupshu with hills rising to 6,000 m (20,000 ft). “Changpas", the nomadic migratory shepherds (pastoral community) of yak, sheep, goat, and horses of Tibetan origin and who are engaged in trade and work on caravans in Ladakh region, are the main inhabitants of the area.[3][4] Changpa herders use the land of this valley as grazing ground and for cultivation.[2]

The Working Report (2006) of the Planning Commission of the Government of India also reports:[2]

Despite a poor vegetation cover, relatively low standing biomass and high anthropogenic pressure, this area sustains a considerably high livestock population. Steady increase in the livestock population in the area is mainly attributed to influx of nomadic herders from Tibet during recent decades and promotion of Pashmina goat production by the Animal Husbandry Department (AHD) for fine quality under wool (Pashmina). The herders and AHD officials, in recent years have begun to raise concern over degradation of pastures, resultant shortage of forage, and mass mortality of livestock during severe winters.

The Korzok Monastery, on the western bank of the lake is 400 years old and attracts tourists and Buddhist pilgrims. Tourism during May – September attracts large number of foreign and local tourists even though tented accommodation is the facility available, apart from a small PWD guest house close to the Lake.[1]

The lake is located to the Southeast of Leh in Eastern Ladakh, Jammu & Kashmir, at a road distance of 215 kilometres (134 mi). Leh is also connected by Air with many destinations in India. 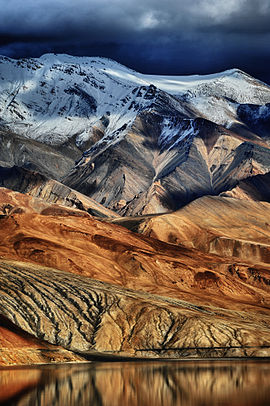 The Lake, draining a catchment area of 120 km2 (46 sq mi) is enclosed by rolling hills of the Tibetan cold desert on the western side with steep hills and by the Pare Chu, which flows on the southern side. Another wetland, the Nuro Sumdo (with a catchment area of 20 km2/7.7 sq mi), lies between Tsomoriri in the north, and the Pare Chu in the south, a bog which drains into the Pare Chu. Several small mountain streams feed the Lake notably through pasture land at Peldo Le. The lake is fed by springs and snow melt and has a maximum depth of 40 m (130 ft). Aridity and cold desert conditions prevail in the lake region; with summer temperature varying from 0 ° to 30 °C (32 °-86 °F) and winter temperature recording −10 ° and −40 °C (14 ° to -40 °F). Geologically the lake is in the Cambrian/Pre-Cambrian terrain.[5][6] 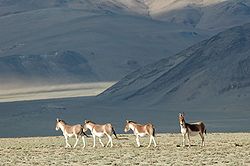 Tibetan Ass in the vicinity of Tsomoriri Lake

An avifaunal survey of the Lake and its adjoining Nuro Sumdo wetland conducted in July 1996 revealed the following facts:[5][6]

While the deeper parts of the lake have no vegetation, the shallow areas are reported to have Potamogeton sps. Marshes have several species of sedges and reeds, particularly Carex, Caragana and Astragalus sps., which are all representative of the surrounding arid steppe vegetation. Details of the Vegetation recorded in the area comprises the following:[6]

Largely based on the ecological diversity of the Lake (explained in the previous section) and its surroundings, the Tsomiriri was notified in November 2002 under the List of Ramsar Wetland sites under the Ramsar Convention. The justification could be summarized as:[6] 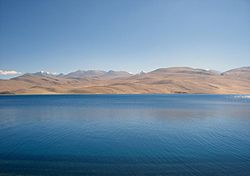 Threats to the lake

The need for evolving a strategy and an action plan to preserve the extreme fragility of the lake ecosystem has been recognized with the needed emphasis at the National and International level to develop the lake conservation activity with participation of all stakeholders.[7] The actions initiated in this direction are:

Tsomoriri is an administratively declared Wetland Reserve. Legally, shooting wildlife is prohibited. The State Department of Wildlife has set up a check post near Mahe Bridge at the entrance towards the lake.[5][6] WWF-India Project has established a field office at Korzok in Rupshu near Tsomoriri for ‘Conservation of High Altitude Wetlands in Ladakh Region’ to carry out surveys, interact with tourists, tour guides, act as information centre and conduct education awareness programmes for locals, tourists etc.

Wildlife Institute of India has also set up a field station at Leh to carry out scientific research in the region. Nature clubs have been set up and Information booklet on the lake published. Efforts of WWF – India has also resulted in the local community declaring Tsomoriri as a ‘Sacred Gift for a Living Planet’ during the Annual Conference held in Nepal in November 2000.[6]

Some of the other achievements so far reported on the Lake’s conservation are:[7]

The Indian Army has committed to support and set up a Nature Interpretation Centre at 'Hall of Fame', Leh.

World Wildlife Fund for Nature — India (WWF-India) is spearheading the efforts at conservation of the Tsomoriri lake in particular, and the Ladakh region in general. WWF’s activities as a NGO have spanned more than 30 years. The main objective set by WWF is[8] the main activities planned for the Tsomoriri and other wetlands in Ladakh regions are:[7]

The Promotion of Nature Conservation and Environmental Protection as the Basis for Sustainable and Equitable Development.