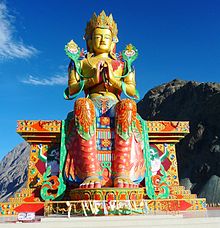 32 metre statue of Maitreya Buddha near Diskit Monastery facing down the Shyok River towards Pakistan.

Diskit Monastery also known as Deskit Gompa or Diskit Gompa is the oldest and largest Buddhist monastery (gompa) in the Nubra Valley of Ladakh, northern India.[1][2]

It belongs to the Gelugpa (Yellow Hat) sect of Tibetan Buddhism. It was founded by Changzem Tserab Zangpo, a disciple of Tsong Khapa, founder of Gelugpa, in the 14th century.[3][4] It is a sub-gompa of the Thikse gompa.

Lachung Temple and Hundur Monastery are also located nearby, the latter is below the main road near a bridge.[3][4]

The monastery has statue of Maitreya Buddha in the prayer hall, a huge drum and several images of fierce guardian deities. An elevated cupola of the moanstery depicts a fresco of the Tashilhunpo Monastery of Tibet.

The Monastery administration runs a school, with support from a Non-Government Organization (NGO) known as the "Tibet Support Group", which has computer facilities and teaches scienece subjects, in English, to Tibetan children of the region.

A popular festival known as Dosmoche or the "Festival of the Scapegoat" is held in the precincts of the monastery in February during the winter season, which is largely attended by people from villages of the Nubra valley since the other regions in Leh are inaccessible during this period due to heavy snow fall. 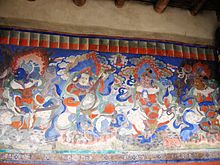 A renovated mural depicting the Four Heavenly Kings opposite a prayer hall (2009). The same mural is seen in a ruined stage in the 2004 photo (below, in Structures) at the top of the stairs.

The Diskit monastery was founded by Changzem Tserab Zangpo in the 14th century.[4] The history of the Nubra Valley and the monastery could thus be traced from 14th century onwards. Ladakh was then ruled by King Grags-pa-‘bum-lde (1400–1440) and his brother, who unsuccessfully attempted to usurp Nubra Valley, which was under a local ruler named Nyig-ma-grags-pa. The local ruler assisted a Gelugpa order advocate to build the monastery at Diskit and deify the idol of Tsong Khapa, the founder of the Gelugpa sect, in the monastery. During the rule of King Blogros-chog-idan (1440–1470) who had even controlled western Tibet, Panchen Lha-btsun - a resident of Nubra Valley by birth - studied in Tibet and later became a regent to the founder of Tashilhunpo Monastery and finally during his last stage of life returned to Nubra. His remains have been preserved in Charas. In 1500, Ladakh was ruled by Bkra-shis-rnam-rgyal, who fought the invader Mirza Haider of Central Asia, in Nubra and close to Leh, finally defeated the latter and thus bringing Nubra under Ladakh King’s rule. Even then, the local chieftains still yielded power in Diskit and Hundar. Shia Muslims started settling in Nubra after this war. Bkra-shis-rnam-rgyal’ son, Tshedbang-rnam-rgyal ruled Ladakh from 1530 and expanded his kingdom. At that time, Nubra people prevailed on him and preventing him from invading Hor in Xinjiang, as trade with Yarkand was considered crucial to Nubra. During the reign of Jams-dbang-rnam-rgyal, historical records indicate that a regular tribute payment was made by the Nubra people to the king. The King Bde-‘Idanrnam-rgyal (1620–45) successfully defeated Baltistan and the Mughals. Rgyal kings were very religious and built mani walls throughout their kingdom. Monks were specially engaged to recite religious hymns of Mani-tung chur in Nubra Valley and in other surrounding areas. In mid eighteenth century, Tshe-dbang-rnam-rgyal gave away the control of Diskit monastery to the Rinpoche of Thikse Monastery and this arrangement has been perpetuated to this day. Since then, Diskit is considered a sub-gompa of Thikse.[5] 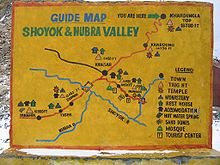 Location of Diskit and Khardong La pass in the Nubra Valley

The Diskit monastery is situated on the hill, just above the flood plains of the Shayok River, on its right bank in the Diskit village (3,144 metres (10,315 ft)) in Nubra Valley. Nubra River is a tributary of the Shyok River, which flows parallel to the Indus river on the northern side of the Ladakh range. Since the valley is at lower elevation, it has a mild climate. This climatic condition has created lush vegetation in the valley and the valley is, therefore, called the “Orchard of Ladakh". The valley was part of the Caravan Route between Tibet and China. It has various trekking sites, along the countryside. The valley is also the natural home of the double backed Bactrian Camel. It is located trans Leh, beyond the snow clad Khardong La pass. Since the snow clad mountains become unpassable many times during winter, Diskit village and the monastery in the valley have become the congregation centre for people of the region of the valley. Diskit is the headquarters of the Nubra Valley and thus has lot of government offices with basic facilities. It is also connected by road with Leh.[6][7][8] 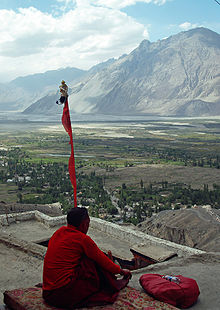 A monk meditates on terrace of Diskit monastery, with Nubra Valley and Diskit village seen in the background

The approach road to the monastery is from the Diskit village through a rugged and dusty road that crosses a stream in the middle of the village. The village is approachable from Leh by road via the Khardung pass. The traffic on this road may be disrupted between October and May due to snow fall and landslides. This road is claimed to be the highest motorable road in the world. The road from Leh passes through South Pullu (an army camp), then to Khardung La (5,602 metres (18,379 ft)), goes down to the North Pullu (foreign visitors have to register their entry to Nubru Valley), moves down to the Khardung village, slopes down to the Khalsar village in the valley floor and then bifurcates into two branches. The left branch from Khalsar village leads to the Diskit and Hunder villages, while the right branch road leads to Sumur and Panamik villages.[7] Leh to Diskit is 150 kilometres (93 mi) by road which is maintained by the Indian Army'.[9] 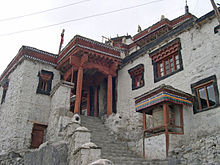 Approach to the Monastery

Diskit Monastery has been built at the edge of the approach road. This road links with Parthapur and Those. Approach to the monastery is through a flight of steps made of stones, which lead to the prayer hall of the monastery. A statue of Maitreya Buddha is enshrined in the hall. There is a huge drum located within the hall. In the chamber on the second floor, there are many images of fierce guardian deities.[7]

Diskit Monastery also has an elevated cupola, with a fresco depicting the Tashilhunpo Monastery of Tibet. It also has a number of shrines and Mongolian and Tibetan texts in the storehouse.[3] Diskit Monastery is connected to Mongol mythology in that the monastery is believed to be the place where an evil anti-Buddhist Mongol demon once lived and was killed near the monastery grounds but is said to have been resurrected several times.[3] Today, the wrinkled head and hand of the demon are believed to lie inside a temple in the monastery.[3] The Lonely Planet India guide describes that the gompa roof offers "glorious" views of the Nubra Valley.[1]

Recent extensions to the monastery building are in good shape but the Dukhang ("main prayer hall") and Zimcchungh are not in good condition. Paintings have been covered with soot and images are kept in total disorder. The older part of the monastery is said to be in certain degree of decay, as cracks have been observed, and they remain untended.[10]

The photong or official residence of the Chief Lama of Nubra is located at the foot hill where there is also a very large statue of Jampa (Maitreya) Buddha.[7]

This impressive 32 metre (106 foot) statue on top of a hill below the monastery, faces down the Shyok River towards Pakistan and, according to Mr. Tsering Nophel, chairman of the committee which organised it, most of the money came from local donations. The Head of the Gelugpa, Ganden Thipa (the reincarnation of Tsongkhapa), and Abbott of Rizu Monastery, gave 8 kg of gold for its decoration. It is the first time a Ladakhi monk has been the head of the Gelugpa sect.

The statue's construction was started in April 2006 and it was consecrated by H.H. the Dalai Lama on 25th July, 2010. Mr. Nophel says the statue was built with three main functions in mind - protection of Diskit Village, prevention of further war with Pakistan, and to promote world peace.

Lachung temple is close but above the Diskit monastery, and is said to be one of the oldest temples in the Nubra Valley where a large idol of Tsong Khapa is deified and a Gelugpa yellow hat crowns the image.[4]

The monastery, which houses about 100 monks, runs a school in its precincts. This school teaches Tibetan children. The school has been upgraded recently to enable teaching of scientific subjects with support from the Lungta, a 'Tibet Support Group' (a Non Governmental Organization -NGO) who have created computer facilities in the school. Lungta has trained the monks of the monastery in computer skills and in the English language so that they could in turn teach the children of the school. Further additions to the school library in the form of dictionaries, encyclopaedias and English teaching materials are being provided.[11] 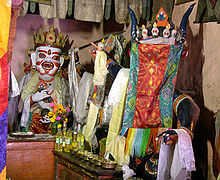 Statues of Guardian deities, whose heads are uncovered only during the festival.

Desmochhey or Dosmoche, also known as "Festival of the Scapegoat" is the popular prayer festival that is celebrated at Dikshit Monastery and also at Likir in Leh. Since the festival is celebrated in February during the winter season, when snowbound Khardon peak is not passable to attend similar festivities at Likir monastery in Leh, large crowds from villages in the Nubra Valley assemble at Diskit to witness the mask dance. The mask dance is performed by the Lamas of the Monastery to dramatically express the superiority of good over evil forces. The dances are believed to avoid ill-fortune in the new year (Tibetan new year is celebrated in December/January). On this occasion, images made of dough are thrown out to deter any disaster occurring and to usher peace and prosperity to the people. The cloths covering the heads of deity statues are removed in this period.[1][6][7]