North Karnataka (Kannada: ಉತ್ತರ ಕರ್ನಾಟಕ) is an arid plateau from 300 to 700 metres (980 to 2,300 ft) elevation in the Karnataka state of southwest India. It is drained by the Krishna River and its tributaries the Bhima, Ghataprabha, Malaprabha, and Tungabhadra. North Karnataka lies within the Deccan thorn scrub forests ecoregion, which extends north into eastern Maharashtra. 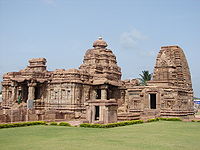 North Karnataka is known for its freedom fighters, social reformers, Hindustani musicians and figures in literature, law, science and technology. It has many Jain monuments from the Kadambas, Rashtrakutas, Badami Chalukyas, Kalyani Chalukyas, Sevuna and Vijayanagara periods (Karnataka Through Centuries).[1] Aihole is known as the cradle of Hindu rock architecture with over 125 temples and monuments, including Rashtrakuta monuments at Lokapura, Bilgi and Kuknur; Kalyani Chalukyas monuments built in the Gadag style at Lakkundi, Gadag and the Koppal District and the Vijayanagar empire temples at Vijayanagara. Badami Chalukyas monuments at Pattadakal, Aihole, and Badami are also well-known. Hampi, in the Bellary District, has some 54 World Heritage monuments and 650 national monuments. 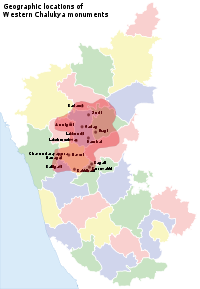 North Karnataka's history[2][3] and culture date back to prehistoric times. The earliest Stone Age find in India was a hand ax at Lingasugur, in Raichur district. Sangankal Hills in the Bellary district, which is known as the earliest village settlement of South India,[4] dates back to the Neolithic period. Iron weapons from 1200 BC, found at Hallur in Dharwad district, demonstrate that North Karnataka used iron earlier than northern India.[5] Prehistoric sites in North Karnataka include rock shelters in Bellary, Raichur and Koppal districts with red paintings[6] which include figures of wild animals. The paintings are done in such a way that the walls of caves are not facing northwest, so the northwest monsoon does not affect them. These rock shelters are found at Kurgod, Hampi in Bellary district and Hire Benakal, near Gangavati in the Koppal district. Burial chambers using granite slabs (known as dolmens) are also found; the best examples are the dolmens of Hire Benakal and Kumati in Hadagali Taluk.

Vibhuthihalli at Shahapur Taluk in the Yadgir district, an Archeological Survey of India ancient astronomy site, was created with megalithic stones. The stones, arranged in a square pattern with astronomical significance,[7] cover an area of 12 acres (4.9 ha). Ashoka's stone edicts, found in the state, indicate that major parts of Northern Karnataka were under the Mauryas. Many dynasties left their imprint upon the development of North Karnatakan art, among them the Chalukyas, the Vijayanagara Empire and the Western Chalukyas. 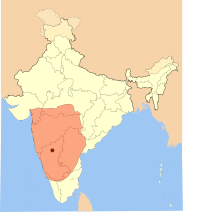 Chalukya rule is important in the development of architecture known as Karnata Dravida. Hundreds of monuments built by the Chalukyas are found in the Malaprabha river basin (mainly in Aihole, Badami, Pattadakal and Mahakuta, in Karnataka). They ruled an empire extending from the Kaveri in the south to the Narmada in the north. The Badami Chalukya dynasty was established by Pulakesi I in 543; Vatapi (Badami) was the capital.[8] Pulakesi II was a popular emperor of the Badami Chalukya dynasty. He defeated Harshavardhana on the banks of the Narmada river, and defeated Vishnukundins in the south. Vikramaditya I, known as Rajamalla and for building temples, engraved a Kannada inscription on the victory pillar at the Kailasanatha Temple. Kirtivarman II was the last Badami Chalukya king, overthrown in 753 by the Rashtrakuta King Dantidurga. 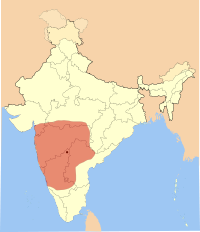 The Western Chalukya dynasty is sometimes called the Kalyani Chalukyas, after its regal capital at Kalyani (today's Basavakalyan in Karnataka) or the Later Chalukya from its theoretical relationship to the sixth-century Badami Chalukyas. The Western Chalukyas (Kannada: ಪಶ್ಚಿಮ ಚಾಲುಕ್ಯ ಸಾಮ್ರಾಜ್ಯ) developed an architectural style (also called Gadag style) known today as a transitional style, an architectural link between the early Chalukya Dynasty[9] and the later Hoysala empire. The Chalukyas built some of the earliest Hindu temples in India. The best-known examples are the Mahadeva Temple (Itagi) in the Koppal District; the Kasivisvesvara Temple at Lakkundi in the Gadag District and the Mallikarjuna Temple at Kuruvatti and the Kallesvara Temple at Bagali, both in the Davangere District. Monuments notable for craftsmanship are the Siddhesvara Temple at Haveri in the Haveri District, the Amrutesvara Temple at Annigeri in the Dharwad District, the Sarasvati Temple in Gadag, and the Dodda Basappa Temple at Dambal (both in the Gadag district). Aihole was an experimental base for architectural creation. 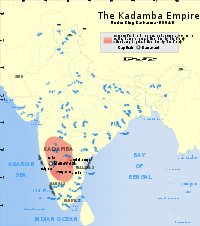 The Kadambas (Kannada: ಕದಂಬರು) were an ancient dynasty of South India who primarily ruled the region which is the present-day Goa state and the nearby Konkan region (part of modern Maharashtra and Karnataka state). The early rulers of this dynasty established themselves at Vaijayanti (or Banavasi) in 345 AD and ruled for more than two centuries. In 607, the Chalukyas of Vatapi sacked Banavasi, and the Kadamba kingdom was incorporated into the expanding Chalukyan empire. In the eighth century, the Chalukyas were overthrown by the Rashtrakutas, who ruled until the 10th century. In 980, descendants of the Chalukyas and Kadambas revolted against the Rashtrakutas; the Rashtrakuta empire fell, resulting in the establishment of a second Chalukyan dynasty (known as the Western Chalukyas). Chatta Deva, a member of the Kadamba family who helped the Western Chalukyas in this coup, re-established the Kadamba dynasty. He was primarily a vassal of the Western Chalukyas, but his successors enjoyed considerable independence and were well-placed in Goa and Konkan until the 14th century. The successors of Chatta Deva occupied both Banavasi and Hangal, and are known as the Kadambas of Hangal. Later, the Kadambas paid nominal allegiance to the other major powers of the Deccan Plateau (such as the Yadavas and Hoysalas of Dorasamudra) and maintained their independence. Four families of Kadambas ruled in southern India: the Kadamba of Hangal, Goa, Belur and Banvasi.[10] 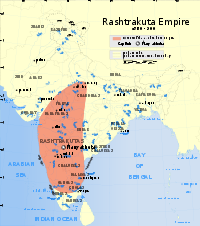 During the rule of Dantidurga, an empire was built with the Gulbarga region in modern Karnataka as its base. This clan came to be known as the Rashtrakutas of Manyakheta (Kannada: ರಾಷ್ಟ್ರಕೂಟ), who rose to power in 753.[11][12] During their rule, Jain mathematicians and scholars contributed important works in Kannada and Sanskrit. Amoghavarsha I was the best-known king of this dynasty and wrote Kavirajamarga, a landmark Kannada work. Architecture reached a high-water mark in the Dravidian style, the best examples of which are seen in the Kailash Temple at Ellora, the sculptures of Elephanta Caves in modern-day Maharashtra and the Kashivishvanatha and the Jain Narayana Temples at Pattadakal in modern North Karnataka (all of which are UNESCO World Heritage Sites). Scholars agree that the kings of the imperial dynasty in the eighth to tenth century made the Kannada language as important as Sanskrit. Rashtrakuta inscriptions appear in both Kannada and Sanskrit, and the kings encouraged literature in both languages. The earliest existing Kannada literary writings are credited to their court poets and royalty. Kailash Temple is an example of Dravidian art. This project was started by Krishna I (757–773) of the Rashtrakuta dynasty which ruled from Manyakheta in modern Karnataka. It is located 40 km from the city of Manyakheta (modern Malkhed), on the banks of the Kagini River in Gulbarga district.

Vijayanagara[13][14] (Karnata Empire, or Karnataka Empire) is considered the greatest medieval Hindu empire and one of the greatest in the world at that time. It fostered the development of intellectual pursuits and the fine arts. Abdur Razzaq (the Persian ambassador) said, "The eye of the pupil has never seen a place like it and the ear of intelligence has never been informed that there existed anything to equal it in the world".

The Vijayanagara Empire, with its capital at Hampi, fell victim to the army of the Deccan Sultanates[15] in 1565. As a consequence of this, Bijapur became the most important city of the region. It is a land of monuments; perhaps no other city except Delhi has as many monuments as Bijapur. Bahmani Shahis and Adil Shahis (Bahmani Sultanate) of Bijapur have played an important role in the history of Karnataka with their contributions to art and architecture and their propagation of Islam in the state. The Bidar Sultanate was part of the Deccan sultanates, which were founded by Qasim Barid. 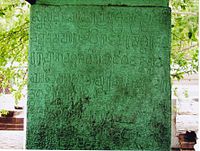 The following are the princely states of British India: 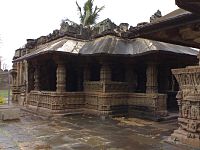 North Karnataka has contributed to various styles of Indian Architecture during the rule of the Kadamba, Badami Chalukyas, Western Chalukya, Rashtrakuta and Vijayanagara empires:

Kannada is one of the oldest Dravidian languages, with an age of at least 2,000 years. The spoken language is said to have separated from its proto-Dravidian source later than Tamil, and at about the same time as Tulu. However, the archaeological evidence indicates a written tradition for this language of around 1,500–1,600 years. The initial development of Kannada is similar to that of other Dravidian languages and independent of Sanskrit. In later centuries, Kannada has been greatly influenced by Sanskrit in vocabulary, grammar and literary style.

As for the Dravidian race, the Monier-Williams Sanskrit Dictionary lists for the Sanskrit word draviḍa a meaning of a "collective name for Karnatakas, Gurjaras, Kannadigas and Mahārāstras".[16] North Karnataka has its own dialect of Kannada.

In Kannada, utsava means "festival". The following are festivals celebrated in North Karnataka: 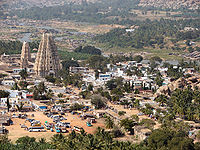 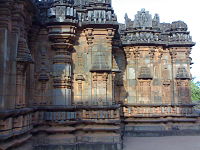 The temples of North Karnataka may be categorised as historical or modern.

Universities and other educational institutions

For more information, see List of educational institutions in Dharwad.

Rambhau Kundgolkar was born in Kundgol, Karnataka, 15 km from Hubli on the Banglore Hubli Railway route. He was a disciple of Ustad Abdul Karim Khan of Kirana Gharana. The contribution of Sawai Gandharva to Indian classical music is by encouraging disciples such as Pandit Bhimsen Joshi, who was inspired to create Santwani from Sawai Gandharva's bhajans. His other disciples are Dr. Gangubai Hangal, Sangameshwar Gurav and Pandit Firoz Dastur. The Sawai Gandharva Sangeet Samaroh was held at his birthplace of Kundgol. The kirana gharana tradition has been continued by Madhava Gudi of Dharwad, preeminent kirana gharana vocalist.

Kumar Gandharva has composed ragas such as Madh Surja, Chaiti Bhoop, Gandhi Malhar and several bandishes. Geet Varsha and Mala Umajalele Bal Gandharva are also his compositions. He did not accept the rigidity of the Gharana form.[citation needed]

Shivaputra Sidhharamaiya Komkali was born to a Lingayat family in Sulebhawi (near Belgaum), and imitated many singers during his childhood. At age eight, he went to Bombay and lived with Dr. B. R. Devdhar at his Deaodhar's Indian Music School near the Opera House; there he received his musical education and heard many singers, including Ustad Bade Gulam Ali Khan and Shine Khan. At a young age, he had a lung problem and had to change his gayaki singing style. He was not allowed to sing for two years; his first baithak took place at Puna where he sang well for an hour, with no adverse effects.

Garag, a small town located 15 km north of Dharwad, was the sole producer of the national flag and the hand-woven khadi for its manufacture. Hubballi Siree produces both silk and cotton sarees, worn by most villegers in North Karnataka and parts of Maharastra. The fabric is primarily woven in Gadag-Betigeri. Bellary has approximately 4,800 families employed in the textile industry.

The Hutti Gold Mine is the only gold-extraction company in India. It operates in Hatti, an ancient gold- mining area about 70 km from Raichur. Tourism is also permitted inside the mine.[23] The Gadag, Koppal and Bellary districts are rich in manganese, gold and iron ore. 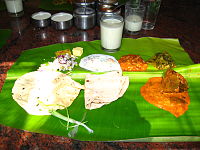 Wheat and jowar rottis (unleavened bread made with millet) are popular.

The following are typical items in a vegetarian Northern Karnataka meal:

and girmit made with murmure (a rice dish).

Buddhism in North Karnataka dates from the third to the first centuries BC. Sannati and Kanaganahalli are two important excavation sites, and there is a Tibetan Buddhist colony at Mundgod.

The followers of Basava, chief proponent of Shaivism in Karnataka, are known as Lingayats.