Transformers: Revenge of the Fallen is a film which has an associated toy line released in 2009 by Hasbro (Takara Tomy in Japan). The film, and thus the toy line, is based on the original Transformers media franchise. Releases in this toy line ran from May 2009 to early 2010. The 2007 toy line proved to be a retail hit, selling even 18 months after the first film was released.

The toy line continued on mid-2010 simply as Transformers (also known as Hunt for the Decepticons).

MechAlive is a feature available on selected Deluxe, Voyager and Leader Class figures, as well as Combiner Class Constructicon Devastator. Characteristics of this feature include visible moving gears in the character's body and parts that move independently during transformation and/or when certain limbs or body parts are moved.

Legends Class (sold in Japan as EZ Collection) figures are smaller (about 3 inches tall) versions of the film franchise's characters. The Constructicons in this line are capable of not only transforming into robots, but also able to combine into Devastator. All figures are new molds except where indicated. Hasbro and Takara Tomy are expected to produce more legends class figures in 2010, seeing as how they have sold very well so far.[3]

The Constructicons listed here are available individually only in the Japanese market. All other markets have them sold in the Constructicon Devastator gift pack (see Multi-Packs).

Scout Class toys are small-sized (about 4.5 inches tall) figures; many with simple transformation. 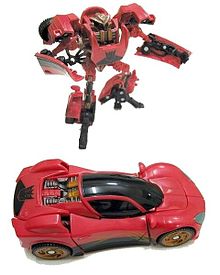 Revenge of the Fallen Detour toy 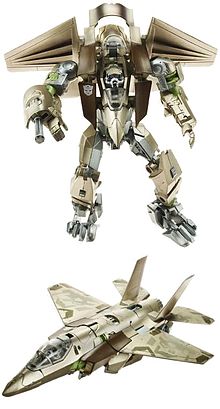 Revenge of the Fallen Breakaway toy

Deluxe Class figures (about 5.5 to 6 inches tall) comprise the bulk of the film's toy line. Many of these figures feature MechAlive technology. The Deluxe class Revenge of the Fallen toys were named one of the top 100 toys for under $10 in the 2009 holiday season by Walmart.[10] There were a total of 45 Deluxe Class characters in the line,[11] although it is uncertain if this number includes Bludgeon, Onslaught and Silverbolt, who are packaged in larger sets. 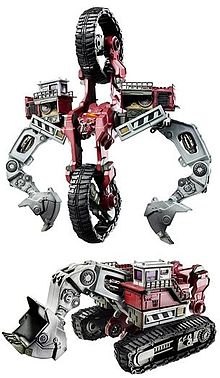 Leader Class figures are about 10 inches tall on average, and feature electronic lights and sounds, as well as MechAlive technology and intricate details.

Larger than the Leader Class, Ultimate Class figures feature electronic lights, sounds and animatronic motion. Currently, Bumblebee is the only figure offered in this line.

The largest toy in the line, Combiner Class Devastator consists of six Constructicons (two Deluxe-size, two Voyager-size and two Leader-size) that combine into one supreme-sized robot. MechAlive feature consists of movable mouth with lights and sounds. None of the individual vehicles transform into robots. The set does not include Overload, the seventh Constructicon. In Japan, made by Takara Tomy, there is a red faced variant of Devastator. The red face makes it more of a movie accurate look, but the paint is very light and that is the only difference between the two Devastators. This Devastator is on sale at bigbadtoystore.com. So far, that is the only site online that has this Devastator. This toy was chosen by Toys-R-Us as one of the hot hots to the 2009 Holiday season.[29]

Human Alliance is a new toy line consisting of a Voyager class figure with a poseable 2" driver figure that fits on the figure's seats or can be posed to man the figure's auxiliary weapons. Autobot Skids and Mudflap come with Arcee and Chromia figures, respectively - which transform into motorcycles that can also pose with the driver figures. Scale-wise, they are roughly 1/26 - just slightly smaller than the 1/24 scale Transformers: Alternators figures. Barricade and Frenzy were released in January 2010, and Mudflap, Chromia, and Simmons were released in March.

Robot Heroes are non-poseable, non-transforming figurines depicting the robots in a more child-friendly design. Each package is sold in pairs.

Screen Battles - Boxed sets featuring multiple figures in a mini-diorama that recreates a scene from both films.[33]

Gravity Bots are 3-inch vehicle figures that automatically transform when they are tilted upright.

Fast Action Battlers are Deluxe class figures with simple transformation and a more toy-like design for younger children. All figures are new molds except where indicated.

Robot Replicas are deluxe-sized, non-transformable action figures; many of which are more movie-accurate than their transforming counterparts.

RPMs: Robot Powered Machines is a line that is more vehicle-oriented.

At approximately the size of a Hot Wheels car, each diecast vehicle has a molded illustration of their robot mode on their undercarriage. Available in single or twin packs. Due to licensing issues, the diecast car of Sideswipe is not a Chevrolet Corvette Stingray concept; instead, it is a sports car resembling a Mitsubishi Eclipse and an Aston Martin DB9.

Each controller is shaped like the character's robot form and emits sound effects and voice clips.

Replacing the Cyber Slammers line of the first film, Battle Chargers are toy cars with pullback motors and sound effects. When they hit an object, their roofs transform into their robot modes. The line gets its name from a subset of Generation 1 Decepticons that instantly transformed from cars to robots.[44]

The Lights & Sounds line features non-transformable toy cars with pull-back action and electronic light and sound effects. Like the diecast line, each car has a molded illustration of their robot mode on their undercarriage.[45]