A bed bug can individually and collectively cause a number of health effects including skin rashes, psychological effects and allergic symptoms.[1] Bed bug bites or cimicosis may lead to a range of skin manifestations from no visible effects to prominent blisters.[2]:446 Diagnosis involves both finding bed bugs and the occurrence of compatible symptoms.[1] Treatment involves the elimination of the insect but is otherwise symptomatic.[1]

Because infestation of human habitats has been on the increase in developed countries, bed bug bites and related conditions have been on the rise as well, since the 1980s-1990s.[3][4] The exact causes of this resurgence remain unclear; it is variously ascribed to greater foreign travel, more frequent exchange of second-hand furnishings among homes, a greater focus on control of other pests resulting in neglect of bed bug countermeasures, and increasing resistance to pesticides.[4][5] Bed bugs have been known human parasites for thousands of years.[3]

Individual responses to bites vary, ranging from no visible effect (in about 20-70%)[1][3] to small macular spots, prominent wheals and bullae formation along with intense itching that may last several days.[1] A central hemorrhagic spot may also occur due to the release of anticoagulants in the saliva.[4]

Symptoms may not appear until some days after the bites have occurred.[1] Reactions often become more brisk after multiple bites due to possible sensitization to the salivary proteins of the bed bug.[3] The skin reaction usually occurs in the area of the bite which is most commonly the arms, shoulders and legs as they are more frequently exposed at night.[1] Numerous bites may lead to an erythematous rash or urticaria.[1]

Serious infestations and chronic attacks can cause anxiety, stress, and insomnia.[1] Development of refractory delusional parasitosis is possible, as a person develops an overwhelming obsession with bed bugs.[6]

A number of other symptoms may occur from either the bite of the bed bugs or from their exposure. Anaphylaxis from the injection of serum and other nonspecific proteins has been rarely documented.[1][7] Due to each bite taking a tiny amount of blood, chronic or severe infestation may lead to anemia.[1] Bacterial skin infection may occur due to skin break down from scratching.[1][8] Systemic poisoning may occur if the bites are numerous.[9] Exposure to bed bugs may trigger an asthma attack via the effects of airborne allergens although evidence of this association is limited.[1] There is no evidence that bed bugs transmit infectious diseases[1] even though they appear physically capable of carrying pathogens and this possibility has been investigated.[1][3] The bite itself may be painful thus resulting in poor sleep and worse work performance.[1] 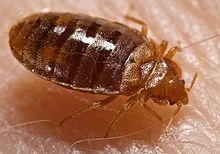 Bed bug bites are caused by bed bugs primarily of two species Cimex lectularius (the common bed bug) and Cimex hemipterus.[3] Infestation is rarely due to a lack of hygiene.[10] These insects feed exclusively on blood and may survive a year without eating.[3] They are attracted by body warmth and carbon dioxide.[4] Transfer to new places is usually in the personal effects of the human they feed upon.[3]

A definitive diagnosis of health effects due to bed bugs requires a search for and finding of the insect in the sleeping environment as symptoms are not sufficiently specific.[1] Other possible conditions with which these conditions can be confused include: scabies, allergic reactions, mosquito bites, spider bites, chicken pox and bacterial skin infections.[1] Bed bugs classically form a line of bites colloquially referred to as "breakfast, lunch, and dinner" and rarely feed in the armpit or behind the knee which may help differentiate it from other biting insects.[4] If the number in a house is large a pungent sweet odor may be described.[4]

Treatment requires keeping the person from being repeatedly bitten and possible symptomatic use of antihistamines and corticosteroids (either topically or systemically).[1] There however is no evidence that medications improve outcomes and symptoms usually resolve without treatment in 1–2 weeks.[3][4]

Avoiding repeated bites can be difficult, since it usually requires eradicating bed bugs from a home or workplace; eradication frequently requires a combination of pesticide and non pesticide approaches.[3] Pesticides that have historically been found to be effective include: pyrethroids, dichlorvos and malathion.[4] Resistance to pesticides has increased significantly over time and there are concerns of negative health effects from their usage.[3] Mechanical approaches such as vacuuming up the insects and heat treating or wrapping mattresses have been recommended.[3]

Bed bugs occur around the world.[11] Rates of infestations in developed countries while decreasing from the 1930s to the 1980s have increased dramatically since the 1980s.[3][4][11] Previous to this they were common in the developing world but rare in the developed world.[4] The increase in the developed world may have been caused by increased international travel, resistance to insecticides, and the use of new pest-control methods that do not affect bed bugs.[5][12] The fall in bed bug populations after the 1930s in the developed world is believed to be partly due to the usage of DDT to kill cockroaches.[13] The invention of the vacuum cleaner and simplification of furniture design may have also played a role.[13] Others believe it might simply be the cyclical nature of the organism.[14] 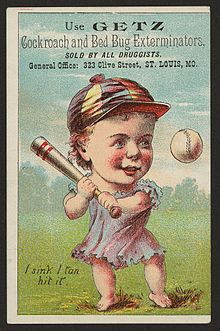 Bed bugs have been known to be human parasite for thousands of years and many different methods have been attempted to deal with them.[3]

In the 18th century, turpentine was used in combination with henna (Lawsonia inermis) flowers and alcohol, as an insecticide that also reputedly killed bed bug eggs.[18]

The use of black pepper to repel bed bugs is attested in George Orwell's 1933 non-fiction book Down and Out in Paris and London.

Dusts have been used to ward off insects from grain storage for centuries, including "plant ash, lime, dolomite, certain types of soil, and diatomaceous earth (DE) or Kieselguhr".[21] Of these, diatomaceous earth in particular has seen a revival as a non-toxic (when in amorphous form) residual pesticide for bed bug abatement. Insects exposed to diatomaceous earth may take several days to die.[21]

Basket-work panels were put around beds and shaken out in the morning, in the UK and in France in the 19th century. Scattering leaves of plants with microscopic hooked hairs around a bed at night, then sweeping them up in the morning and burning them, was a technique reportedly used in Southern Rhodesia and in the Balkans.[22]

The rise in infestations has been hard to track because bed bugs are not an easily identifiable problem. Most of the reports are collected from pest-control companies, local authorities, and hotel chains.[23] Therefore, the problem may be more severe than is currently believed.[24]

Bed bugs are an increasing cause for litigation.[25] Courts have, in some cases, exacted large punitive damage judgments on some hotels.[26][27][28] Many of Manhattan's Upper East Side home owners have been afflicted, but they tend to be silent publicly in order not to ruin their property values and be seen as suffering a blight typically associated with the lower classes.[29]