It has been ranked the dirtiest hotel in America four years running.[5] Numerous reports on TripAdvisor warn of bedbug infestation and unsafe conditions.[6]

Excavation for the new structure began with the removal of six old tenements from the site in May 1929. Tenements were razed between 250 - 263 West 43rd Street along with a two story taxpayer at 241 West 42nd Street.[7] Several floors of steel work were added to the framework by mid-October.[8]

In October 1931 a Federal judge appointed the Irving Trust Company as receiver (legal) in the bankruptcy of the Harper Organization, Inc., and Harris H., and Percy Uris, its officers. The defendant corporation owned the Dixie Hotel.[9] James B. Regan, formerly proprietor of the Knickerbocker Hotel, was another appointed receiver.[10]

The hotel and bus terminal were sold in March 1932, during the Great Depression, to pay a debt of $2,058,540. The property was valued at $2,300,000.[11] In April 1932 the Southworth Management Corporation, headed by Roy S. Hubbell, assumed control of hotel operations. Hubbell formerly managed the Hotel Commodore and the Hotel Belmont in New York City. The Southworth Management Corporation was affiliated with William Ziegler Jr. The company had jurisdiction over the site of the demolished Hotel Belmont at 42nd Street and Park Avenue (Manhattan).[12] Hubbell, whose primary residence was in Pelham, New York, died in October 1932, in his bedroom at the Dixie Hotel. He was 55.[13] 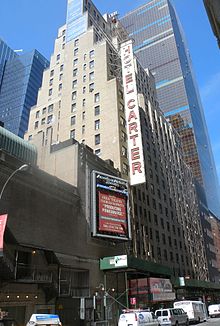 The Carter Hotels Corporation took over management of the hotel in 1942.[14] In 1976 the company allocated $250,000 for renovations and sign alteration in an effort to clean up Times Square.[1] H.B. Carter, president of the company, wanted to change the hotel's name to give one of the establishments in the chain a corporate identity. The firm controlled four other hotels in Buffalo, New York and Boston, Massachusetts.[1]

Vietnamese businessman and former ship owner, Tran Dinh Truong, purchased the hotel in October 1977. The Carter was described as an establishment which caters to middle-class tourists which has suffered with the decline of the surrounding area.[15]

A bus depot in the Dixie Hotel was in use for twenty-seven years before it closed in early July 1957. Opening in February 1930[16] the terminal handled 350 buses daily during peak summer seasons.[17] The Central Union Bus Terminal had the largest enclosed loading space of any bus terminal in New York. It occupied the main floor of the hotel and was managed separately. It had entrances on 42nd Street and 43rd Street. The loading platform and waiting room were situated five feet below street level. Buses entered and departed utilizing separate ramps. A turntable with a diameter of thirty-five feet was employed to direct incoming buses to exits. Bus movements were governed by a dispatcher using an electric signaling device.[16] It was called the Short Line Bus Terminal by July 1931.[18] The terminal closed due to an inability to compete with the Port Authority bus terminal at 8th Avenue (Manhattan) and 40th Street (Manhattan).[17]

Another business which was located in the hotel was Max Bachner's laundry. It was given a lease for operation in August 1929.[19] 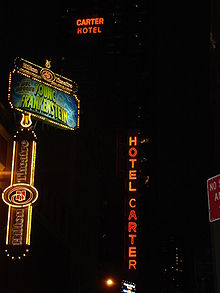 The Hotel Carter is located in Manhattan's theater district.

On Memorial Day, May 30, 1930, the Dixie Hotel displayed the Confederate battle flag. It hung from the south side of 43rd Street near 8th Avenue. One pedestrian mistook the flag for the Union Jack.[20]

Clarence Darrow encouraged representatives of the Associated Motion Picture Advertisers to resist all types of censorship during an April 1931 luncheon at the hotel.[21] The same month Charles H. Vanderhoof, manager of the syndicate department of the New York Times, died at St. Luke's Hospital. His residence was the Dixie Hotel.[22]

George R. Sanders of Brooklyn, New York jumped from the 14th floor of the hotel on March 13, 1931. His body crashed through the roof of a single story restaurant adjacent to the Dixie. He landed at the feet of two customers of the diner and the night manager. He left a note in his room identifying himself and citing mental depression as the reason for killing himself.[23]

Olga Kibrick, daughter of a wealthy Brockton, Massachusetts insurance executive, committed suicide by leaping from the roof of the hotel to a third floor extension on the west side of the building, in October 1931. She had been staying on the 21st floor. Police found a Brockton Musical Chorus card in her room, along with fifteen cents in change, her gloves, and a pocketbook.[24]

The body of James M. Fairbanks, a former office manager of the brokerage firm of Tucker, Anthony, & Co., was discovered by hotel employees on the roof of a three story extension, in April 1932. Fairbanks committed suicide to avoid being sentenced for embezzling $290,000 from his employers. He was staying in Room 2002 the night before he would have been sentenced from five to ten years for the offense.[25]

In September 1941 a young man from Wayne, Nebraska burned to death after falling asleep smoking on the 12th floor of the hotel. The story made headlines when it was discovered that shortly after his arrival he received a letter from his father. Fredereick S. Berry Jr. was warned by his dad of a premonition his mother had of something dire happening to him. Berry was discovered by hotel employees seated in a chair, with the clothing on his upper body burned completely. He died after being taken to Roosevelt Hospital.[26]

In April 1942 the Dixie Hotel experienced an increase in the number of executives and business couples who selected its quarters as permanent residences. Management responded by redecorating and preparing one room units for accommodation as living rooms during the day and bedrooms at night.[14]

Jacobowitz & Katz, investors, purchased the taxpayer which adjoined the hotel in July 1951. Located at 264 West 43rd Street, the building was formerly occupied by Loft's. The deal was brokered by Harry G. Silverstein. The property had a tax value of $35,000.[27]

Sidney Miller, a store clerk at the Dixie Hotel, was arrested for violating a New York state antismut law during a raid on Square Books, at 584 7th Avenue, in April 1966. His accomplice, Edward Mishkin, was previously convicted of publishing obscene material. His conviction was upheld by the United States Supreme Court in March 1966.[28]

The 255 seat Bert Wheeler Theater opened in the hotel, ten steps above its entrance, in October 1966. Autumn's Here, a musical comedy, was its first attraction. The theater was located in the hotel's Plantation Room. It measured 60 feet in length and 45 feet in width. It was formerly used as a nightclub and later as a restaurant. A circular bar, 50 feet in circumference, adjoined the theater, and was located behind glass doors. It was closed during performances, except for during a twenty minute intermission. Food was served in the Terrace Room, the hotel's restaurant.[29] In June 1967 Follies Burlesque '67 reopened at the Bert Wheeler Theater, after opening at Players Theater in Greenwich Village. The cast included Mickey Hargitay and Toni Karrol.[30]

Darrell Bossett, an unemployed laborer, was arrested after scuffling with police in a fourth floor room of the Carter Hotel, in December 1980. He was charged with first degree murder and second degree murder and possession of a weapon, in the shooting of New York City Police Officer Gabriel Vitale.[33]

An infant, twenty-five days old, was beaten to death at the hotel in November 1983. Her father, Jack Joaquin Correa, a hotel resident, was charged with murder and child abuse.[34]

In December 1983 the Carter Hotel was home to 190 families. That month it was cited for its consistently low rate of compliance in correcting health and safety violations.[35] The city sued the hotel in 1983 and 1984 for its failure to correct numerous infractions. In March 1985 Truong was found in contempt of court and ordered to pay a $10,000 fine,.

New York City was using the hotel as a homeless shelter in June 1984. The hotel's 43rd Street entrance became a gathering place for teenagers and young children.[36] By the end of 1985 the Carter had greatly reduced the number of homeless families staying in its rooms. The number of homeless families declined from 300 to 61. The city paid the Carter $62.62 to house a family in a small single room. In one instance the room was musty, with peeling wallpaper, and tattered carpet. The smell in the room was intense. The hotel began to make an effort to attract tourists once again.[37] New York City removed all homeless families from the Carter in 1988 due to difficulties with plumbing, electricity, security, and vermin.[38]

As of July 1990 the Penthouse Hostel operated with a lease on the 23rd and 24th floors of the Hotel Carter. The hostel sign was barely visible beneath the Carter marquee. Lodgings there provided an alternative to the American Youth Hostels organization.[39]

In December 1998 the hotel was temporarily closed because an emergency fire exit was damaged.[40]

On August 31, 2007, a housekeeper found the body[41] of Kristine Yitref, 32, wrapped in plastic garbage bags and hidden under a bed in Room 608. Sex offender Clarence Dean, 35, was charged with homicide.[42] Yitref, as Mistress Kris, was formerly a member of the goth rock group The Nuns.[43] She had turned to prostitution at the time of her death to support a drug addiction.[44]

On July 22, 2009, The Glenn Beck Radio Show, highlighted the reports of the filth and disrepair of the Carter Hotel. Beck covered the reviews that list over 500 extremely bad reviews.

The Bed Bug Registry has listed numerous report over several years citing former visitors' experiences with the hotel: Everything from mice and cockroaches to bed bug attacks.[45]

In 2011, TripAdvisor.com had Hotel Carter listed as no. 4 on their Top 10 of Americas dirtiest hotels, based on reviews and user ratings. [46] The hotel was also mentioned in the USA Today in relation to "winning" the title as the dirtiest hotel in the US in 2009. [47]