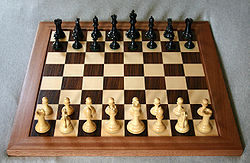 A game of chess, in the starting position.
See also: Glossary of chess and Index of chess articles

The following outline is provided as an overview of and topical guide to chess:

Chess – two-player board game played on a chessboard, a square-checkered board with 64 squares arranged in an eight-by-eight grid. Each player begins the game with sixteen pieces: one king, one queen, two rooks, two knights, two bishops, and eight pawns. The object of the game is to checkmate the opponent's king, whereby the king is under immediate attack (in "check") and there is no way to remove or defend it from attack on the next move.

Chess can be described as all of the following:

Rules of chess – rules governing the play of the game of chess.

How each piece moves

End of the game

Pawn structure – Describes features of the positions of the pawns

Chess tactics – a chess tactic is a sequence of moves which limits the opponent's options and may result in tangible gain. Tactics are usually contrasted with strategy, in which advantages take longer to be realized, and the opponent is less constrained in responding.

Possible responses to an attack

Openings including a trap

Venues (who and where to play)

History of chess, by period

Chess variant – Games similar to chess but with different rules or pieces.

Incomplete information and elements of chance

Chess combined with other sports

This audio file was created from a revision of Outline of chess dated 2006-09-26, and does not reflect subsequent edits to the article. (Audio help)
More spoken articles