The term hexagonal chess designates a group of chess variants played on hexagonal boards. The most popular one is Gliński's hexagonal chess which was invented in 1936 by Władysław Gliński of Poland. 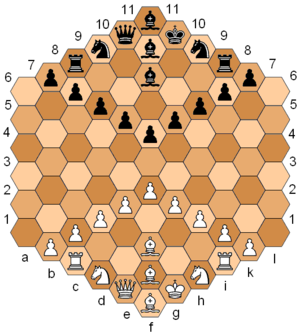 Gliński's hexagonal chess is the most popular hexagonal chess variant. At one point in time, there were more than half-a-million players, and over 130,000 board sets have been sold.[1] The game was very popular in Eastern Europe, especially in Poland, Gliński's native country.

The game is played on a hexagonal board having three colors (light, dark, and medium), with the middle cell (or hex) usually medium.[2] The usual set of chess pieces is increased by one bishop and one pawn. The board has 11 files, marked by letters a –l (letter j is not used), and 11 ranks (which bend 120° at file f). Ranks 1–6 each contain 11 cells, rank 7 (filled with black pawns in the initial setup) has 9 cells, rank 8 has 7, and so on. Rank 11 contains only one cell: f11.

The diagrams below show how the pieces move. As in chess, the knight can jump over other pieces. Three bishops on different colors can never meet. The queen moves as rook plus bishop. There is no castling in Gliński's hexagonal chess.

Pawns move straight forward and capture orthogonally to an adjacent square (shown as red circles on the diagram above); the pawn's capturing move direction does not correspond to the bishop's move, as is the case in square chess. All pawns can make a double step from their starting hexes. If a pawn captures from its starting hex in such a way that it now occupies a starting hex of another pawn, it can still make a double move. For example, if the pawn on e4 would capture a black piece on f5, it still has the option to move to f7. , The Pawn in the middle file (hex f5 for White) cannot make a double step on initial setup as the hex is occupied (a black Pawn is placed on f7), but the double step move could be done later, as long as the hex is empty. En passant captures are also possible: for example, if the black pawn on c7 on the diagram above moves to c5, the white pawn on b5 can capture it: bxc6. Pawns promote on the last hex of a file; the hexes where white pawns promote are marked with stars.

Stalemate is not a draw in this chess variant, but is still counted less than checkmate. In tournament games, the stalemated player (the one who cannot make any legal moves) earns 0.25 points and the player who delivers stalemate 0.75 points.

A numeric (or international) notation exists. Every other detail is exactly as in ICCF numeric notation, except that there is no castling.

1977
Hexagonal Chess was topic for many newspapers and magazines in Poland and other Eastern European countries.

1982
April: Second Hungarian Championship held in Miscolc. Laszlo Rudolf became the Hungarian Champion for 1982. June: Final agreement and arrangements completed with "Bohemia" in West Germany regarding production of a new complete Hexagonal Chess boxed game with roll-up double-sided board (hexagonal/square) and wooden pieces to be distributed in the West European market. July: An open Hexagonal Chess Tournament was held on 10th and llth July in the famous Sokolniki Park in Moscow. Players from Moscow and elsewhere in t in the USSR took part in the competition. First place and the "Moscow Trophy" were taken by F. Goncharov. Second was S. Seryubin and Third V. Goltyapin. Judging from the reports received, this tournament has considerably accelerated the development and popularity of Hex Chess in the USSR. Further tournaments, including international team matches (over-the-board and correspondence) are being organized.

Open International Tournament held in Pecs, Hungary, 24 – 31 July. This tournament was organized by the President of the Hungarian Hexagonal Chess Association, Mihaly Gelencser, and sponsored by the Zsolnay porcelain factory in Pecs, which also donated the "Zsolnay Cup" as well as other prizes of porcelain figures. The winner of the Tournament was Laszlo Rudolf (Hungary). Second place was taken by Simon Triggs (Great Britain). 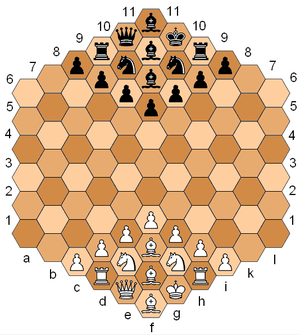 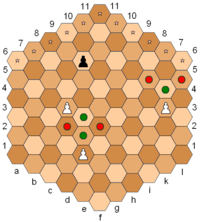 Dave McCooey and Richard Honeycutt developed another variation of hexagonal chess.[3] It is very similar to Glinski's version, but there are four differences: the starting array, the pawn's capturing moves, the Pawns on f-file cannot make a double step, and that stalemate is a draw, each player gets half a point. See the diagram on the left for the pawn's move in McCooey's variant. Note that the capturing move corresponds to the bishop's move. The white pawn on d5 can capture the black pawn on e8 en passant in case the black pawn advances to e6. The pawn on the f-file is not allowed to advance two steps, and is not defended in the opening array, which in fact allows a smothered mate when captured by a knight. But this rarely occurs in practical play.

These endgame studies apply to Glinski's, McCooey's and Mathewson's games:[4] 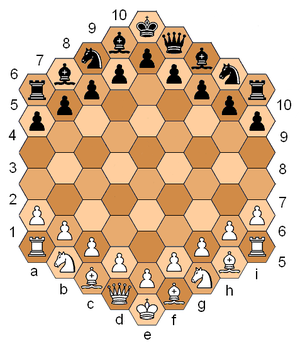 Invented by Soviet geologist Isaak Grigorevich Shafran in 1939 and registered in 1956. It was demonstrated at the Worldwide Chess Exhibition in Leipzig in 1960.

The board is shaped like an irregular hexagon with nine files and ten ranks. There are 70 hexes in the board, as opposed to 91 in Glinski's and McCooey's versions. The files are labelled a to i; the straight lines running from 10 to 4 o'clock are numbered 1 to 10. In the diagram, the two kings start on e1 and e10; Black's rooks start on a6 and i10; White's rooks start on a1 and i5. The hex i1 does not exist. Each player calls the left-hand side of the board his queen's flank and the right-hand side his bishops' flank; note that they do not match (White's queen's flank is Black's bishops').

The pieces and pawns move and capture exactly like McCooey's. However, a pawn's first move can take him to the middle of his file. This means that the a- and i-pawns advance only one step, and the d-, e-, and f-pawns may make a triple move. If they do they are subject to be captured en passant. 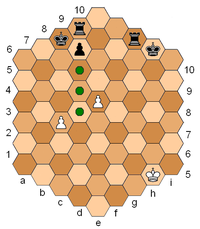 Castling is possible in Shafran's chess. The usual restrictions apply. It can be long or short in either direction. The notation consists of Q- or B- (indicating whether the queen's or the bishops' rook is used) followed by 0-0-0 (long castling: the king moves next to the rook and the rook jumps over him) or 0-0 (short castling, the opposite procedure). In the diagram, the black king on h10 has castled long queenside (1... Q-0-0-0) and the one on c8 has castled short bishopside (1... B-0-0). Castling does not really increase the king's safety or make the rook more active, but it is present in the game nonetheless, for completeness.

Finally, stalemate is a draw.

The first published hexagonal chess variant was the commercial game Hexagonia.[1] It was invented in 1864 by John Jaques & Son. The board had 125 cells; each side had the king, 2 cannons, 4 knights and 8 pawns.

In 1998 Derick Peterson invented the Grand Hexachess. In this variant the board is placed horizontally, placing each player's pieces to opposite sides. Pawns then have two forward possible moves (forward left and forward right) and three diagonal capturing movements possible (one directly in front). Precisely this was the motivation for this design, considering the fact that usually hexagonal chess pawn is the only piece that does not increase their mobility.

Multiplayer chess variants have existed since the beginning of the game, as chaturaji was a four-player version of chaturanga. Multiplayer chess introduces a diplomacy factor, turning the game into a quite a different one from two-player chess.

In 1984, Ronald Planesi invented the ImmortalStarMasters game. It is a chess or checkers variant for two to six players played on a hexagonal board.[6].

The original 1984 name of this game was Kingmaster., however, due to the U.S. Copyright Office's lack of support for title copyright protection, and asserted infringement, the name was changed. The board in this game is significantly larger than in Glinski hexagonal chess in order to accommodate six players and placed in a such a way that each side of a large hexagon may be occupied by one of six players. Pieces are arranged essentially along traditional lines (bishops and knights exchange places to account for the hexagon variation) and one extra bishop is added so all spaces on the board are covered by bishops (a ninth pawn is also added to "seal" the third bishop within the initial structure). All pieces except pawn move in the same way as in Glinski hexagonal chess. The pawn moves and captures similar to McCooey's chess, but within an individual territory a pawn can move in two forward directions and capture in three directions (one directly forward direction and two diagonally-forward directions), due to the particular orientations of a hexagon. In the central area pawns can move and capture in any direction.

Napoleonesque methods of play include two players each using three sets of pieces or three players each using two sets of pieces. The primary structural difference between ImmortalStarMasters and the listed hexagonal variants, other than the critical size of the board, is that the listed variants all allow a bishop to exit the initial structure as its first move without movement by any pawns whatsoever (concurrently meaning that a bishop is unprotected by any pawns and subject to immediate attack without the prior movement of a protecting pawn), which is an extreme violation of basic chess structure logic.

A two-player version uses essentially the same rules and can use the same board, but a smaller board is available and recommended for closer adherence to "number of pieces versus available space" (powers of force) considerations to match the "difficulty of play" as related to standard square-based chess.