This is the article about the town in Caria; for the goddess see Aphrodite

Aphrodisias (Greek: Ἀφροδισιάς, Aphrodisiás) was a small city in Caria, on the southwest coast of Asia Minor. Its site is located near the modern village of Geyre, Turkey, about 230 km from İzmir.

Aphrodisias was named after Aphrodite, the Greek goddess of love, who had here her unique cult image, the Aphrodite of Aphrodisias. According to the Byzantine encyclopedic compilation called the Suda, before being known as Aphrodisias, the city had held three previous names: Lelégōn Pólis (Λελέγων πόλις, "City of the Leleges"),[1] Megálē Pólis (Μεγάλη Πόλις, "Great City"), and Ninóē (Νινόη),[2] The city was renamed Stauroúpolis (Σταυρούπολις, "City of the Cross") in around 640.

The city was built near a marble quarry that was extensively exploited in the Hellenistic and Roman periods, and sculpture in marble from Aphrodisias became famous in the Roman world. Many examples of statuary have been unearthed in Aphrodisias, and some representations of the Aphrodite of Aphrodisias also survive from other parts of the Roman world, as far afield as Pax Julia in Lusitania.[3]

As many pieces of monumental quarried stone were reused in the Late Antique city walls, many inscriptions could and can be easily read without any excavation; the city has therefore been visited and its inscriptions recorded repeatedly in modern times, starting from the early 18th century.

The first formal excavations were undertaken in 1904-5, by a French railroad engineer, Paul Augustin Gaudin. The most recent, ongoing excavations were begun by Kenan Erim under the aegis of New York University in 1962 and are currently led by Professor Christopher Ratté (at NYU) and Professor R.R.R. Smith (at Oxford University). The findings reveal that the lavish building programme in the city's civic center was initiated and largely funded by one Gaius Julius Zoilus, a local who was a slave of Gaius Julius Caesar, set free by Octavian.[4] When Zoilus returned as a freedman to his native city, endowed with prestige and rich rewards for his service, he shrewdly directed it to align with Octavian in his power struggle against Mark Antony. This ensured Octavian Augustus's lasting favor in the form of financial privileges that allowed the city to prosper.

The site is in an earthquake zone and has suffered a great deal of damage at various times, especially in severe temblors of the 4th and 7th centuries. An added complication was that one of the 4th century earthquakes altered the water table, making parts of the town prone to flooding.

Evidence can be seen of emergency plumbing installed to combat this problem. Aphrodisias never fully recovered from the 7th century earthquake, and fell into disrepair. Part of the town was covered by the modern village of Geyre; some of the cottages were removed in the 20th century to reveal the older city. A new Geyre has been built a short distance away. 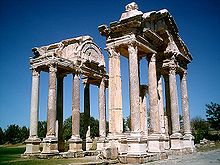 The double tetrapylon, or monumental gate

The Temple of Aphrodite was a focal point of the town, but the character of the building was altered when it became a Christian basilica. The Aphrodisian sculptors became renowned and benefited from a plentiful supply of marble close at hand. The school of sculpture was very productive;[5] much of their work can be seen around the site and in the museum. Many full-length statues were discovered in the region of the agora, and trial and unfinished pieces pointing to a true school are in evidence. Sarcophagi were recovered in various locations, most frequently decorated with designs consisting of garland and columns. Pilasters have been found showing what are described as "peopled scrolls" with figures of people, birds and animals entwined in acanthus leaves.

The cult image that is particular to Aphrodisias, the Aphrodite of Aphrodisias, doubtless was once housed in the Temple of Aphrodite,[6] She was a distinctive local goddess who became, by interpretatio graeca, identified with the Greek Aphrodite. Her canonical image, typical of Anatolian cult images, shows that she is related to the Lady of Ephesus,[7] widely venerated in the Greco-Roman world as Artemis of Ephesus. The surviving images, from contexts where they must have been more civic than ritual, are without exception from the late phase of the cult, in Hellenistic and Roman times. They are rendered in the naturalistic style common to their culture, which gave the local goddess more universal appeal.[8] Like the Lady of Ephesus, the "Aphrodite" of Aphrodisia wears a thick, form-disguising tunic, encasing her as if in a columnar box, always with four registers of standardized imagery. Her feet are of necessity close together, her forearms stretched forward, to receive and to give. She is adorned with necklaces and wears a mural crown[9] together with a diadem and a wreath of myrtle, draped with a long veil that frames her face and extends to the ground. Beneath her overtunic she wears a floor-length chiton. The bands of decoration on the tunic, rendered in bas-relief, evoke the Goddess's cosmic powers: the Charites, the Three Graces that are the closest attendants of Aphrodite; heads of a married pair (the woman is veiled), identified by Lisa Brody as Gaia and Uranos, Earth and the Heavens, over which this goddess reigns, rather than as Zeus and Hera; Helios and Selene separated by a pillar; the marine Aphrodite,[10] riding a sea-goat, and at the base a group of Erotes performing cult rituals.

The Bouleuterion (Council House) is centered on the north side of the North Agora. As it stands today, it consists of a semicircular auditorium fronted by a shallow stage structure about 46 m wide. The lower part of the auditorium survives intact, with nine rows of marble seats divided into five wedges by radial stairways. The seating of the upper part, amounting to an additional twelve rows, has collapsed together with its supporting vaults. The plan is an extremely open one, with numerous entrances at ground level and several stairways giving access to the upper rows of seats. A system of massive parallel buttresses shows that the building was originally vaulted. The auditorium would have been lighted by a series of tall, arched windows in the curved outer wall. Seating capacity can be estimated at about 1750. 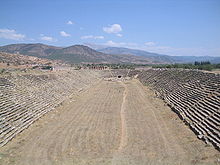 The available evidence indicates a construction date in the Antonine or early Severan period (late 2nd or early 3rd century AD). The scaenae frons (stage front) was certainly put up at this time, as the style of both sculpture and architectural ornament suggest. Statue bases terminating the retaining walls of the auditorium bore the names of two brothers, senators in the early Severan period, and two inscribed bases placed symmetrically against the exterior facade held statues of Aphrodisian benefactors, Claudia Antonia Tatiana and her uncle Lucius Antonius Dometinus, who were active at the end of the 2nd century.[11] Tatiana is known to have had close ties with Ephesus, and it is possible that the striking similarities between this building and the Bouleuterion on the Civic Agora there, dated by inscription to the mid-2nd century, are due to some initiative on her part. We do not know what stood here before the 2nd century AD, but it is likely that the present building replaced a smaller one contemporary with the laying out of the Agora in the late 1st century BC.

The Bouleuterion at Aphrodisias remained in this form until the early 5th century, when a municipal official had it adapted as a palaestra, recording his achievement in an inscription on the upper molding of the pulpitum (stage). Palaestra usually refers to a wrestling ground, but in the 5th century it could be used to describe a hall for lectures, performances, and various kinds of competitive displays, as suggested by a number of factional inscriptions carved on the seats. Numerous additional cuttings in the surviving seats, probably for poles supporting awnings, suggest that by this time the building had lost its roof. The orchestra was lowered and provided with a marble pavement, reused, perhaps, from the earlier phase.[12]

The Sebasteion,[13] or Augusteum, was jointly dedicated, according to a 1st century inscription on its propylon, "To Aphrodite, the Divine Augusti and the People". A relief found in the ruins of the south portico represented a personification of the polis making sacrifice to the cult image of Aphrodite of Aphrodisias, venerated as promētōr, "foremother" or "ancestral mother". "Aphrodite represents the cosmic force that integrates imperial power with the power of local elites," a reader of Chariton romance has noted.[14] This connection between the goddess and the imperial house was also a particularly politic one at the time, as the Gens Julia - the family of Julius Caesar, Octavian Augustus, and their immediate successors - claimed divine descent from Venus/Aphrodite.

Other buildings and discoveries

There are many other notable buildings, including the stadium, which is said to be probably the best preserved of its kind in the Mediterranean except, perhaps, for the Sanctuary of Apollo at Delphi.[citation needed] It measured 262 by 59 m and was used for athletic events until the theatre was badly damaged by a 7th century earthquake, requiring part of the stadium to be converted for events previously staged in the theatre.

A frieze discovered in 1980 showing a bare breasted and helmeted female warrior labelled BRITANNIA writhing in agony under the knee of a Roman soldier with to the left and below the inscription TIBERIUS CLAUDIUS CAESAR is assumed to depict Britain subjugated by Rome.[15]

The quality of the marble in Aphrodisias has also resulted in an unusually large number of inscribed items surviving in the city. Upwards of 2000 inscriptions have been recorded by the New York excavators, many of them re-used in the city walls. Most inscriptions are from the Imperial period, with funerary and honorary texts being particularly well-represented, but there are a handful of texts from all periods from the Hellenistic to Byzantine.

Excavations in Aphrodisias uncovered an important Jewish inscription whose context is unclear. The inscription, in Greek, lists donations made by numerous individuals, of whom several are classed as 'theosebeis', or Godfearers.[16] It seems clear through comparative evidence from the inscriptions in the Sardis synagogue and from the New Testament that such Godfearers were probably interested gentiles who attached themselves to the Jewish community, supporting and perhaps frequenting the synagogue. The geographical spread of the evidence suggests this was a widespread phenomenon in Asia Minor during the Roman period.

In the Late Antique period the city was renamed Stauropolis 'City of the Cross' sometime before 640.[17]

Le Quien (Oriens christianus, I, 899-904) mentions twenty bishops of this see, among whom were:

Another bishop, Theopropios, is mentioned by an inscription (Revue des études grecques, XIX, 298).

In the 7th century Stauropolis had twenty-eight suffragan bishops and twenty-six at the beginning of the 10th century. Between 1356 and 1361 the see must have been abandoned by the metropolitan, but the title was long retained and he was given the revenues of other churches.[18] Isaias of Stauropolis attended the Council of Florence (1439) and fled to avoid signing the decree of union.