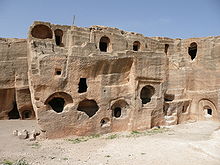 Dara or Daras (Greek: Δάρας) was an important East Roman fortress city in northern Mesopotamia on the border with the Sassanid Empire. Because of its great strategic importance, it featured prominently in the Roman-Persian conflicts of the 6th century, with the famous Battle of Dara taking place before its walls in 530. Today the Turkish village of Oğuz occupies its location.

During the Anastasian War in 502–506, the Roman armies fared badly against the Sassanid Persians. According to the Syriac Chronicle of Zacharias of Mytilene, the Roman generals blamed their difficulties on the lack of a strong base in the area, as opposed to the Persians, who held the great city of Nisibis (which until its cession in 363 had served the same purpose for the Romans).[1]

Therefore, in 505, while the Persian King Kavadh I was distracted in the East, Emperor Anastasius I decided to rebuild the village of Dara, only 18 kilometres westwards from Nisibis and just 5 km from the actual border with Persia, to be "a refuge for the army in which they might rest, and for the preparation of weapons, and to guard the country of the Arabs from the inroads of the Persians and Saracens".[1] Masons and workers from all over Mesopotamia were gathered and worked with great haste. The new city was built on three hills, on the highest of which stood the citadel, and endowed with great storehouses, a public bath, and water cisterns.[1] It took the name Anastasiopolis (Greek: Ἀναστασιούπολις) and became the seat of the Roman dux Mesopotamiae.

According to Procopius, the hasty construction of the original walls resulted in poor quality, and the severe weather conditions of the region exacerbated the problem, ruining some sections. Thus Emperor Justinian I was compelled to undertake extensive repairs to the city, afterwards renaming it Iustiniana Nova.[2] The walls were rebuilt and the inner wall raised by a new storey, doubling its height to about 60 feet (20 m). The towers were strengthened and raised to three stories (ca. 100 feet) high, and a moat dug out and filled with water.[3]

Justinian's engineers also diverted the nearby river Cordes towards the city by digging a canal. The river now flowed through the city, ensuring ample water supply. At the same time, by means of diverting its flow to an underground channel which exited 40 miles (64 km) to the north, the garrison was able to deny water to a besieging enemy, a fact which saved the city on several occasions.[4] To avert the danger of flooding, which had already once wrecked large parts of the city, an elaborate arch dam was built to contain it,[5] one of the earliest known of its kind.[6] In addition, barracks were built for the garrison, and two new churches were constructed, the "Great Church", and one dedicated to St Bartholomew.[7]

The city was later besieged and captured by the Persians in 573-574, but was returned to the Romans by Khosrau II after the Roman-Persian treaty in 590. It was taken again by Khosrau in 604-05 after a nine-month siege, restored again to the Roman Empire by Heraclius, until it was finally captured in 639 by the Arabs. After this the city lost its military significance, declined and was eventually abandoned.