Hazzan
This article is about the Jewish musician. For people named Hazan or Chazan, see Hazan (disambiguation). 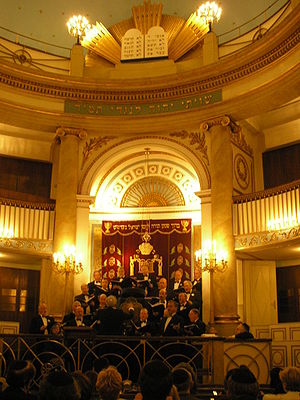 Cantor-concert in the Vienna Stadttempel synagogue

A hazzan or chazzan (Hebrew: חַזָּן‎ ħazzān, Modern Hebrew hazan, Yiddish khazn Ladino hassan) is a Jewish cantor, a musician trained in the vocal arts who helps lead the congregation in songful prayer.[1]

There are many rules relating to how a cantor should lead services, but the idea of a cantor as a paid professional does not exist in classical rabbinic sources. Jewish prayer services are collected in a prayerbook known as the siddur.

The person leading the congregation in public prayers is called the cantor, or sometimes called the sheliach tzibbur (Hebrew for "emissary of the congregation"). Jewish law restricts the role to Jewish males over the age of 13; but today all types of Judaism except for Orthodox Judaism allow women over the age of 12 to have this role as well.[2] See also: Cantor in Reform Judaism.

In theory, any lay person can be a sheliach tzibbur; most synagogue-attending Jews will serve in this role every now and again. In practice, those with the best voice and the most knowledge of the prayers serve much more often.

The office of the hazzan increased in importance with the centuries. As public worship was developed in the Geonic period, and as the knowledge of the Hebrew language declined, singing gradually superseded the didactic and hortatory element in the worship in the synagogue.

Even in the oldest times the chief qualifications demanded of the hazzan, in addition to knowledge of Biblical and liturgical literature as well as the prayer motifs (known as "steiger"), were a pleasant voice and an artistic delivery; for the sake of these, many faults were willingly overlooked. The hazzan was required to possess a pleasing appearance, to be married, and to have a flowing beard. Sometimes, according to Isaac of Vienna (13th century), a young hazzan having only a slight growth of beard was tolerated. Maimonides decided that the hazzan who recited the prayers on an ordinary Sabbath and on week-days need not possess an appearance pleasing to everybody; he might even have a reputation not wholly spotless, provided he was living a life morally free from reproach at the time of his appointment.

But all these moderations of the rule disappeared on holidays; then an especially worthy hazzan was demanded, one whose life was absolutely irreproachable, who was generally popular, and who was endowed with an expressive delivery. Even a person who had once litigated in a non-Jewish court, instead of to a Jewish court, in a disputed question could not act as hazzan on those days, unless he had previously done penance.[3] However many authorities were lenient in this regard and as long as a cantor was "merutzeh l'kehal" desired by the congregation, he was permitted to lead the prayers even on the holiest of days.

In 2009 Tannoz Bahremand Foruzanfar, who was born in Iran, became the first Persian woman to be ordained as a cantor in the United States.[12][13]

As of 2007, the Hebrew Union College-Jewish Institute of Religion, which is the main seminary for Reform Judaism, has ordained 184 women cantors.[14]

The role of hazzanim (Hebrew plural of hazzan) as a respected full-time profession has become a reality in recent centuries. In the last two centuries Jews in a number of European communities, notably Germany and Britain, came to view professionally trained hazzanim as clergy and the hazzan as the deputy rabbi. After the enlightenment, when European nations gave full citizenship and civil rights to Jews, professionally trained hazzanim were accepted by the secular governments as clergy in the same way that rabbis were accepted as clergy.

In an interesting turn of events, the United States government recognized cantors as the first Jewish clergy, even before rabbis were recognized - as a congregation could be organized and led by a committee of Jewish "laymen," who would not have the expertise in liturgy a hazzan would have, newly forming congregations in the late 19th and early 20th centuries sometimes hired a hazzan for a synagogue (and made sure that a kosher butcher was established in the neighborhood) for some time before setting about hiring a rabbi, seeing the hazzan (and the butcher) as a more immediate need. The hazzan therefore solemnized marriages and otherwise represented the congregation in the eyes of civil authorities.

In the United States, many hazzanim supplement their ministry by also earning certification as and working as mohels, for bris ceremonies.

In the USA there are three major organizations for professionally trained hazzanim, one from each of the major Jewish denominations.

Many members of the Cantors Assembly are trained at the H. L. Miller Cantorial School and College of Jewish Music at the Jewish Theological Seminary of America. Many members of the American Conference of Cantors are trained at the School of Sacred Music at Hebrew Union College - Jewish Institute of Religion, School of Sacred Music (New York) Reform. Both of these programs offer a five year training program. Full cantorial training is also offered by the pluralistic seminary The Academy for Jewish Religion, with campuses in New York and Los Angeles, and through ALEPH, the movement for Jewish Renewal.

Members of the Cantorial Council can train at the Philip and Sarah Belz School of Jewish Music at Yeshiva University in New York City.

The curriculum for students in these programs generally include, but are not limited to: