Farndon is a village and civil parish in the unitary authority of Cheshire West and Chester and the ceremonial county of Cheshire, England. It is located on the banks of the River Dee, south of Chester, and close to the border with Wales. At the 2001 Census, the village had a population of 1,517.[1]

It is reported that Edward the Elder died in the ancient parish of Farndon in AD 924, shortly after quelling a revolt of an alliance of Mercians and Welshmen. This involved Edward successfully taking Chester from the occupying Mercians and Welshmen, and then re-garrisoning it, and this happened shortly before his death.[2] Up to the 14th century, Farndon also included the chapelry of Holt in Denbighshire, Wales.

Some historians believe that Farndon was the location of the first ever competitive horse race with riders, in a local field on the banks of the River Dee. Nearby Chester Racecourse is said to be the oldest racecourse in Britain.

During the English Civil War, Farndon was the scene of bitter fighting over the Bridge that was controlling access to Chester from Wales. There is also a fine memorial window in the parish church to the Civil War Royalists.

The village was at one time renowned for its strawberries, which were grown in the surrounding fields. This is no longer the case. The nearest fields are now in Holt.

Farndon is very close to the border between England and Wales (the actual border is on the bridge which crosses the river Dee and which separates Farndon and the village of Holt.) Consequently, Farndon has a Welsh name: Rhedynfre. The village was an important place historically and has been a site of conflict and cultural exchange since the Angles settled the area in the 8th century. The border moved numerous times during the following centuries, placing Farndon alternately in Wales and England. 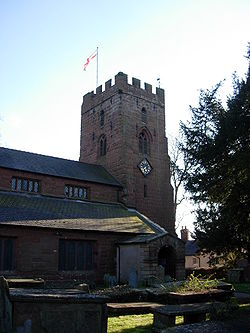 Farndon Bridge spans the Dee connecting Farndon to the nearby Welsh village of Holt on higher ground. The bridge, made of sandstone and originally of Medieval construction, is said to be haunted. Holt Castle is located on the opposite side of the river; it was constructed in the 13th and 14th centuries. The castle fell to the forces of Oliver Cromwell in 1647.

Next to Farndon Bridge is a small picnic area beside the river. At the entrance to the picnic area are Farndon Cliffs. This area has been classed as a Site of Special Scientific Interest (SSSI). The sandstone cliffs contain interesting rock formations.[3]

St Chad's is the old parish church in Farndon. It is thought that some portions of the church date back to Sir Patrick de Bartun, a knight of King Edward III, whose effigy lies in the nave. The Church was damaged during the English Civil War and later repaired. The church contains a unique Civil War Memorial Window, and features an image thought to be that of William Lawes, the famous court musician, who was slain at the battle of Rowton Heath. The church tower still shows signs of Civil War musket ball damage.[4]

The restaurant called 'The Brasserie' closed late 2008. Since that time, the premises have reopened under the name of Little Churtons. This is managed by Mr James Churton who used to manage Churtons Wine Bar in Tarporley.