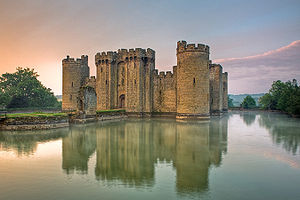 The Latin cross plan, common in medieval ecclesiastical architecture, takes the Roman basilica as its primary model with subsequent developments. It consists of a nave, transepts, and the altar stands at the east end (see Cathedral diagram). Also, cathedrals influenced or commissioned by Justinian employed the Byzantine style of domes and a Greek cross (resembling a plus sign), with the altar located in the sanctuary on the east side of the church.

Surviving examples of medieval secular architecture mainly served for defense. Castles and fortified walls provide the most notable remaining non-religious examples of medieval architecture. Windows gained a cross-shape for more than decorative purposes: they provided a perfect fit for a crossbowman to safely shoot at invaders from inside. Crenellated walls (battlements) provided shelters for archers on the roofs to hide behind when not shooting invaders.

Donington le Heath Manor House Museum, Leicestershire is a surviving example of a Medieval Manor House dating back to 1280. It is now open to the public as a museum. 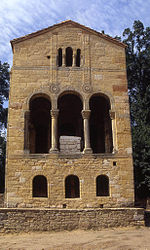 Western European architecture in the Early Middle Ages may be divided into Early Christian and Pre-Romanesque, including Merovingian, Carolingian, Ottonian, and Asturian. While these terms are problematic, they nonetheless serve adequately as entries into the era. Considerations that enter into histories of each period include Trachtenberg's "historicising" and "modernising" elements, Italian versus northern, Spanish, and Byzantine elements, and especially the religious and political maneuverings between kings, popes, and various ecclesiastic officials.

Romanesque, prevalent in medieval Europe during the 11th and 12th centuries, was the first pan-European style since Roman Imperial Architecture and examples are found in every part of the continent. The term was not contemporary with the art it describes, but rather, is an invention of modern scholarship based on its similarity to Roman Architecture in forms and materials. Romanesque is characterized by a use of round or slightly pointed arches, barrel vaults, and cruciform piers supporting vaults.

The various elements of Gothic architecture emerged in a number of 11th and 12th century building projects, particularly in the Île de France area, but were first combined to form what we would now recognise as a distinctively Gothic style at the 12th century abbey church of Saint-Denis in Saint-Denis, near Paris. Verticality is emphasized in Gothic architecture, which features almost skeletal stone structures with great expanses of glass, pared-down wall surfaces supported by external flying buttresses, pointed arches using the ogive shape, ribbed stone vaults, clustered columns, pinnacles and sharply pointed spires. Windows contain beautiful stained glass, showing stories from the Bible and from lives of saints. Such advances in design allowed cathedrals to rise taller than ever, and it became something of an inter-regional contest to build a church as high as possible. Variations included Brick Gothic 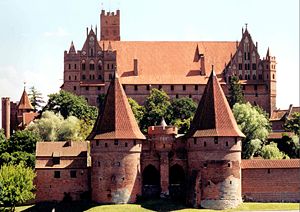