Jettying
This article is about the building technique. For structures, see jetty. 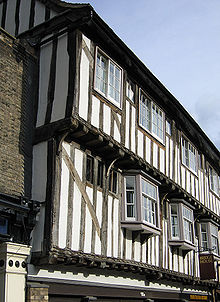 A double jettied timber framed building. The ends of the cantilevered beams supporting the upper floors can easily be seen.

Jettying is a building technique used in medieval timber frame buildings in which an upper floor projects beyond the dimensions of the floor below. This has the advantage of increasing the available space in the building without obstructing the street. Jettied floors are also termed jetties.[1][2]

A jetty is an upper floor that depends on a cantilever system in which a horizontal beam, the jetty bressummer, supports the wall above and projects forward beyond the floor below (a technique also called oversailing). The bressummer (or breastsummer) itself rests on the ends of a row of jetty beams or joists which are supported by jetty plates. Jetty joists in their turn were slotted sideways into the diagonal dragon beams at angle of 45° by means of mortise and tenon joints.

The vertical elements of jetties can be summarized as:

The horizontal elements of jetties are: