Michelstadt is the biggest town in the Odenwaldkreis and borders on the district seat of Erbach.

Michelstadt had its first documentary mention in 741 from Mayor of the Palace Carloman, Charlemagne’s uncle.

Michelstadt is one of the oldest settlements in the inner Odenwald. Its castle grew out of a Frankish baronial estate. This was built into a refuge for the local inhabitants. As a royal estate, Prince Carloman donated it in 741 to Saint Boniface’s pupil Burchard, the first Bishop of Würzburg. This donation was surely meant for Bishop Burchard personally, for the Michelnstat area passed back to the Frankish Crown upon Burchard’s death in 791. 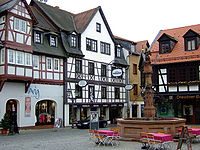 Timber-frame house at the marketplace with the market well

In 815, the Michlinstat area was donated once again. In recognition of his great merit as confidant at Charlemagne’s court, Einhard acquired the main town and all land within two leagues (roughly 15 km) from Charlemagne’s son, Louis the Pious, as a freehold. Einhard was also the one who built the Einhardsbasilika. In 819, he bequeathed his Odenwald holdings to Lorsch Abbey and in so doing also precisely defined the boundaries of the Mark Michelstadt. Upon Einhard’s death on 14 March 840, the monastery came into its inheritance. 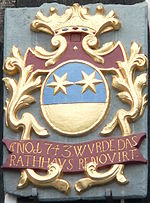 In the 17th century, the first houses outside the town wall were built. In 1773, a new town gate was built, called the Neutor (“New Gate”). In the 19th century, the gate towers were all torn down one after the other.

In 1806, Michelstadt, along with the County of Erbach, passed to the Grand Duchy of Hesse.

The building of the railway line and its completion through to Darmstadt in 1870 and then Eberbach in 1881 brought Michelstadt a sharp economic upswing. Out of what was once a little town of gentlemen farmers with all its craftsmen and tradesmen grew a sizeable community with important industrial operations on the foundation of the centuries-old ironworking. A new economic era began. From the clothweavers’ and dyers’ guild grew a cloth factory; from foundries grew machine factories. Ivory carving was a starting point for businesses in the souvenir industry and plastics processing.

In 2007, a decision to merge the town with the neighbouring town of Erbach was thwarted by a civic vote.[2]

The municipal election held on 26 March 2006 yielded the following results:

The town’s arms might be described thus: Per fess azure two mullets Or and Or diapered.

Michelstadt was granted these arms in 1541 along with its new seal by Count Georg of Erbach. The diapering in the lower half of the escutcheon is unhistoric, and only appeared in the 17th century. Indeed, the escutcheon on the Town Hall, pictured in this article, does not show it. The mullets (six-pointed star shapes) come from the Counts' arms, but why the parting per fess (horizontal division across the middle) was chosen is a mystery. Except for the diapering, the arms have not changed since the 16th century.[3]

Michelstadt has a picturesque Old Town with many timber-frame houses. Particularly worthy of mention are the following buildings, some within the old town, others in the outlying woods: The Historic Town Hall, the Diebsturm (“Thief’s Tower”) at the town wall, the Kellereihof (a Frankish, early mediaeval castle complex refurbished in an early Renaissance style) in the Michelstadt town wall ring, the Late Gothic town church (late 13th century), the Einhards-Basilika, the palace of the Counts at Erbach-Fürstenau (Schloss Fürstenau, within which are parts of an old moated castle in Michelstadt-Steinbach), the Eulbach hunting palace with an “English” park, the Roman bath and castra as part of the Neckar-Odenwald-Limes. 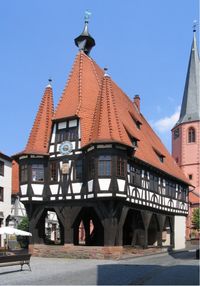 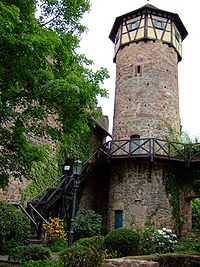 Diebsturm at the town wall

Michelstadt’s timber-frame town hall, which has been immortalized on a Deutsche Post stamp and is known throughout the world, was built in 1484 in the Late Gothic style and later remodelled inside many times; from 1743 to 1903 it was covered in shakes. The town hall’s main floor served from the beginning as a market hall, and was built using jettying. The back (east) wall was originally part of the graveyard wall, upon which the ground floor’s upper bressumer was laid. To this day it is unknown who the master builder was, although it is assumed that the driving force behind the project could have been Schenk Adolar von Erbach and Bishop Johann von Dalberg (his adviser).

The town church, completed in 1490, was built to replace a Carolingian stone church by Einhard, itself built on the site of a former wooden church. The nave’s columns and the two aisles’ walls were built in 1475. The quire comes from 1461; the antechoir’s north wall is even older – Carolingian. Until the 1970s, the church housed one of the most valuable libraries in Germany in its belltower containing more than a thousand volumes that belonged to Michelstadt-born Nicolaus Matz, who was capitular in Speyer, and who bequeathed this collection to his hometown and its citizens in the late 14th century. Since then the library has been housed in a storehouse specially converted for it at the Michelstadt coaching inn that belonged to the Thurn und Taxis noble family, who played a key rôle in European postal services in the 16th century. The former church on this spot was built over a brook that comes up here, called the Kiliansfloß, an early Celtic-Germanic worship site and later a Roman Mithraic worship site. The thus channelled Kiliansfloß fed not only the baptismal font, but also all the town’s fountains. The Kiliansfloß, however, does not actually rise here, but rather far outside the town, but it then disappears into the ground not far from the graveyard, springing up again in the middle of town.

Einhard’s Basilica in the outlying centre of Steinbach

The Einhards-Basilika was built by Einhard, Charlemagne’s chronicler and confidant. The Carolingian church built between 824 and 827 is one of the very few Carolingian buildings that have largely survived. The Basilica’s crypt once housed Saints Peter’s and Marcellinus’s relics, which had been stolen from Rome on Einhard’s instructions by his notary Ratleik. His servants’ nightmares and the remains’ “sweating blood” there, however, made Einhard think that this arrangement did not feel right. He thus transferred himself, his wife, the relics and his seat to Ober-Mulinheim am Main, now known as Seligenstadt, which thereby became a pilgrimage site with a new, bigger basilica.

The story that has been handed down says that the relics hidden from Rome were transported to Saint-Maurice-en-Valais, now in Switzerland, whence they were then brought to Michelstadt by a cheering pilgrimage procession.

The Basilica in Steinbach was converted, expanded, and rededicated many times and later served first as a hospital and then in the 17th century as a barn. Once it was rediscovered in 1873 as being Carolingian, the exploration and safeguarding of the parts of the basilica that were still intact began.

The Einhards-Basilika was until 1967 owned by the princely Counts of Erbach-Fürstenau. The grounds are now owned by the state of Hesse. 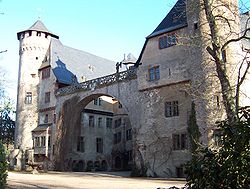 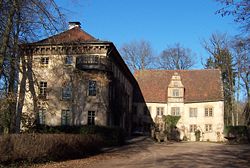 The whole palace complex is a series of building styles well worth seeing, from remains of the old Electorate of Mainz border fortifications and moated castle (about 1300) on the north side to the Gothic works by the stonecutters who came from Strasbourg to Steinbach, to the gigantic Renaissance-style gateway arch (1588) between the moated castle’s two western corner towers which replaced the castle wall and opened the gloomy, dank courtyard back up to the former castle garden, to the Renaissance palace mill, a former mint (today a run-of-the-river hydroelectric station), to the dainty Baroque Kavaliershaus (a palace outbuilding for staff and guests) on the Mümling, to the Classicist residential wing, the Neues Palais (1810/11) and the Late Baroque orangery in the palace park, which was done in the English style. The orangery’s upper floor housed the small palace theatre.

Schloss Fürstenau is still a dwelling, with the head of the house of the princely Counts of Erbach-Fürstenau and his family still living there. The former Electorate of Mainz defence facility lay on the property of the Schenk of Erbach (a forefather of the noble family, which at that time had not yet branched) and passed into his ownership in 1355. Viewing the palace from the outside can be done by day. At the stylish outer bailey with its gateway arch from 1765 some prominent visual artists have taken up residence (in among other places the former stables from after 1765).

Right near Würzberg, in the middle of a clearing are found the remains of the Roman Castrum of Würzberg, which was built about AD 100 as part of the Neckar-Odenwald-Limes, and was used for about 60 years before the border was shifted farther east. The castrum can only be made out by an earthen wall. The Roman bathhouse, on the other hand, which stands right next to the castrum, has been partially restored; the floors have been replaced and the wall has been built back up to a height of about a metre. Despite the bath’s small size, which was only meant for the fort’s 120-man garrison, the design of a Roman bathhouse is easily recognizable.

Not far from the outlying centre of Vielbrunn, in the area around the former hunting palace of the Princes of Löwenstein-Wertheim-Rosenberg, traces of the Castrum of Hainhaus can still be found. Furthermore, on Michelstadt’s eastern outskirts can be found the Castrum of Eulbach near the Eulbacher Park, a landscaped English park from the early 19th century with its like-named hunting palace and an adjoining wildlife park.

In Michelstadt the two Bundesstraßen 45 and 47 cross, both old trade roads from Frankfurt am Main to Augsburg and from Worms to Würzburg respectively.

The town has at its disposal a railway station on the Odenwaldbahn (railway; RMV Line 65; Eberbach – Erbach – Darmstadt – Frankfurt / Hanau). Regionalbahn, Stadtexpress and Regionalexpress trains of the VIAS GmbH stop here.

Moreover, Michelstadt has at its disposal the special landing facility Flugplatz Michelstadt (airfield), which lies roughly 2 km from the town and is run by a club.