The Church of Jesus Christ of Latter-day Saints in Michigan

The Church of Jesus Christ of Latter-day Saints in Michigan 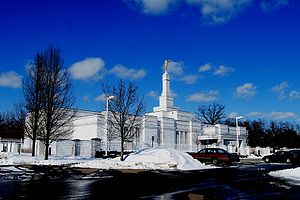 Members of The Church of Jesus Christ of Latter-day Saints arrived in Michigan in the 1830s. It did not have an organized presence in the state from the late 1850s into the 1870s. However missionary work was reopened by Cyrus Wheelock and has progressed steadily since then.

Today there are over 40,000 church members in the state, and a temple that was dedicated in 1999.

The Church of Jesus Christ of Latter-day Saints in Michigan began with the Mack family. Almira Mack Scobey had gone to Kirtland, Ohio to visit her cousin Joseph Smith and there they joined the church.

On June 7, 1831 Doctrine and Covenants Section 52 was received which among other things commanded another one of Mack Scobey's cousins Hyrum Smith and also John Murdock to go to Detroit and preach the gospel on the way to Jackson County, Missouri. These two brethren went to Michigan in company with Mack Scobey and Hyrum's (and Joseph's) mother, Lucy Mack Smith. They were also accompanied by Lyman Wight and John Corrill. The missionaries eventually went to Pontiac where they had much success, baptizing several people, including David Dort, the husband of one of the Mack sisters.

In 1833 Joseph Wood and Jared Carter were sent as missionaries to Michigan. Besides Pontiac they also preached in Rochester and Auburn. Another notable early convert was Samuel Bent who was a deacon in the Congregational Church in Pontiac.

In 1834 Joseph Smith went to Pontiac and preached in the area. Among those who accompanied him on this trip besides his brother Hyrum were Oliver Cowdery, David Whitmer, Martin Harris, Frederick G. Williams and Robert Orton.[2]

In 1839 on their way to serve as missionaries in the British Isles Parley P. Pratt and his brother Orson Pratt stopped in Detroit and stayed with their parents and their brother Anson and his family. While in Detroit they preached several sermons and published a few tracts. One of these was History of the Late Persecution by the State of Missouri Upon the Mormons.

Mephibosheth Serrine was among the missionaries serving at that time, and engaged in debates with representatives of other faiths in such locations at Royal Oak.

After the death of Joseph Smith most members either moved to Nauvoo and then to Utah or joined break away groups such as the one led by James Strang.

In May 1876 William Palmer began preaching the Mormon gospel in Michigan. He had been called as a missionary by Brigham Young. Palmer focused on Mecosta, Isabella and Montcalm counties.[6]

In 1877 Cyrus Wheelock was sent to Michigan as the mission president. Several missionaries came with him. Among these was John Hafen a Swiss immigrant who mainly taught German immigrants and Niels Hendrickson who taught Swedish immigrants.[7]

In 1884 the church received a welcome increase in the number of members in Michigan, but since they were being held in Detroit on polygamy charges at the Federal Prison it did not really help the church. Among these were such early church leaders as David K. Udall and Ammon M. Tenney.

Establishment of the church

By 1887 Michigan was part of the Indiana Conference.[9]

In 1890 Michigan was not officially included in any of the three conferences of the Northern States Mission.[10]

The church dedicated a chapel in Detroit in 1928. That was the only building the church owned in the state. There were also Flint, Grand Rapids, Jackson, Saginaw and Lansing and Saginaw.[11]

About 1940 the church organized the East Michigan District with a district council to prepare for the shift to being a stake. The District president, Jonathan Snow, had primarily grown up in Michigan because the church had sent his father to work in the salt mines in Detroit when Jonathan was a very young child. The first stake in Detroit was formed in 1952 with George Romney as president. A second stake was formed in Lansing in 1960.

In the 1970s the Detroit Stake, now renamed the Bloomfield Hills Michigan Stake, had John R. Pfiefer as president. Under his presidency the calling of Elders Quorum Presidents was made as deliberative a process as the calling of bishops.[12]

The 1967 Detroit race riot fueled a continuing exodus of white Americans from Detroit. Coupled with this the building of I-96 lead to the destruction of the only chapel the church owned inside the boundaries of the city of Detroit.

Nowhere was this shown more clearly than when the Michigan Lansing mission was split in 1978. The new mission was named the Michigan Dearborn Mission, after Dearborn, Michigan. However Michael J. Lantz, a convert to the LDS Church who had joined while serving in the US military in Vietnam during the Vietnam War[13] was the bishop of the Royal Oak Ward by the mid-1980s. His ward was at that point one of four in the Bloomfield Hills Stake that included parts of Detroit. Partly at his urging a new effort was made to send missionaries into the city of Detroit. W. E. Barry Mayo, the president of the Bloomfield Hills Michigan stake who was an immigrant from Canada and had previously served as the first president of the church's branch in Windsor, Ontario before he had moved north of the border, also was involved with these efforts. Starting in 1987 missionaries were assigned to work inside Detroit.

By 1989 a branch had been organized in Detroit. In 1991 it was formed into a ward. The ward met in a former Greek Orthodox building just north of Highland Park, Michigan and just south of Palmer Park. Its first bishop was James Edwards who thus also became the first African American to serve as a bishop in Michigan in the church.

In 1995 the Detroit ward was split into several branches. There were also two other branches formed in the parts of Detroit in the Westland Stake. One of these branches, the New Center Branch, named after Detroit's historic New Center was presided over by Jim Viland, a European American whose wife was African American. The branches would generally meet in rented locations, often with bars over the windows.[14] In 1997 the Detroit based branches in the Westland and Bloomfield Hills stakes were made into a district. In 2000 Lamenais "Monte" Louis, an immigrant from Haiti who had lived for many years in Detroit, became the president of the Detroit district. The year before his son Gregory had been the first person endowed in the Detroit Michigan Temple before he went on his mission to the California Arcadia Mission.

The Detroit Michigan Temple was dedicated in 2000 by Gordon B. Hinckley. Hinckley's son, Clark Hinckley, had lived for several years in Michigan.

In 2005 the Detroit District was realigned with the Bloomfield Hills and Westland Stake. This allowed for more progress, such as the 2008 realignment of the ward and branch boundaries between Detroit, Warren, Eastpointe, Harper Woods and Roseville which allowed for a ward that was almost half in Detroit for the first time since the Detroit Ward had been split apart. A chapel for the Belle Isle Branch which covered much of Detroit east of I-75 and south of I-94 as well as the Grosse Pointes was dedicated in June 2008. The dedication was performed by the Bloomfield Hills Stake president, the above mention Michael Lantz. This was the first chapel the church had built in the city of Detroit since the construction of I-96 had knocked down the last chapel. Also in June 2008 a chapel was built for the Detroit River branch, which covered most of Detroit south of I-94 and west of I-75, was dedicated. This branch not only has several African American members but also many Latino members.

Michigan is currently part of 10 stakes and 1 district. 8 stakes and 1 district are entirely within the state. 2 stakes, with stake centers outside the state, have wards or branches in Michigan. Since The Church of Jesus Christ of Latter-day Saints have no paid clergy, stake presidents, bishops, etc. have their own occupation.

On October 23, 1999 the Detroit Michigan Temple was dedicated by President Gordon B. Hinckley.