The School began to undergo a major transition beginning in the 1990s. Some highlights from that recent history:

Robert J. Dolan, who was named dean in 2001, oversaw a dramatic re-building and facilities modernization initiative and worked to build the School's identity and reputation in the management education marketplace. Under Dolan, the School received one of the two-largest donations ever made to a business school. In the Master of Business Administration (MBA) program, Dolan pressed the School's distinction for turning out leaders with a practical, can-do orientation. This leveraged and accelerated a re-definition of the School's curriculum and image made by his predecessor, B. Joseph White. Dolan also made profound changes to the School's image through his ambitious rebuilding of the dated facilities he inherited, creating a showcase property, the Stephen M. Ross School of Business designed by Kohn Pedersen Fox. On Dolan's watch, the school earned the #1 ranking in the Wall Street Journal's 2006 and 2004 list of MBA programs (which are based on feedback from employers on which MBA program's students they would be most likely to rehire), #8 in The Economist, #5 in the BusinessWeek, and #11 in the U.S. News & World Report rankings in 2006 (the latter three publications' rankings are based on a variety of criteria including reputation among academics, etc.). The school's BBA program is widely regarded as one of the best in the United States, having ranked within the top three of U.S. News & World Report rankings every year since the ranking's inception. In 2005, the school introduced a 3-year version of the previously 2-year undergraduate program; the latter has since been phased out and candidates now apply as seniors in high school or during their freshman year at university, then commence their business studies in the sophomore year of college.

On February 14, 2011, it was announced that Alison Davis-Blake would become the new Dean of the Ross School of Business, succeeding Robert J. Dolan.

Dolan's predecessor, White, became dean in 1990, and began a transformation of the School's character and image. He led a major MBA curriculum overhaul, which aimed to intensify the development of students' professional and practical skills, teamwork, leadership, and overall ability to turn knowledge and ideas into action. The signature innovation, called MAP (Multidisciplinary Action Project), puts students into "live cases" inside companies for seven weeks. MAP's "action learning" or "experiential learning" approach was the first curriculum innovation in management education since the introduction of the case method in the 1940s. It is still a hallmark of Michigan's MBA program. [2] Other initiatives, such as research on how to supplement the GMAT with a test of "practical intelligence," helped cement the school's reputation for innovations that produce business leaders who are not only smart, but highly effective. [3]. White's approach built on a historical strength of the School, which was known for producing hard-working, practically-oriented graduates. In addition, White added a focus on corporate citizenship to the MBAs' training, and moved aggressively to globalize the School. Most notably, he founded the William Davidson Institute to position Michigan as a leader on economies transitioning from communism to free markets.

Following White's changes, Michigan was ranked "most innovative" in Business Week's surveys of corporate executives and was recognized for turning out can-do graduates. In 1996, Michigan was ranked second in Business Week's prestigious business school rankings, the highest ranking the School has achieved, which the magazine attributed to the School's growing reputation for innovation [4]. As a corporate hunting ground, Michigan attracted a broader set of recruiters beyond the auto manufacturers and packaged goods companies who had been its core customers.

Under White, several of the School's hallmark programs and centers were created, including The Erb Institute for Sustainable Global Enterprise, The Joel D. Tauber Institute for Global Operations, The Zell-Lurie Institute for Entrepreneurship, the Wolverine Venture Fund, and the William Davidson Institute.

During the Dolan administration, the school transformed itself further. In 2004, it was named for alumnus Stephen M. Ross who donated $100 million to the school. At the time of the donation, this was the largest gift ever to an U.S. business school, and the largest ever to the University of Michigan. The Ross gift funded a campus overhaul. The school demolished 180,000 square feet (16,000 m²) of existing building space, and has renovated or added 270,000 square feet (25,000 m²).[5] 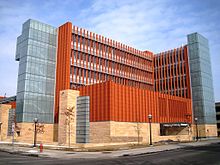 Much of the business school is located on the University of Michigan's Central Campus adjacent to the School of Education and Law School. Its buildings are connected with each other, in some cases through skyways. With a major campus overhaul underway, the Executive Education programs are located at the Michigan Information Technology Center (MITC) near the university's Wolverine Tower office building in southern Ann Arbor.

New York City real estate developer Stephen M. Ross (BBA '62) gave a gift of $100 million to the business school, the second largest donation ever to a U.S. business school (after David Booth's $300 million donation to the University of Chicago Booth School of Business) and the largest gift to the University in its 187-year history. In recognition, the Board of Regents met in special session on September 9, 2004, to rename the school the Stephen M. Ross School of Business.

The Kresge Library's collection includes about 145,000 volumes and 3000 journals as well as microfilms, working papers, and company files. The school's John R. and Georgene M. Tozzi Electronic Business and Finance Center has a trading floor classroom that is linked to the New York Stock Exchange.

The William Davidson Institute (WDI) is a not-for-profit, independent, research and educational institute dedicated to creating, aggregating, and disseminating intellectual capital on business and policy issues in emerging markets. It provides a forum for business leaders and public policy makers to discuss issues affecting the environment in which these companies operate.

WDI was created in 1992 when Guardian Industries Corp. made a 20-year financial commitment to establish an institute at the University of Michigan Business School and was named in honor of Guardian Industries' chairman, president and CEO William Davidson.

WDI supports international activity at the University of Michigan by funding research, hosting visiting scholars, organizing seminars and speaker series, and sponsoring summer internships. In the past thirteen years, more than 1,800 MBA students have participated in more than 450 international projects. WDI is the only institution of higher learning in the United States that is fully dedicated to understanding and promoting actionable business and public policy approaches to addressing the challenges and opportunities in emerging market economies

Created in 1996 by a donation from Frederick A. Erb (BBA ’47) and his wife, Barbara, the Erb Institute for Global Sustainable Enterprise is a partnership between the Stephen M. Ross School of Business and the School of Natural Resources and Environment (SNRE) to support professional education, public outreach and scientific scholarship supportive of the transition to sustainability. The core educational activity of the Institute is the MBA/MS Program, wherein students earn a Master of Business Administration from the Ross School and a Master of Science from SNRE. As of Fall 2011, Ross (Erb Institute) is the only MBA program to be listed in the top 10 of the Aspen Institute's "Beyond Grey Pinstripes" bi-annual survey of top sustainability MBA programs every year since its inception in 2001.

The Frankel Commercialization Fund (FCF) is a "pre-seed" investment fund made possible by Stanley Frankel.

The goals of the FCF are to:

In 2005, alumnus Thomas C. Jones donated $10 million to help undergraduates to experience programs usually provided only to MBA students. The gift established the Thomas C. Jones Center for BBA Education, which aims to help students apply classroom theory, incorporate liberal arts, and teach leadership. The Jones gift is said to be the largest gift to an undergraduate business program.

Joel D. Tauber donated $5 million in 1995 to establish the Joel D. Tauber Manufacturing Institute, which trains graduate students in engineering and business management. The program is run jointly with the University's College of Engineering, through the department of Industrial and Operations Engineering (IOE). In 2007, the Institute was renamed.

The Wolverine Venture Fund (WVF) is a multi-million dollar venture capital fund operated directly out of the Ross School of Business at the University of Michigan. The fund was started in 1997 by Karen Bantel.[6] The Fund invests with the active involvement of MBA students, faculty assistance, and an advisory board composed of professional venture capitalists and entrepreneurs.[7] The WVF invests primarily in early-stage, emerging growth companies [5]. The Fund typically provides $50,000 to $200,000 in seed and first-stage funding rounds[8] in syndication with other venture capital funds and angel investors.

The WVF is the largest, most active University-based venture fund of its type in the country.[citation needed]

The University of Michigan Social Venture Fund (SvF) is the first student-run Social venture fund in the United States.[10] Established in 2009 by four Ross School of Business MBA students, the Social Venture Fund invests in innovative and mission-driven social enterprises.[11][12] The Fund's mission statement reads, "We are committed to providing strategic and patient capital to early-stage social enterprises led by outstanding entrepreneurs that contribute to the proliferation of the new generation of socially-minded business leaders."[13][14]

Students publish their own newspaper called the Monroe Street Journal, named after the main street leading to the school entrance. The school is also home to The Michigan Journal of Business, the first undergraduate-level academic journal in the field of business.

As of 2010, 46 faculty members hold endowed chairs in their respective disciplines.

Publications such as U.S. News & World Report, BusinessWeek, The Wall Street Journal, and the Financial Times have consistently ranked both the school's undergraduate and professional programs highly, often as one of the top five in the U.S. In the year 2006 The Wall Street Journal ranked the MBA program #1 overall; in 2008 BusinessWeek ranked the MBA program #5 overall, while U.S. News & World Report ranked its undergraduate program #3 overall. In 2010, for the third consecutive year U.S. News and World Report rankings of the best U.S. undergraduate business programs ranks Ross at No. 1 in the management category. Also in 2010, the BBA program ranked in the Top Five in the following business specialties: marketing (No. 2), finance (No. 3), international business (No. 4), productions/operations management (No. 4), and accounting (No. 5). In the 2010 QS Global 200 Business Schools Report[22] Ross School was placed as the 9th best Business School in North America.

The Ross School of Business was ranked #3 worldwide in 2011 for research output.[23]