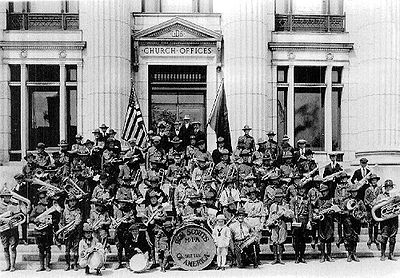 Mutual Improvement Association Scouts in front of the Church Administration Building, c. 1917. With the organization of the Boy Scouts of America in 1910, the LDS Church organized the MIA Scouts a year later, and became one of the first sponsoring organization of the BSA in 1913.

The first official youth association of the church—the Young Gentlemen’s and Young Ladies’ Relief Society—was organized by church founder Joseph Smith in February 1843. In 1854, Apostle Lorenzo Snow organized the Polysophical Society and encouraged young Latter-day Saints to join. In 1875, Church President Brigham Young organized the Young Men’s Mutual Improvement Association (YMMIA) and intended that it act as a male equivalent of the Young Ladies' Cooperative Retrenchment Association, which was renamed the Young Ladies' National Mutual Improvement Association in 1877. The purpose was to "help young men develop their gifts, to stand up and speak, and to bear testimony."[1].

A central committee of the YMMIA led by Junius F. Wells was formed in 1876 to oversee the organization, conduct missionary work, and issue general instructions. A YMMIA general superintendency (later renamed general "presidency") was formed by Church President John Taylor in 1880.

Chronology of the general superintendencies and presidencies of the Young Men

In the Aaronic Priesthood, the young men are sub-divided into three aged-based priesthood offices, which also serve as classes on Sunday:

When a young man reaches the age of 18, he is encouraged to begin attending the elders quorum. In certain instances, such as when a man turns 18 but is still in secondary school, an 18 year old will be encouraged to continue to attend the priests quorum and the activities of the Young Men organization.

Generally, each age group will hold a separate class for instruction during Sunday meetings after all adult and youth holders of the priesthood meet together for a brief opening prayer and hymn. Each class has a quorum president drawn from the members of the class, who in turn chooses two counselors to assist him. The bishop or branch president is the president of the priest quorum.

The adult Young Men President assists the priest quorum, while the First and Second Counselors assist the teacher quorum and the deacon quorum, respectively. Additional adult men may be asked to prepare class lessons.

On a church-wide level, the Aaronic Priesthood is supervised by the Presiding Bishopric and the local units of the Young Men organization are supervised by the General Presidency of the Young Men. Historically, the Presidency of the Young Men have been Seventies and general authorities of the church. However, in the April 2004 general conference of the church, Thomas S. Monson of the First Presidency announced that "a recent decision [has been made] that members of the Quorums of the Seventy [will] not serve in the general presidencies of the Sunday School and Young Men."[3]

All members of the Young Men are encouraged to participate in Aaronic Priesthood Duty to God program. Duty to God is a goal-setting and achievement program that helps young men make progress in four areas of personal development:

Scouting and other non-church programs

The Young Men organization has been involved in Scouting since 1913. Today, the organization is involved with Boy Scouts of America in the United States and Scouts Canada in Canada. Units of the church in other countries are not formally involved in Scouting. In the United Kingdom and in other Commonwealth countries, many church units participate in the Duke of Edinburgh's Award Scheme or its equivalent.

In addition to Sunday meetings, the members of the Young Men organization meet on a weekday evening for "Mutual", an hour to ninety minute activity. In the United States and Canada, Mutual is integrated with the weekly Scouting activity. Once per month, a Mutual activity is held in conjunction with the members of the Young Women organization. Whether or not the local organization is involved in Scouting, most congregations also organize annual or biannual Young Men Camps.