The Church Educational System (CES) of The Church of Jesus Christ of Latter-day Saints (LDS Church) consists of several institutions that provide religious and secular education for both Latter-day Saint and non-Latter-day Saint elementary, secondary, and post-secondary students and adult learners. Approximately 1.2 million individuals were enrolled in CES programs in approximately 135 countries during the 2003–2004 school year. CES courses of study are separate and distinct from religious instruction provided through LDS Church congregations. Paul V. Johnson, of the First Quorum of Seventy, has been the Commissioner of the Church Educational System since August 1, 2008.[1]

Seminaries and Institutes of Religion

Religious education programs designed for secondary students are called “seminaries." These are programs of religious education for youths ages 14–18 that accompany the students' secular education. In areas with large concentrations of Latter-day Saints such as Arizona, Colorado, Idaho, Nevada, New Mexico, Oregon, Utah, Washington, and Wyoming in the United States, and in some places in Alberta, Canada, instruction is offered on a released time basis during the normal school day in meetinghouses, or facilities built specifically for seminary programs, adjacent to public schools. Released-time seminary classes are generally taught by full-time employees. In areas with smaller LDS populations early-morning or home-study seminary programs are offered. Early-morning seminary classes are held daily before the normal school day in private homes or in meetinghouses and are taught by volunteer teachers. Home-study seminary classes are offered where geographic dispersion of students is so great that it is not feasible to meet on a daily basis. Home study seminary students study daily, but meet only once a week as a class. Home study classes are usually held in connection with weekly youth fellowship activities on a weekday evening.

The seminary education system of the LDS Church provides extensive study of theology using as texts the "standard works" of the church (Old Testament, New Testament, Book of Mormon and Doctrine and Covenants) throughout the school week, in addition to normal Sunday classes. The 4 courses are taught, 1 per year, on a rotating basis (the 2009-2010 curriculum follows the Book of Mormon). Seminary students are encouraged to study each scriptural text on their own time and to memorize a total of 100 scriptural passages or "scripture mastery" verses during their participation of the four-year program.

Unlike its use in other religious contexts, the word seminary, in a Latter-day Saint context, does not refer to a higher education program designed to train students that they may obtain a Church-based career.[2] LDS Seminary students do not get high school credit for their seminary studies.

Recently the LDS Church has undergone a pilot online seminary program to supplement or supplant the home-study program. This online pilot program has seen substantial success in helping to meet the needs of home-study students separated by distances that make meeting daily impractical. Through the Church’s online learning system Seminary teachers are able to incorporate student participation that includes sharing their own thoughts and ideas, as well as feelings and experiences they have had with the church. This helps provide a greater sense of community and connection as well as a chance to learn the Gospel in a similar way that students do in areas with a larger concentrations of LDS youth

Religious education is also provided for students who enroll in post-secondary education, or those of student age (generally for students ages 18–30), through institutes of religion. CES Institutes serve more than 150,000 students in more than 500 locations worldwide[3]. Many colleges throughout the United States either have institute buildings or active programs near their campuses. Institute classes are offered in leased or owned facilities adjacent to institutions of higher education. Many LDS chapels, also lend their facilities for institute classes. Institute buildings are designed to provide a place for institute students to increase faith and understanding, learn Church doctrines and life skills, carry out service projects, congregate, and socialize. The first Institute of Religion was established in Moscow, Idaho adjacent to the University of Idaho. Currently the largest Institute of Religion enrollment is found at the University of Utah in Salt Lake City, Utah. The largest Institute enrollment outside of the state of Utah is found at Idaho State University in Pocatello, Idaho. 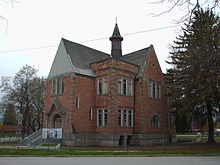 After the emigration to and settlement of the mountain west areas of the United States, the LDS Church set up a number of "stake academies," which mainly provided secondary education due to the lack of public schools in the late nineteenth and early twentieth centuries. A few of these academies eventually evolved into colleges or universities. Most, however, were closed with the emergence of public school districts. These included:

Church Board of Education and Boards of Trustees

Office of the Commissioner of Church Education

Chronology of the Commissioner of Church Education