ISU's seven colleges offer academic study in the natural and physical sciences, humanities, performing and visual arts, education, engineering, business, pharmacy, and technology, with a total of over 280 available programs.

Enrollment for the fall semester in 2009 stood at 15,553[1] total students, making ISU the second-largest major university in the State of Idaho in terms of full-time enrollment. Previously, ISU enrolled a large number of older, part-time students who lived and worked off-campus; this demographic is decreasing as ISU is attempting to make the transition to a more traditional undergraduate population. The student-teacher ratio at ISU is 16:1.[1]

Notable programs at ISU include pharmacy, physics, biology, liberal arts, anthropology, business, physician assistant and nursing. ISU is attempting to open the state's first medical school, and has begun a Family Medicine Residency Program, which was awarded a $960,000 federal grant.

On March 11, 1901, Governor Frank W. Hunt signed Senate Bill 53, thus establishing the Academy of Idaho, contingent upon private land donations being made for its site. The Academy of Idaho was officially opened in Pocatello on May 1, 1901². By 1910, enrollment had reached nearly 300 students, and the academy had purchased four additional city blocks in Pocatello to help meet its growing needs.

In 1915, the Academy of Idaho was renamed Idaho Technical Institute. The end of World War I brought an influx of students to the school, and enrollment surged to over 1,000 students. The early 1920s saw the beginning of intercollegiate competition. At this time the institute adopted the Bengal as the school mascot, as one of its early sports coaches was from Princeton; a school with orange and black theme colors and a tiger mascot.

In 1927 the school was renamed again, this time as the University of Idaho - Southern Branch. In 1947 it was renamed for the third time, to Idaho State College and became a four-year school. The following year, enrollment reached 2,000.

During World War II, Idaho was one of 131 colleges and universities nationally that took part in the V-12 Navy College Training Program which offered students a path to a Navy commission.[2]

In 1963, the school was renamed for the fourth and last time to Idaho State University, reflecting its new status as a full four-year public university. In the ensuing years, ISU continuously expanded both its enrollment and the programs it offered. The presidency of Richard L. Bowen, from 1985-2005, is particularly regarded as an era of growth: as of 2006, ISU had colleges in arts and sciences, business, education, engineering, health, pharmacy, and technology. However, Bowen resigned after a vote of no confidence from the faculty, who were angered by generous pay raises for administration members in the midst of calls for fiscal austerity.

On July 1, 2006, former Vice Chancellor of the University of Houston System and Vice President of the University of Houston Arthur C. Vailas became president of the university, replacing Michael Gallagher—who had served as president on an interim basis since Bowen's retirement in 2005.[3] In February 2011 the Idaho State University faculty voted no confidence in Vailas and called for his resignation.[4] Although Vailas faced mounting criticism and pressure from faculty to step down, he refused to resign and campus tension intensified, as the Idaho State Board of Education decided to suspend the university's faculty senate.[5] As a result, in June 2011, the American Association of University Professors censured the ISU.[6] 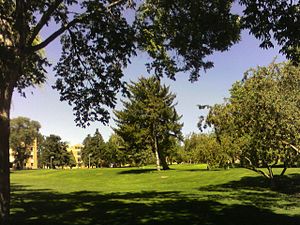 Student government is administered by the Associated Students of Idaho State University (ASISU). Each year a president and vice president are elected by the student body to administer and oversee a variety of activities either partially or fully funded by tuition-based fees. The ASISU Senate is the Association's legislative body. Made up of 20 student members elected by the students of each individual college (allocation of seats being based on enrollment of each college), the ASISU Senate is primarily responsible for allocating the ASISU budget.

The Student Activities Board, formerly the ASISU Program Board, oversees most of the student activity programming on campus. The board plans concerts, movie showings, homecoming activities, athletic-related events and other activities generally associated with student life.

Off-campus, many Pocatello businesses are geared towards the university community. Many ISU students take advantage of Pocatello's proximity to outdoor activities in eastern Idaho and northern Utah. ISU is approximately 150 miles (240 km) from the urban center of Salt Lake City. 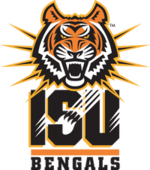 Home football games are played at the 12,000-seat Holt Arena (known as the Minidome until 1988), the oldest enclosed stadium on a college campus in the United States. Holt Arena also hosts indoor track and field events. After several seasons of playing at cozy Reed Gym (capacity: 2500), the men's basketball team will again play its home games inside Holt Arena.

For years the Bengals enjoyed athletic rivalries with the Boise State Broncos and the University of Idaho Vandals. However, as far as football is concerned, these rivalries diminished significantly after both BSU and UI left the Big Sky in 1996 to move up to Division I-A. The Bengals still enjoy a healthy rivalry in basketball with both the University of Idaho, who they have dominated in recent years, and Boise State, who has dominated ISU in recent years. With the diminishment of the rivalries with both U of I and BSU in football, the Weber State Wildcats of nearby Ogden, Utah, Montana State Bobcats of Bozeman, Montana, and the Montana Grizzlies of Missoula, Montana have become ISU's main football rivals.

In 2008, Athletic Director Paul Bubb resigned after University officials discovered a long-standing $800,000 shortfall in the Athletic Department budget. He was then replaced by Jeff Tingey, the son of the university vice president. The men's golf team was eliminated as a money saving measure although it was one of the least expensive teams that ISU fields.[citation needed]

Idaho State University is looking into starting a swimming team.

In October 2009 Idaho State University Director of Athletics Jeff Tingey announced that the contract of head football coach John Zamberlin would be extended for two more years, meaning Zamberin will be on the Bengal sidelines manning the program through the 2011 season.

Hired in late December 2006, Zamberlin's record at ISU is just 4-25. The decision has been highly criticized by many students, faculty, and community members. The administration have stood by their decision, citing an increase in athlete attendance in classes and graduation rates as a direct result of Zamberlin's coaching.

In 2010, the Bengals went 1-10 overall and 0-8 in the Big Sky Conference. Zamberlin was fired and former Eastern Washington and Montana State coach, Mike Kramer, was hired.[8] Among his assistants are former University of Alabama football players Todd Bates and Rudy Griffin.[9]

Since 1996, an old rivalry with the Weber State University Wildcats of nearby Ogden, Utah has intensified to become ISU's main rival in football. The Bengals also enjoy intense rivalries with both the University of Montana Grizzlies, and Montana State University Bobcats.

In March 1977, the men's basketball team made national headlines by defeating the UCLA Bruins 76-75 in the West regional semifinal of that year's NCAA Division I Basketball Tournament. The win qualified the Bengals for their only appearance to date in the Elite Eight. This is by far the high-water mark for Bengals basketball, and marked the first time since 1966 that UCLA failed to reach the Final Four. The Bengals were subsequently eliminated in the West regional final by the UNLV Runnin' Rebels.