Criticism of the Book of Mormon

Criticism of the Book of Mormon

The Book of Mormon, published in 1830 by American religious leader Joseph Smith (who claimed it to be a translation of an ancient Native American record), is the subject of criticism relating to its origin, text, and historical accuracy.

Critics reject Smith's explanation of the origin of the Book of Mormon. Joseph Smith said that the Book of Mormon was originally an ancient native-American record written on golden plates, and that God gave him the power to translate it into English. Critics note that there is no physical proof of the existence of golden plates; Smith said that the angel Moroni reclaimed the plates once he had completed the translation. Smith acquired affidavits from 11 men, known as the Book of Mormon witnesses, claiming that they had been shown the plates; their testimony is typically published at the beginning of the Book of Mormon. While none of these men ever retracted their statement, critics nevertheless discount these testimonies for varying reasons, primarily because most of these men were closely interrelated.

Critics deny that the Book of Mormon is of ancient origin. They assert that portions of the Book of Mormon were plagiarized from modern publications of Smith's time, including the King James Bible,[1][2] The Wonders of Nature,[3][4] View of the Hebrews,[5][6][7] and an unpublished manuscript written by Solomon Spalding.[8][9][10] Critics have varying theories about the true authorship of the Book of Mormon, but most conclude that Smith fabricated it himself, or possibly with the aid of Oliver Cowdery.

Critics view the language patterns, phrases, and names in the Book of Mormon as evidence that it is not authentic.

Critics claim that language patterns in the Book of Mormon indicate that it is merely a repetition of rhetorical patterns found in the Old Testament. They point out that the Book of Mormon contains many words and phrases that are not consistent with the time frame or location of the stories included in the book. Supporters of the Book of Mormon note its repeated use of chiasmus—a figure of speech utilizing inverted parallelism—and claim it is evidence to support the book's ancient origin. Critics argue that while chiasmus appears in short form within ancient classical works of Rome, the complex stylization of these passages found in the Book of Mormon is more similar to that found in works of the Renaissance and into the 18th/19th centuries. There is no evidence of chiasmus in the ancient literature of the Near East or within the known rhetoric of ancient Native American cultures.

Some critics theorize that Smith derived the account of the golden plates from treasure-hunting stories of William Kidd. Critics base this theory on the similarity of the names from Smith's account—Moroni and Cumorah—to the location Moroni, Comoros, related to Kidd's hunt for treasure. Apologists argue that it was unlikely that Smith had access to this material.

Main article: Historicity of the Book of Mormon

Critics discredit the historical accuracy of the Book of Mormon. They note various issues, including anachronisms, geographical inconsistencies, and lack of genetic evidence.

Apologists offer varying views on these anachronisms, typically countering them in one of two ways. One claim is that archaeological evidence may exist that has not yet been found. Another is that Joseph Smith used English words in a generic way, sometimes referring to an item other than that which the direct English word would imply. 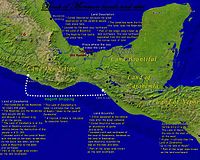 Critics point out that there are many inconsistencies and implausibilities in the story of the Israelites coming from the Mid-East to the Americas, and in the geographical descriptions of the lands in the Americas in which the stories take place.

Main article: Genetics and the Book of Mormon

Divine nature of the book 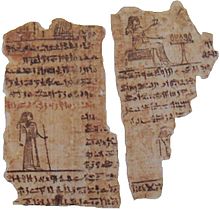 Egyptologists' translations of these fragments of the Joseph Smith Papyri do not coincide with Smith's translation.
Further information: Book of Abraham and Book of Mormon #Textual criticism

Critics reject the belief that the Book of Mormon is of divine origin; they discredit the book's divine origin by discrediting Joseph Smith. Critics point out that Joseph Smith also translated the Book of Abraham. Unlike the Book of Mormon, fragments of the documents from which Smith translated the Book of Abraham are available for inspection; Egyptologists find no resemblance between the original text and Smith's translation, casting doubt on Smith's claimed divine gift of translation.

Critics also discredit the divine origin of the Book of Mormon by noting the numerous revisions that have been made to the text. [5] [6] [11] [12][13][14][15] Though most changes are small spelling and grammar corrections,[16] critics claim that even these are significant in light of Smith's claims of divine inspiration.[17] Critics assert that some of these changes were systematic attempts to hide the book's flaws.[18][19]