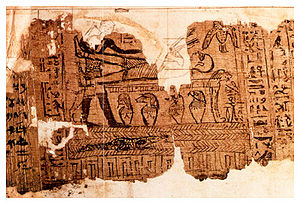 A portion of the Joseph Smith Papyri

The Joseph Smith Papyri (JSP) are eleven Egyptian papyrus fragments which were once owned by Joseph Smith, Jr., the founder of Mormonism. After Smith's death, they were eventually acquired in 1947 by the Metropolitan Museum of Art[1] (the Met) and brought forth again in 1966, after which they were returned to the church Smith founded, The Church of Jesus Christ of Latter-day Saints (LDS Church). The fragments are portions of a larger set of papyri that Joseph Smith purportedly translated into the Book of Abraham.[2]

The papyrus fragments are parts of some papyri and eleven mummies which were discovered in Thebes by Antonio Lebolo between 1818 and 1822. At that time Lebolo was working as superintendent of archaeological digs for Bernardino Drovetti. Sometime between 1822 and his death on February 19, 1830, Lebolo arranged to have them sold. The mummies were shipped to New York, where they were purchased by Michael Chandler in 1833. Over the next two years Chandler toured the eastern United States, displaying and selling some of the mummies.[3][4]

In July 1835, Chandler brought four mummies and associated papyri to Kirtland, Ohio, then headquarters of the LDS Church. Although the Rosetta Stone had been discovered in 1799, the ability to read Egyptian wasn't well developed until the 1850s. Chandler asked Joseph Smith to look at the scrolls and give some insight into what was written on them, due to Smith's notoriety and claim to have translated the Book of Mormon from golden plates.

Shortly after examining the scrolls Joseph Smith, Joseph Coe and Simeon Andrews purchased the four mummies and at least five papyrus documents for $2400[5]

After Joseph Smith's death, the mummies and papyri were in the possession of Smith's mother, Lucy Mack Smith and after her death on May 14, 1856, Smith's widow, Emma Hale Smith. On May 25, 1856, Emma sold "four Egyptian mummies with the records with them" to Mr. Abel Combs.[6] In 1947 the Met acquired them from Alice's widower. Aziz S. Atiya of the University of Utah found ten fragments of the remaining papyri in May 1966,[7] after he recognized the vignette was similar to Facsmile 1 in the Pearl of Great Price. Henry G. Fischer, curator of the Egyptian Collection at the Met, stated that an anonymous donation to the Met made it possible for the LDS Church to acquire the papyri.[8] The LDS Church published sepia tone photographs of the papyri in the February 1968 issue of the Improvement Era.

Egyptologist John A. Wilson stated that the recovered fragments indicate the existence of at least six to eight separate documents.[9] Another scholar estimated that the fragments constitute roughly one-third of Joseph Smith's original collection of papyri.[10] Scholars conclude that the recovered papyri are portions of the originals partly based on the fact that the fragments were pasted onto paper which had "drawings of a temple and maps of the Kirtland, Ohio area" on the back and were accompanied by an affidavit by Emma Smith stating that they had been in the possession of Joseph Smith.[11]

Discovery of the Church Historian's Fragment

In addition to the ten fragments that were discovered at the Metropolitan Museum, another fragment was located. In the same article in the February 1968 issue of the Improvement Era that contained the near full size sepia color reproductions of the papyri, Jay M. Todd, Editorial Associate for the magazine, discussed the discovery of a fragment which had been stored with the manuscript of the Egyptian Alphabet and Grammar and had been in the Church Historian's archives since at least 1908. Todd referenced an entry in the Church Historian's Office files dated Wednesday, October 17, 1855 describing several items which were being transferred to the newly constructed Historian's Office, including "...three plates of the Book of Abraham" and a "red box with papers, blanks, journal, stereotype and plates."

Todd went on to discuss an entry from a personal journal dated Saturday, July 11, 1846, describing a meeting between "Brigham Young and the Brethren" and Chief Banquejappa of the Pottawatomie [sic] tribe during which the Chief gave Brigham Young "two sheets of heiroglyphics from the Book of Abraham" and a letter dated 1843 that had been given to them by Joseph Smith. Todd referred to the background of the Historian's fragment as "most puzzling" and stated that William Lund and Earl Olsen, assistant Church Historians, did not recall any information about the fragment except that it had been there with the Egyptian Alphabet and Grammar throughout their service, which dated to 1911.

The Church Historian's fragment was labeled IX by Hugh Nibley and appears on page 40-H of the Improvement Era article, with the text:

With our readers, the staff of The Improvement Era will be looking forward with eager anticipation to additional developments in this fascinating story, and the unfolding of the meaning of the heiroglyphics and illustrations on these valuable manuscripts as they are given by Dr. Nibley in his articles.

Comparison of Joseph Smith Papyrus I with other similar vignettes

As of 1998, there were twenty-nine known examples of the Book of Breathings Made by Isis, of which the Joseph Smith papyri fragment is an example. Of those twenty-nine, eighteen have vignettes associated with them.[13] A comparison of the Book of Abraham facsimiles with these other documents indicates that the Book of Abraham Facsimile No. 1 (derived from JSP I) is unique in at least two ways;[14] it is the only version of a Book of Breathings Made by Isis[clarification needed] with this particular image[clarification needed] and the position of the legs of the reclining figure, with one raised, is also unique.[15] This is significant because even minor differences in the images or content of the missing portions of the papyri could have an effect on interpretation of the images and text and accuracy of Smith's explanations.[clarification needed].[16]

The editors of an independent quarterly journal Dialogue: A Journal of Mormon Thought, arranged for John A. Wilson and Klaus Baer of the Oriental Institute at the University of Chicago and Richard Anthony Parker, Director of the Department of Egyptology at Brown University to translate the text from the photographs.[17] Their translations were published in Dialogue in the summer and autumn of 1968.[18][19] The fragments are portions of three original documents as shown below.

The Breathing Permit belonging to the priest Hôr, son of the priest Osorwêr and the lady Tikhebyt

The handwriting was identified as being "of the late Ptolemaic or early Roman Period, about the time of Christ".[21] Jan Quaegebeur has suggested a date in the first half of the second century B.C.[22]

A portion of Klaus Baer's translation is as follows starting with JSP I and the vignette from right to left (lacunae in the manuscript are shown with an ellipsis or "[?]"):

"...the prophet of Amonrasontêr, prophet [?] of Mîn Bull-of-his-Mother, prophet [?] of Khons the Governor...Hôr, justified, son of the holder of the same titles, master of secrets, and purifier of the gods Osorwêr, justified [?]...Tikhebyt, justified. May your ba live among them. and may you be buried in the West..."[23]

"May you give him a good, splendid burial on the West of Thebes just like..."[24]

According to Baer, Coenen and Quaegebeur, the scene represents the resurrection of Hor (as Osiris) aided by Anubis.[25] Osiris lies on a lion couch, with Anubis, the jackal headed god standing over him. Four canopic jars are shown below the figures, which have lids representing the four sons of Horus, Imset, Hapi, Qebeh-senuwef, and Duwa-mutef. According to Baer, Osiris was "almost certainly represented as ithyphallic, ready to beget Horus", grasping his phallus.[26] Michael D. Rhodes says this interpretation is unlikely because in all other conception scenes the reclining figure is nude and in this one he is wearing a kilt[citation needed].

"Osiris shall be conveyed into the Great Pool of Khons -- and likewise Osiris Hôr, justified, born to Tikhebyt, justified -- after his arms have been placed on his heart and the Breathing Permit (which [Isis] made and has writing on its inside and outside) has been wrapped in royal linen and placed under his left arm near his heart; the rest of his mummy-bandages should be wrapped over it. The man for whom this book has been copied will breathe forever and ever as the bas of the gods do."[27]

"Here begins the Breathing Permit, which Isis made for her brother Osiris in order to revive his ba, to revive his corpse, and to make his entire body young again, so that he might appear gloriously in heaven in the disk of the moon, and that his corpse might shine in Orion in the belly of Nut -- and in order that the same might happen to Osiris Hôr...Keep it secret! Do not let anyone read it. It is useful for a man in the Necropolis, to help him live again and it has worked successfully millions of times."[28]