In the Latter Day Saint tradition, Apostles and prophets are believed to be the foundation of the church, with Jesus Christ himself the chief cornerstone.[2] The Articles of Faith, written by Joseph Smith, Jr., also mentions Apostles: "We believe in the same organization that existed in the Primitive Church, namely, apostles, prophets, pastors, teachers, evangelists, and so forth."

Apostles in The Church of Jesus Christ of Latter-day Saints 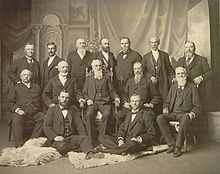 The First Presidency and the Twelve Apostles in September 1898. (Reed Smoot is missing in this photograph.)

In The Church of Jesus Christ of Latter-day Saints (LDS Church), Apostle is the highest priesthood office of the Melchizedek Priesthood. The President of the Church is always an Apostle, as are the members of the Quorum of the Twelve Apostles. In practice, counselors in the First Presidency are almost always Apostles as well. There are always twelve Apostles in the LDS Church. Thomas S. Monson is President of the church and Henry B. Eyring and Dieter F. Uchtdorf are first and second counselors respectively. President Uchtdorf was called to the First Presidency in February 2008 as part of the reorganization necessitated by Gordon B. Hinckley's death and Monson's appointment as president. The vacancy in the Quorum of the Twelve was filled by D. Todd Christofferson in the April 2008 General Conference.

Following their calling to the Apostleship, members of the Quorum are sustained in general conference as Apostles and prophets, seers, and revelators. This procedure also takes place at other large meetings of church members such as ward and stake conferences. Each is sustained by name.

The Bible Dictionary of the LDS Church defines apostle as meaning "one sent forth" and elaborates as follows:

[Apostle] was the title Jesus gave (Luke 6: 13) to the twelve whom he chose and ordained (John 15: 16) to be his closest disciples during his ministry on earth, and whom he sent forth to represent him after his ascension into heaven. The calling of an apostle is to be a special witness of the name of Jesus Christ in all the world, particularly of his divinity and of his bodily resurrection from the dead (Acts 1: 22; D&C 107: 23). Twelve men with this high calling constitute an administrative council in the work of the ministry. When a vacancy occurred with the death of Judas Iscariot, Matthias was divinely appointed to that special office as a member of the council (Acts 1: 15-26). Today twelve men with this same divine calling and ordination constitute the Quorum of the Twelve Apostles in The Church of Jesus Christ of Latter-day Saints. The title was also applied to others who, though not of the number of the original twelve, yet were called to serve as special witnesses of the Lord. Paul repeatedly spoke of himself as an apostle (Rom. 1: 1; 1 Cor. 1: 1; 1 Cor. 9: 1; Gal. 1: 1). He applied the titles to James, the Lord’s brother (Gal. 1: 19), and also to Barnabas (1 Cor. 9: 5-6; cf. Acts 14: 4, 14). The New Testament does not inform us whether these three brethren also served in the council of the Twelve as vacancies occurred therein, or whether they were apostles strictly in the sense of being special witnesses for the Lord Jesus Christ. Jesus is referred to as an apostle in Heb. 3: 1-2, a designation meaning that he is the personal and select representative of the Father.[3]

Bruce R. McConkie also describes each elder and member of the Church as an apostle:

Every elder in the Church is or should be an apostle; that is, as a minister of the Lord and as a recipient of personal revelation from the Holy Ghost, every elder has the call to bear witness of the truth on all proper occasions. Indeed, every member should have apostolic insight and revelation, and is under obligation to raise the warning voice. (D&C 88:81; Mosiah 18:9)[4]

McConkie also explained the meaning of the word "in the ordained sense":

...an apostle is one who is ordained to the office of the Melchizedek Priesthood. Ordinarily those so ordained are also set apart as members of the Council of the Twelve and are given all of the keys of the kingdom of God on earth. This apostleship carries the responsibility of proclaiming the gospel in all the world and also of administering the affairs of the Church. Christ "chose twelve, whom also he named apostles" (Luke 6:13), and upon their shoulders the burden of the kingdom rested after he ascended to his Father (1 Cor. 12:28.) The original Twelve in latter-days were selected by revelation by the Three Witnesses to the Book of Mormon (D. & C. 18:26-47.)[5]