The XScale, a microprocessor core, is Intel's and Marvell's implementation of the ARMv5 architecture, and consists of several distinct families: IXP, IXC, IOP, PXA and CE (see more below). Intel sold the PXA family to Marvell Technology Group in June 2006.[1]

The XScale architecture is based on the ARMv5TE ISA without the floating point instructions. XScale uses a seven-stage integer and an eight-stage memory superpipelined microarchitecture. It is the successor to the Intel StrongARM line of microprocessors and microcontrollers, which Intel acquired from DEC's Digital Semiconductor division as the side effect of a lawsuit between the two companies. Intel used the StrongARM to replace its ailing line of outdated RISC processors, the i860 and i960.

All the generations of XScale are 32-bit ARMv5TE processors manufactured with a 0.18 µm or 0.13 µm (as in IXP43x parts) process and have a 32 kB data cache and a 32 kB instruction cache. First and second generation XScale cores also have a 2 kB mini-data cache. Products based on the 3rd generation XScale have up to 512 kB unified L2 cache.[2]

The XScale core is used in a number of microcontroller families manufactured by Intel and Marvell, notably:

There are also standalone processors: the 80200 and 80219 (targeted primarily at PCI applications).

The PXA210 was Intel's entry-level XScale targeted at mobile phone applications. It was released with the PXA250 in February 2002 and comes clocked at 133 MHz and 200 MHz.

The PXA25x family consists of the PXA250 and PXA255. The PXA250 was Intel's first generation of XScale processors. There was a choice of three clock speeds: 200 MHz, 300 MHz and 400 MHz. It came out in February 2002. In March 2003, the revision C0 of the PXA250 was renamed to PXA255. The main differences were a doubled internal bus speed (100 MHz to 200 MHz) for faster data transfer, lower core voltage (only 1.3 V at 400 MHz) for lower power consumption and writeback functionality for the data cache, the lack of which had severely impaired performance on the PXA250.

Intel also added many new technologies to the PXA27x family such as: 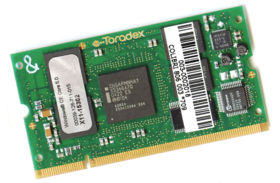 In August 2005 Intel announced the successor to Bulverde, codenamed Monahans.

They demonstrated it showing its capability to play back high definition encoded video on a PDA screen.

The new processor was shown clocked at 1.25 GHz but Intel said it only offered a 25% increase in performance (800 MIPS for the 624 MHz PXA270 processor vs. 1000 MIPS for 1.25 GHz Monahans). An announced successor to the 2700G graphics processor, code named Stanwood, has since been canceled. Some of the features of Stanwood are integrated into Monahans. For extra graphics capabilities, Intel recommends third-party chips like the NVIDIA GoForce chip family.

In November 2006, Marvell Semiconductor officially introduced the Monahans family as Marvell PXA320, PXA300, and PXA310.[3] PXA320 is currently shipping in high volume, and is scalable up to 806 MHz. PXA300 and PXA310 deliver performance "scalable to 624 MHz", and are software-compatible with PXA320. 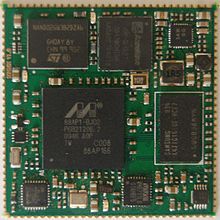 PXA168 System On Module by tianyeit.com

The PXA90x was released by Marvell and combines an XScale Core with a GSM/CDMA communication module.[5] The PXA90x is build using a 130 nm process[6]

The PXA930 and PXA935 processor series were built using an architecture developed by Marvell,[7] instead of using an Xscale or ARM design. This design, called the Sheeva core,[8] is ARM-compliant. The Sheeva core is a so-called Tri-core architecture[8] codenamed Tavor; Tri-core means it supports the ARMv5TE, ARMv6 and ARMv7 instruction sets.[8][9] This new architecture was a significant leap from the old Xscale architecture. The PXA930 uses 65 nm technology[10] while the PXA935 is build using the 45 nm process.[9]

The IOP line of processors is designed to allow computers and storage devices to transfer data and increase performance by offloading I/O functionality from the main CPU of the device. The IOP3XX processors are based on the XScale architecture and designed to replace the older 80219 processor and i960 family of chips. There are ten different IOP processors currently available: IOP303, IOP310, IOP315, IOP321, IOP331, IOP332, IOP333, IOP341, IOP342 and IOP348. Clock speeds range from 100 MHz to 1.2 GHz. The processors also differ in PCI bus type, PCI bus speed, memory type, maximum memory allowable, and the number of processor cores.

The XScale core is utilized in the second generation of Intel's IXP network processor line, while the first generation used StrongARM cores. The IXP network processor family ranges from solutions aimed at small/medium office network applications , IXP4XX, to high performance network processors such as the IXP2850, capable of sustaining up to OC-192 line rates. In IXP4XX devices the XScale core is used as both a control and data plane processor, providing both system control and data processing. The task of the XScale in the IXP2XXX devices is typically to provide control plane functionality only, with data processing performed by the microengines, examples of such control plane tasks include routing table updates, microengine control, memory management.

XScale microprocessors can be found in products such as the popular RIM BlackBerry handheld, the Dell Axim family of Pocket PCs, most of the Zire, Treo and Tungsten Handheld lines by Palm, later versions of the Sharp Zaurus, the Motorola A780, the Acer n50, the Compaq iPaq 3900 series and many other PDAs. It is used as the main CPU in the Iyonix PC desktop computer running RISC OS, and the NSLU2 (Slug) running a form of Linux. The XScale is also used in devices such as PVPs (Portable Video Players), PMCs (Portable Media Centres), including the Creative Zen Portable Media Player and Amazon Kindle E-Book reader, and industrial embedded systems. At the other end of the market, the XScale IOP33x Storage I/O processors are used in some Intel Xeon-based server platforms.

On June 27, 2006, the sale of Intel's XScale PXA mobile processor assets was announced. Intel agreed to sell the XScale PXA business to Marvell Technology Group for an estimated $600 million in cash and the assumption of unspecified liabilities. The move was intended to permit Intel to focus its resources on its core x86 and server businesses. Marvell holds a full Architecture License for ARM, allowing it to design chips to implement the ARM instruction set, not just license a processor core.[15]

The XScale effort at Intel was initiated by the purchase of the StrongARM division from Digital Equipment Corporation in 1998.[17] Intel still holds an ARM license even after the sale of XScale.[17]