Ministry of Highways and Infrastructure (Saskatchewan)

Ministry of Highways and Infrastructure (Saskatchewan) 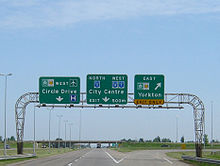 Routing of SK highways around Saskatoon 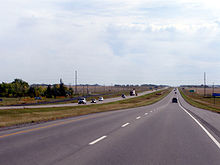 All ferries in Saskatchewan are operated by the Government of Saskatchewan and, with the exception of the Wollaston Barge Ferry, are toll free. All are seasonal, with ferries generally operating from mid April to mid November, depending on ice conditions. The ferries operated include:[3]

The Policy and Programs Division works with other legislative and regulatory agencies to ensure an optimal transportation network is provided via road, rail, air, and marine.[1]

Corporate Services Division is responsible for the budgeting, finances, and forecasting for the needs of the Ministry of Highways and Infrastructure.[1]

The Communications Branch of the Ministry of Highways and Infrastructure maintains the news releases, safety awareness and education programs.[1]

Area Transportation Planning (ATP) Support Program analyzes transportation in regional areas to provide funding for regional needs.[1] Committees which comprise representatives from the local rural and urban municipalities, Regional Economic Development Authorities (REDA), Saskatchewan Urban Municipalities Association (SUMA), Saskatchewan Association of Rural Municipalities (SARM), and Highways and Infrastructure(MHI) analyse local needs and the effects of the increased use of grain via truck transportation and the decreased use of rail transport is having on road infrastructure.[2] There are currently 9 committees which comprise the majority of Saskatchewan except for an area near La Ronge and South End.

Groups or individuals may sponsor a 3 kilometres (1.9 mi) stretch of highway to pick up litter and maintain highway appearances.[6] 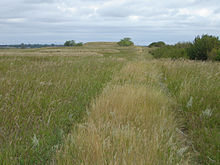 A person could work for the municipality and have his earnings put toward the taxes on his land; at one time, money collected in each Division stayed in that Division....The RM has as its responsibilities for many areas: agricultural programs and concerns in general; tax collections for needs of the municipality — road construction and maintenance; protective services — pest control, fire protection, weed control, environmental development, cultural and educational services; medical and veterinary needs and so forth.
—Tecumseh No. 65 [8]

Originally roadwork was done by horsepower, and the municipality owned its horses and equipment. It was found that roadwork under the supervision of a councilor cost half as much as that under a road commission system. There were problems with labor. One cold November payday the whole crew quit, with not one left to even feed the horses. In 1909 a foreman shot one of his crew; the [Indian Head] council minutes make no further comment.
—History of Indian Head and District Inc.

The building of these roads is under the personal supervision of the rural councilors of the R.M. The Provincial Government each year makes a substantial grant to the Municipality for permanent trunk road building.
—Moosomin, Saskatchewan. Board of Trade

In 1913 the road system consisted of miles of prairie trails. The roads gradually improved with the assistance of jointly funded Provincial and Municipal road programs such as the Grid Road program, the Main Farm Access program, and the Super Grid system which led to the eventual formation of Municipal Maintenance Areas. The RM's of Gull Lake, Carmichael, and Webb formed Maintenance Area No. 1, the first in the Province.
—Sask Biz Piapot No. 110[9]

During the term of office for Eiling Kramer, 1972–1980, the Provincial Highway received extensive funding and paving for the entire system neared completion.[10]Saskatchewan Highway 11 was restructured under the term of office of David Boldt, Minister 1966-1971.[11] John T. Douglas, during his term of office 1944-1960 established the Saskatchewan Transportation Company as a Crown Corporation of the government.[12] Alan Carl Stewart, Minister of Highways 1929-1934, allocated $20 million for highway construction in Saskatchewan.[13] George Spence , Minister of Highways 1927-1929, was responsible for the initiation of numbering Saskatchewan highways.[14]