The FIBA World Championship is an international basketball competition contested by the men's national teams of the members of the International Basketball Federation (FIBA), the sport's global governing body. The championship has been held every four years since the inaugural tournament in 1950, except for two occasions.

The tournament structure is similar, but not identical, to that of the FIFA World Cup; both of these international competitions have been played in the same year since 1970. A parallel event for women's teams, the FIBA World Championship for Women, is also held quadrennially, in the same year as the men's event, but in a different country. The current format of the tournament involves 24 teams competing for the title at venues within the host nation. The winning team receives the Naismith Trophy, first awarded in 1967. The current champions are the United States, who defeated Turkey in the final of the 2010 tournament.

The FIBA World Championship was conceived at a meeting of the FIBA World Congress at the 1948 Summer Olympics in London.[1] Long-time FIBA Secretary-General Renato William Jones urged FIBA to adopt a World Championship, similar to the FIFA World Cup, to be held in every four years between Olympiads. The FIBA Congress, seeing how successful the 23-team Olympic tournament was that year, agreed to the proposal, beginning with a tournament in 1950. Argentina was selected as host, largely because they were the only country willing to take on the task.[2] Argentina took advantage of the host selection, winning all their games en route to becoming the first FIBA World Champion.

In 1994, professional players participated in the tournament for the first time.[3] Although the United States initially dominated with NBA players, other nations eventually used professional players to finally catch up to the four powerhouse countries. In 2002, Argentina, led by four future NBA players, captured the silver medal, while NBA player and tournament MVP Dirk Nowitzki led Germany to the bronze, its first ever World Championship medal. Meanwhile, the United States' team, made up entirely of NBA players, struggled to a sixth place finish. In 2006, emerging powerhouse Spain beat Greece in the first appearance in the final for both teams. Spain became only the seventh team (Yugoslavia and FR Yugoslavia are counted separately in the FIBA records) to capture a World Championship gold. This new era of parity convinced FIBA to expand the tournament to 24 teams for both the 2006 and 2010 editions of the tournament.[4] Currently FIBA expects to have 24 teams again at the 2014 FIBA World Championship, and is considering expanding to 32 teams for future events.[5]

The World Championship has used various forms of qualification throughout its history. The first five tournaments were held in South America and participation was dominated by teams from the Americas. At the first tournament, FIBA intended for the three Olympic medalists to compete, plus the host Argentina and two teams each from Europe, Asia, and South America. However, no Asian team was willing to travel to the event, so six of the ten teams were from the Americas. European powerhouse Soviet Union later made their first appearance in 1959 after missing the first two events.

In the tournament's early years, only Europe and South America had established continental tournaments, so participation in the tournament was largely by invitation. Later, Asia added a continental championship in 1960, followed by Africa in 1962, Central America in 1965, and Oceania in 1971, As a result of these changes, qualification became more formalized starting with the 1967 tournament. In that year, the Asian champion received an automatic berth in the tournament, joining the top European and South American teams. In 1970, the African and Oceanian champion each received a berth, while the Centrobasket champion and runner-up were each invited. For most of these years, the tournament host, defending World Champion, and top Olympic basketball tournament finishers also qualified for the event.

Since 1970, qualification has continued to be based on the continental competitions and the Olympic tournament. The only major change came in the 1990 FIBA World Championship, when the tournament started taking qualifiers from the newly redesigned FIBA Americas Championship rather than from North, Central, and South America individually. After the tournament expanded to 24 teams in 2006, the tournament has allocated qualification as follows:[6]

Each of the five continental championships also serves as qualification for the Olympics, so all are held every two years. The year immediately preceding the World Championship is used to determine the berths at the tournament. For example, all of the berths at the 2010 FIBA World Championship were determined by continental championships held in 2009. After the first twenty teams have qualified, FIBA then selects four wild card teams, based on sporting, economic, and governance criteria, as well as a required registration fee from each team to be considered by the FIBA board.[7] Of the four wild cards, only three can come from one continental zone. In each of the two tournaments that the wild card system has been in place, FIBA has selected the maximum three European teams to compete in the event.

For the various formats used in previous tournaments, see History of the FIBA World Championship#Format of each final tournament.

The World Championship has existed in several different formats throughout the years as it has expanded and contracted between 10 and 24 teams. The first tournament in 1950 began with a ten-team double-elimination tournament followed by a six-team round robin round to determine the champion. Between 1954 and 1974, each tournament started with a group stage preliminary round; the top teams in each preliminary round group then moved on to a final round robin group to determine the champion. In 1978, FIBA added a gold medal game between the top two finishers in the final group and a bronze medal game between the third and fourth place teams. In each year between 1959 and 1982, the host team received a bye into the final group. Of the seven host teams in this era, only three medaled despite the head start. As a result, FIBA made the host team compete in the preliminary round starting in 1986.

In 2006, FIBA made the decision to expand back to 24 teams and introduced the format that is currently in place.[4] Under the current format, the teams are divided into four preliminary round groups of six teams each.[8] Should teams be tied at the end of the preliminary round, the ties are broken by the following criteria in order:

Since 1967, the champion of each tournament has been awarded the Naismith Trophy, named for basketball inventor James Naismith. A trophy had been planned since the first World Championship in 1950, but did not come to fruition until FIBA finally commissioned a trophy in 1965 after receiving a US$1,000 donation. The original trophy was used from 1967 through 1994. An updated trophy was introduced for the 1998 FIBA World Championship and the original now sits at the Pedro Ferrándiz Foundation in Spain.[9]

The updated trophy is designed in an Egyptian-inspired lotus shape upon which there are carved maps of the continents and precious stones symbolizing the five continents (FIBA Americas represents both North America and South America). Dr. Naismith's name is engraved on all four sides in Latin, Arabic, Chinese, and Egyptian hieroglyphs. The trophy stands 47 centimeters (18.5 inches) tall and weighs nine kilograms (twenty pounds).[10] 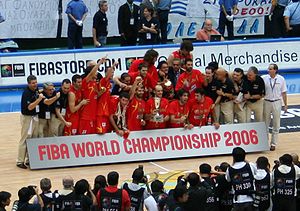 The Spanish national team celebrating the championship in Saitama.

For individuals, three players – Ubiratan Pereira Maciel and Marcel De Souza of Brazil and Phil Smyth of Australia – have appeared in five tournaments.[13] Six different players have won medals in four tournaments. Brazilian legend Oscar Schmidt is the runaway all-time leading scorer, scoring 916 career points in four tournaments between 1978 and 1990. Nikos Galis of Greece is the all-time leading scorer for a single tournament, averaging 33.7 points per game for the Greeks at the 1986 FIBA World Championship. FIBA also names a Most Valuable Player for each tournament. Since the tournament opened to professionals in 1994, NBA players have won four of the last five MVP trophies – Shaquille O'Neal for the United States in 1994, Germany's Dirk Nowitzki in 2002, Spain's Pau Gasol in 2006, and the USA's Kevin Durant in 2010. The only exception was Dejan Bodiroga of Yugoslavia, the MVP of the 1998 tournament, when the NBA players were not able to participate, due to 1998–99 NBA lockout.