Field hockey at the Summer Olympics

Field hockey was introduced at the Summer Olympic Games as a men's competition at the 1908 Games in London, with six teams, including four from the United Kingdom of Great Britain and Ireland.

Hockey was removed from the Olympics at the 1924 Paris Games due to the lack of an international sporting structure. The International Hockey Federation (FIH, Fédération Internationale de Hockey) was founded in Paris that year as a response to hockey's omission. Men's hockey became a permanent feature at the next Olympic Games, the 1928 Games in Amsterdam.

For a long period of time, the South Asian countries of India and Pakistan dominated the Olympics, with either India or Pakistan winning the men's gold medal in every Olympics from 1928 to 1968. Note that in the Olympic Games before 1948, British India included Pakistan. Pakistan and India gained independence in 1947.

Since 1968, various teams from around the world have seen gold-medal success at the Olympics. However, the inclusion of AstroTurf since 1976 is noted to have probably contributed to this decline in Indian and Pakistani medals, since the countries that were once dominant on grass have failed to adapt to Astroturf play. Since 1968, several countries in the Southern Hemisphere have won various medals in men's and women's field hockey, including Australia, New Zealand, Argentina, and Zimbabwe. A leading group of teams from the Northern Hemisphere has come from the Netherlands and from Germany.

The first women's Olympic hockey competition was held at the 1980 Summer Olympics in Moscow. Olympic field hockey games were first played on artificial turf at the 1976 Montreal Olympic Games. 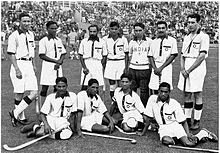 The Indian Hockey team at the 1936 Berlin Olympics, later going on to defeat Germany 8-1 in the final

Only players who participated in at least one game are counted.