The Currarino syndrome (also Currarino triad) is an inherited congenital disorder where (1) the sacrum (the fused vertebrae forming the back of the pelvis) is not formed properly, (2) there is a mass in the presacral space in front of the sacrum, and (3) there are malformations of the anus or rectum. It can also cause an anterior meningocele or a presacral teratoma.

The disorder is an autosomal dominant genetic trait[2] caused by a mutation in the HLXB9 homeobox gene. 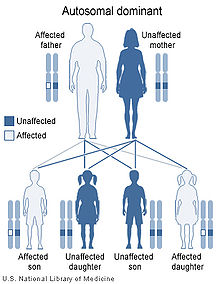 Currarino syndrome has an autosomal dominant pattern of inheritance