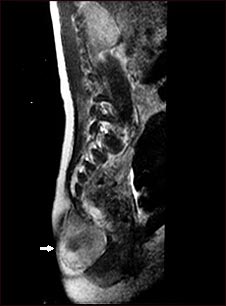 Caption = in the of an adult, oriented head up and facing right, with a sacrococcygeal teratoma (arrow) at the base of the spine
DiseasesDB =
ICD10 =
ICD9 =
ICDO =
OMIM =
MedlinePlus =
eMedicineSubj = med
eMedicineTopic = 2248
MeshID =

Sacrococcygeal teratoma (SCT) is a (a kind of tumor) located at the base of the (tailbone). It is thought to be a derivative of the .

SCT is seen in 1 in every 35,000 live births, and is the most common tumor in newborn humans. Most SCTs are found in babies and children, but SCTs have been reported in adults [Killen DA, Jackson LM (1964) "Sacrococcygeal teratoma in the adult" 88(3):425-433.] and the increasingly routine use of prenatal ultrasound exams has dramatically increased the number of diagnosed SCTs presenting in fetuses. Like other teratomas, an SCT can grow very large. Unlike other teratomas, an SCT sometimes grows larger than the rest of the fetus.

Sacrococcygeal teratomas are the most common type of s (both and ) diagnosed in , , and younger than 4 years. [ [http://www.cancer.gov/cancertopics/pdq/treatment/extracranial-germ-cell/HealthProfessional/page6 (PDQ) Sacrococcygeal Tumors in Children] ] SCTs occur more often in girls than in boys; ratios of 3:1 to 4:1 have been reported. [Rescorla FJ, Sawin RS, Coran AG, et al.: Long-term outcome for infants and children with sacrococcygeal teratoma: a report from the Childrens Cancer Group. J Pediatr Surg 33 (2): 171-6, 1998. [http://www.ncbi.nlm.nih.gov/entrez/query.fcgi?cmd=Retrieve&db=PubMed&list_uids=9498381&dopt=Abstract PUBMED Abstract] ]

Historically, sacrococcygeal teratomas present in 2 clinical patterns related to the child’s age, tumor location, and likelihood of tumor malignancy. With the advent of routine prenatal ultrasound examinations, a third clinical pattern is emerging.

* Fetal tumors present during prenatal ultrasound exams, with or without maternal symptoms. SCTs found during routine exams tend to be small and partly or entirely external. The internal SCTs are not easily seen via ultrasound, unless they are large enough to reveal their presence by the abnormal position of the fetal and other organs, but large fetal SCTs frequently produce maternal complications which necessitate non-routine, investigative ultrasounds.

* Neonatal tumors present at birth protruding from the sacral site and are usually mature or immature teratomas.

*Among infants and young children, the tumor presents as a palpable mass in the sacropelvic region compressing the bladder or rectum. [Rescorla FJ: Pediatric germ cell tumors. Semin Surg Oncol 16 (2): 144-58, 1999. [http://www.ncbi.nlm.nih.gov/entrez/query.fcgi?cmd=Retrieve&db=PubMed&list_uids=9988869&dopt=Abstract PUBMED Abstract] ] These pelvic tumors have a greater likelihood of being malignant. An early survey found that the rate of tumor malignancy was 48% for girls and 67% for boys older than 2 months at the time of sacrococcygeal tumor diagnosis, compared with a malignant tumor incidence of 7% for girls and 10% for boys younger than 2 months at the time of diagnosis. The pelvic site of the has been reported to be an adverse prognostic factor, most likely caused by a higher rate of incomplete resection.

*In older children and adults, the tumor may be mistaken for a , or it may be found during a rectal exam or other evaluation.

During , an SCT having an external component may appear as a fluid-filled cyst or a solid mass sticking out from the fetus' body. Fetal SCTs that are entirely internal may be undetected if they are small; detection (or at least suspicion) is possible when the fetal bladder is seen in an abnormal position, due to the SCT pushing other organs out of place.

At , the usual presentation is a visible lump or mass under the skin at the top of the buttocks crease. If not visible, it can sometimes be felt; gently prodded, it feels somewhat like a hardboiled egg. A small SCT, if it is entirely inside the body, may not present for years, until it grows large enough to cause pain, constipation and other symptoms of a large mass inside the , or until it begins to extend out of the pelvis. Even a relatively large SCT may be missed, if it is internal, because the bony conceals and protects it. s, including teratomas, are similarly concealed and protected by the .

Some SCTs are discovered when a child begins to talk at about age 2 years and complains of their bottom hurting or feeling "poopy" when they ride in a car seat.

Other tumors can occur in the sacrococcygeal and/or presacral regions

Smaller SCTs with an external component, seen in prenatal ultrasounds or at birth, often are mistaken for .Fact|date=August 2008 Cystic SCT and terminal myelocystocele are especially difficult to distinguish; for more accurate diagnosis, MRI has been recommended.

The preferred first treatment for SCT is complete surgical removal (ie, complete resection). The preferred approach to a small SCT is through the ; a large SCT may require an additional approach through the . Resection should include the coccyx and may also include portions of the . The surgery should include reattachment of the small muscles and ligaments formerly attached to the coccyx, in effect reconstructing the posterior perineum. If not, there is an increased risk of later in life.

The Altman type is significant in the contexts of management of labor and delivery, surgical approach, and complications of SCT. Serial ultrasound and MRI monitoring of SCTs in fetuses has demonstrated that the Altman type can change over time. As the tumor grows, it can push between other organs and through the perineum to the body surface where the tumor appears as a bulge covered only by skin. Sometimes, the tumor bulge later slips back inside the perineum.

Like all s, a sacrococcygeal teratoma has the potential to be malignant, and the standard of care requires long-term followup by an .

Management of most fetal SCTs involves prior to any treatment. An often used is as follows:

*Perform detailed ultrasound exam including fetal and flow analysis
**If fetal , , or
***If fetus not mature, perform or
***Else fetus mature, perform emergency
**Else no emergent problems, perform serial s and ultrasound s and plan delivery, as follows
***If emergent problems develop, return to top of decision tree
***Else if SCT over 5–10cm or , perform early (37 weeks gestation) elective Cesarean section
***Else SCT small and no complications, permit term

Emergent problems include maternal , , and . Poor management decisions, including interventions that are either premature or delayed, can have dire consequences.

In many cases, a fetus with a small SCT (under 5 or 10 cm) may be delivered vaginally.

SCTs are very rare in adults, and as a rule these tumors are benign and have extremely low potential for malignancy. This estimation of potential is based on the idea that because the tumor existed for decades prior to diagnosis, without becoming malignant, it has little or no potential to ever become malignant. For this reason, and because coccygectomy in adults has greater risks than in babies, some surgeons prefer not to remove the coccyx of adult survivors of SCT. There are case reports of good outcomes.

Maternal complications of pregnancy may include .

Later complications of the mass effect and/or surgery may include , other forms of , , and other chronic problems resulting from accidental damage to or sacrifice of nerves and muscles within the pelvis.

Although functional disability in survivors is common,

In rare cases, pelvic scarring may necessitate that a pregnant woman who is a SCT survivor deliver her baby by .