Cumberland Law School is unrelated to the University of the Cumberlands in Williamsburg, Kentucky, and is no longer a a part of Cumberland University In Lebanon, Tennessee.

Cumberland School of Law is an ABA accredited law school at Samford University in Birmingham, Alabama. The 11th oldest law school in the United States, it is 160 years old and has more than 11,000 graduates. Its alumni include two United States Supreme Court Justices;[2][3][4][5] Nobel Peace Prize recipient Cordell Hull, "the father of the United Nations";[6][7] over 50 U.S. representatives; and numerous senators, governors, and judges.

The school offers two degree programs: the 90-hour Juris Doctor (J.D.), and the Master of Comparative Law (M.C.L.), which is designed to educate foreign lawyers in the basic legal principles of the United States.[8] The school also offers six dual-degree programs, and is building a biotechnology law emphasis through its research center.[9] 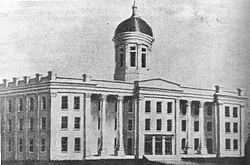 This summary is based on From Maverick to Mainstream,[10] a review of Cumberland's history and the development of the American legal education system.[11]

Langum and Walthall summarize the history of Cumberland Law School as:

From its very local, Tennessee origins in 1847, Cumberland...emerged as a premier law school with a national status. It excelled in faculty, teaching methodology, and numbers of students. Following the American Civil War, Cumberland rebuilt itself and ultimately succeeded on a grand scale with its single-year curriculum.[12]

Cumberland School of Law was founded on July 29, 1847 in Lebanon, Tennessee at Cumberland University. At the end of 1847, there were 15 law schools in the United States. Founder and first professor Judge Abraham Caruthers said,

I call it an adventure, I speak of it as an experiment.

Prior to the law school's official founding, Cumberland University facilitated the study of law and admitted a diverse student body, evidenced by graduates such as George W. Harkins, a Choctaw chief, who received a law degree from Cumberland and became a judge in 1834.

Prior to the founding of the United States' first law schools, the primary means for a legal education was apprenticeship. Establishing law schools was difficult in the early 19th century. Harvard was only able to reestablish its law school in 1829 and Yale in 1826. By 1859 Cumberland, Harvard, and the University of Virginia School of Law, were the three largest law schools in the United States. A year later, 1860, only 21 university law schools existed in the country, and, in no school, did the curriculum extend beyond two years.[13]

Students were taught through reading treatises, approximately two hours worth of recitations each morning, and a mandatory moot court program. Caruthers considered the law a science and the Socratic Method a necessity.[7] The cost was $50 a session and a $5 "contingent fee".[15] After the Civil War, this treatise method, the legal formalism of the school's approach, and Nathan Green Jr.'s unwillingness to make changes, were all considered reasons for Cumberland's drift out of the mainstream.[16]

April 13, 1861 jolted Cumberland out of its "Golden Age" when President Abraham Lincoln called for volunteers to quell the southern insurrection. The campus split within a week; some students joined the northern army; many joined the southern. Nathan Green Jr.'s father, a law professor, went home, but in fear of arrest, Abraham Caruthers fled to Marietta, Georgia, where he died a year later.[14]

During the war, professors John Carter and Nathan Green, Jr. fought as Confederate officers. Carter was killed, but Green survived the war. The campus did not. The trees were cut down and fences destroyed and burned. The Confederate Army burned the University buildings, apparently because a Confederate major was offended that Black Union soldiers had used them as barracks.[17]

The law school began the slow process of rebuilding. In July 1866, Cumberland adopted the image of the phoenix, the mythological Egyptian bird that is reborn from its own ashes. The new motto was "E Cineribus Resurgo" or "I rise from the ashes."[18]

In September 1865 classes resumed with 11 students, which soon grew to 20. The 1865 class included a Confederate General and Union colonel, enemies only a few months earlier. Nathan Green, Jr. kept the school together until Henry Cooper, a circuit judge, Andrew B. Martin, and Robert L. Caruthers, brother of deceased founder Abraham Caruthers, joined the faculty. Robert Caruthers had previously served as the state attorney general and had been elected Governor of Tennessee during the war in 1863, but was never innaugurated. Cooper did not serve on the faculty for long.[19]

In 1873 Robert Caruthers purchased Corona Hall from the Corona Institute for Women for $10,000, which he immediately donated to the University for use by the law school.

The destruction of the campus and the devastation of war had impoverished the school and it was almost 15 years before it saw students enter from outside the South, when a student from Illinois and a member of the Choctaw Nation[disambiguation needed

] enrolled at Cumberland. But there were few students from outside of the defeated Southern states, which Langum and Walthall claim underscored "how terribly the Civil War blighted Cumberland."[20]

Robert Caruthers persisted, despite the setbacks, and in 1878 Caruthers Hall was dedicated in his honor. This new school replaced Corona Hall, which had limitations. The new hall apparently had "excellent acoustics and hard seats" and is described as a:

splendid structure, built after the latest architectural style, is nearly one hundred feet from base to spire, and contains two recitation rooms for the Law Department, two Society Halls, a Library, and a chapel whose seating capacity is about seven hundred.[21] 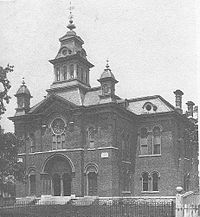 Caruthers Hall, from the Phoenix in 1903.

Despite the seemingly heroic efforts to keep the school alive, Cumberland was falling into the minority at the turn of the 20th century. It maintained a one-year curriculum when other schools moved toward longer terms, and it was entrenched with legal formalism, which had reached its peak in the 1870s and would soon be on the decline. In 1876, for instance, Harvard Law School began to encourage a three-year curriculum.[22] Through 1919, Cumberland did not adapt to the shift in legal education.[23]

Cumberland, which had once marked the high point of professional education, had become a captive of its own success. Unwilling to adopt modern techniques such as the case method, or to expand and deepen its curriculum by opting for the three-year standard, Cumberland became the symbol of the democratic bar.[23]

In 1903 Nathan Green, Jr. became the first dean of the law school. For the prior 57 years the school did not have this position, which was becoming more and more popular among law schools.

In 1915 Cumberland refurbished its halls with an $8000 grant from the U.S. government as reparation for federal occupancy during the Civil War.[26]

When Cordell Hull graduated from Cumberland, he commented on the diploma privilege, which granted the right to practice law without taking a bar exam, saying that:

according to custom, we members of the graduating class, the moment we received our diplomas, took them to the courthouse, where a district judge awaited us. He swore us in as members of the bar. I was not 20 years old.[27]

Cordell Hull is today honored at Cumberland with a Moot Court room bearing his name.

Cumberland eventually did adapt to the changing times, moving from Cumberland University in Lebanon, Tennessee, to Samford University in Birmingham, Alabama in 1961. It is only one of two law schools in the United States to have been sold from one university to another (the other being the sale of the law school from the University of Puget Sound to Seattle University).

Today the law school is known for its emphasis on trial advocacy and is building a biotechnology emphasis through its Biotechnology Center.

In December 2005 Cumberland adopted a long-term plan for the school. One call of the plan is to gradually downsize the number of students in order to provide smaller classes and closer individual attention to students. In 1995 the entering class was 212 and by 2007 that number had been reduced to 159. 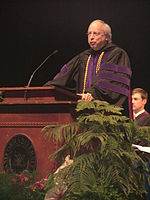 "The prevailing philosophy is simple: Practical skill outweighs raw knowledge, and application transcends erudition. If the goal were to produce great law students, the tenets might be exactly the opposite. Our goal is to produce exceptional lawyers. That's why Cumberland’s curriculum emphasizes the core competencies of legal practice: research, writing and persuasion."

The first year required classes are: Civil Procedure, Contracts, Property, Torts, Criminal Law, and Evidence. Students are divided into one of three sections, where the students remain together in their respective classes for the entire first year. First-year students are also enrolled in smaller sections for Lawyering and Legal Reasoning, a class that focuses on honing the students' ability to think and write like a lawyer. 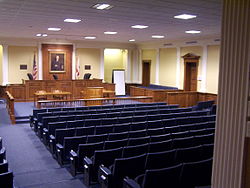 Students must also take Professional Responsibility and the MPRE, an exam that is required to practice in addition to the Bar exam.

The Center for Biotechnology, Law, and Ethics

The Center for Biotechnology, Law and Ethics focus is on the research and study of the ethical and legal issues arising from the biotechnology industry, which is important to the City of Birmingham.[9] Each year the Center sponsors a major symposium which attracts nationally known experts.

The 2007 Symposium, entitled “The United States Health-Care System: Access, Equity and Efficiency”, focused on the issues of health care delivery in the United States, particularly to the poor, the problems that exist and potential solutions to those problems. The symposium brought together experts from the University of Minnesota, the Saint Louis University School of Law and Texas A & M University and Cumberland.

The keynote address, which was also the Thurgood Marshall Lecture, was presented by United States Congressman Artur Davis, a leader on issues relating to the delivery of health care services.[29] 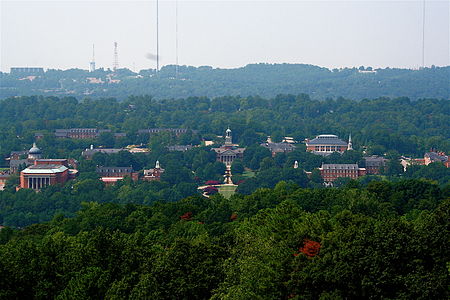 Bird's-eye view of the campus

The Center for Biotechnology, Law and Ethics - 2006 Biofuels Conference 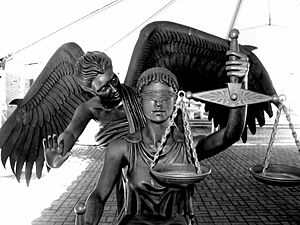 In 2008, Cumberland placed first out of 256 other teams in the American Association for Justice National Student Trial Advocacy Competition and in 2009 placed second, losing by one point.[40][41][42][43] The same year, Cumberland made the finals of the ABA National Appellate Advocacy competition. It was one of four from 30 teams in its region that went to the national finals in Chicago. Cumberland won third best brief in the region.

Housing for law students is not available on campus, but students typically rent apartments or buy houses in the surrounding community.

Competition for grades and rank can be aggressive, but rarely personal, and there is a surprising degree of camaraderie among the students, which many students consider to be atypical of the environment on most law school campuses. 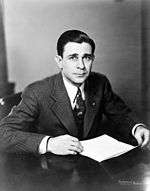 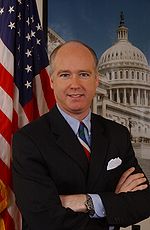 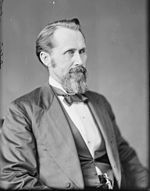 William Parker Caldwell - American politician and a member of the United States House of Representatives for the 9th congressional district of Tennessee. 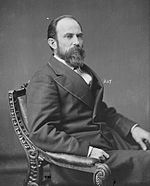