Artur Genestre Davis (born October 9, 1967) is a former member of the United States House of Representatives for Alabama's 7th congressional district, serving from 2003 to 2011 when he was succeeded by Terri Sewell, also a member of the Democratic Party.

After working as an intern at the Southern Poverty Law Center and then as a civil rights lawyer, he served as an assistant United States Attorney.

Davis ran for the House in the Democratic primary against 10-year incumbent Earl F. Hilliard. He criticized Hilliard for taking a trip to Libya in 1997 despite U.S. sanctions, but Davis lost the 2000 election 58%-34%.

Davis ran again in 2002 and was elected. He assumed office in January 2003. During the campaign, Hilliard notably questioned whether Davis was "black enough" to represent the district. Despite these attempts to divide the African-American vote, Davis defeated Hilliard narrowly in the primary, which required a runoff in June. He won the runoff easily, assuring him of victory in November in the heavily Democratic district.

He was challenged in the 2004 primary by Albert Turner Jr., a son of a leader of Selma's "Bloody Sunday" march and in the 2006 primary by political new-comer Eddison Walters. He easily won the challenges 88%-12% and 90%-9% respectively. He has only faced Republican opposition once, in 2004; he won easily with 74 percent of the vote. 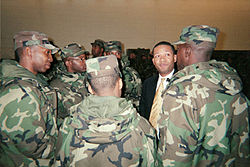 In the new Democratically controlled 110th Congress, Davis was assigned to the Committee on Ways and Means. The stature of that appointment, and the difficulty of raising sufficient funds, led Davis to postpone plans to challenge conservative Senator Jeff Sessions in 2008. In January 2007, Davis said that he was still interested in running on a statewide ticket in 2010, either for Governor, or for Senate if Richard Shelby elects to retire.[1] 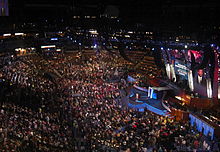 In 2007 he became the first Congressman outside Illinois to endorse Sen. Barack Obama for president in 2008.[2] At the 2008 Democratic National Convention, Davis gave a seconding speech formally placing Obama's name in nomination.[3]

Davis's name surfaced in media speculation as a potential Attorney General in Obama's cabinet.[4][5] However, Davis was quoted in The Birmingham News as stating that he did not anticipate such an offer, and would refuse it if made.[6]

As a freshman, he led the successful fight to reverse funding cuts for minority land grant colleges including Tuskegee University.[7] As a second term member, Congressman Davis won a floor fight to restore funding to the HOPE VI program for renovating public housing; he persuaded over sixty Republicans to vote with Democrats to save HOPE VI. In 2005, the congressman was the lead Democratic sponsor of a bill establishing a national cord blood bank, which will widen the availability of blood transfusions for thousands of patients who suffer from diseases such as sickle cell anemia and diabetes.[8] He received an A– grade on his voting record relating to veteran issues from Iraq and Afghanistan Veterans of America.[9]

Davis was the first member of the Congressional Black Caucus to demand that former House Ways and Means chair Charlie Rangel surrender his gavel in the wake of ongoing ethics issues.[10]

On February 6, 2009, Davis announced his candidacy for Governor of Alabama in 2010. His opponent in the Democratic primary was Agriculture Commissioner Ron Sparks.[14]

During the primary campaign, Davis downplayed matters of race and emphasized his independence from Democratic party orthodoxy. He caused controversy, including within his heavily minority congressional district, by voting against President Barack Obama's new health-care law—the only black Democrat in Congress to do so. He also refused to sit for the endorsement screenings of Alabama's black political groups, drawing criticism from some that he was an opportunist in search of white votes.[15] As a result, he became described as "the first African-American candidate in a statewide Alabama race to lose the black vote."[16]

On June 1, 2010, Davis lost the Democratic primary to Sparks, ending his gubernatorial bid. Afterwards, he announced he was retiring from politics and would return to private practice at the conclusion of his 2009-2011 term.[17] Davis was succeeded in Congress by fellow Democrat Terri Sewell, the first African-American woman elected to the United House of Representatives from Alabama.