In linguistics, Old Dutch (or Old West Low Franconian) denotes the forms of West Franconian spoken and written in the Netherlands and present-day northern Belgium during the Early Middle Ages. It is regarded as the primary stage in the development of a separate Dutch language. It evolved from Old Frankish around the 6th century and in turn evolved into Middle Dutch around the 12th century.

Old Dutch was spoken by the populace which erstwhile occupied present-day Netherlands, northern Belgium, parts of northern France, and the Lower Rhine and Westphalia regions of Germany. The inhabitants of present-day Dutch provinces—including Groningen, Friesland and the coast of North Holland—spoke Old Frisian, while those of the east (Achterhoek, Overijssel and Drenthe) exercised Old Saxon.

Relation with other West Germanic languages

In the Middle Ages, a dialect continuum subsisted between Old Low Franconian and Old Saxon; this was only recently interrupted by the simultaneous dissemination of standard languages within each nation and the dissolution of folk-dialects. Despite sharing some particular features, a number of disparities separate Old Saxon, Old English, and Old Dutch; one such difference is the Old Dutch utilization of -a as its plural a-stem noun ending, while Old Saxon and Old English employ -as or -os. Much of the grammatical variation between Old Dutch and Old Saxon is similar to that between Old Dutch and Old High German.

During the Merovingian period, the Middle Franconian dialects were influenced by Old Low Franconian, resulting in certain linguistic loans which yielded a slight overlap of vocabulary, most of which relating to warfare. In addition is the subsumption of the High German consonant shift, a set of phonological changes beginning around the 5th–6th century CE.

The other languages did not develop a uniform block discrete from Low Franconian as they do modernly. Today, nearly every continental European West Germanic language practices German as a standard, the only exception being the Dutch-speaking zone and Frisia. 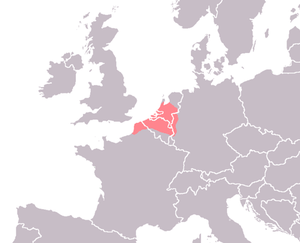 Area in which Old Dutch was spoken.

Old Dutch naturally evolved into Middle Dutch, having some distinctions which approximate those found in most medieval West Germanic languages. 1150 CE is often cited as the time of its discontinuation, but the date actually marks the inceptive period of profuse Dutch writing wherein the language is patently different from Old Dutch.

The most notable variance between Old and Middle Dutch is in a feature of speech known as vowel reduction; while round vowels in word-final syllables are rather frequent in Old Dutch, in Middle Dutch, such are leveled to a schwa.

The following is a translation of Psalm 55:18, taken from the Wachtendonck Psalms; it demonstrates the evolutionary arc of Dutch language—from the original Old Dutch, written ca. 900 CE, to modern Dutch—but so accurately reproduces the Latin word order of the original that there is little information what can be garnered on Old Dutch syntax. In modern Dutch, recasting is necessary to form a coherent sentence.

Phonologically, Old Dutch stands in between Old Saxon and Old High German, sharing some innovations with the latter, and others with the former. Generally, it is less conservative than either, rarely preserving older phonological stages not shared by one of the others. This may also be a result of its late attestation, however.

The table below lists the consonants of Old Dutch. If two phonemes appear in the same box, the first of each pair is voiceless, the second is voiced. Phonemes written in parentheses represent allophones and are not independent phonemes. For descriptions of the sounds and definitions of the terms, follow the links on the headings.

Final devoicing has become systematic in modern Dutch. It is reflected in spelling for f/v (leef-leven), s/z (kaas-kazen) but not for t/d, i.e., woord, "word", is spelled with a /d/ but pronounced with a [t].

In unstressed syllables, only three vowels seem to have been reliably distinguished: open, front and back. In the Wachtendonckse Psalmen with unstressed syllables the e and i merge together, as with o and u. This led to variants like dagi and dage ("day", dative singular) and tungon and tungun ("tongue", genitive, dative, accusative singular and nominative, dative, accusative plural). The forms with e and o are generally found later on, showing the gradual reduction of articulatory distinction, eventually merging into a schwa (/ə/). A short phrase from the gospel book of Munsterbilzen Abbey, written around 1130, still shows several unstressed vowels distinguished:

This was a late monument however, as the merging of all unstressed short vowels was already well underway by that time. Most likely the difference was only maintained in spelling traditions, but had been mostly lost in speech. With the introduction of new scribal traditions in the 12th and 13th century, these practices were abandoned, and unstressed vowels are consistently written as e from that time onward.

The length of a vowel was generally not represented in writing probably because the monks, who were the ones capable of writing and teaching how to write, tended to base the written language on Latin which also does not make a distinction in writing. For example: dag "day" (short vowel), thahton "they thought" (long vowel). Later on, the long vowels were sometimes marked with a macron to indicate a long vowel, e.g. ā. In some texts long vowels were indicated by simply doubling the vowel in question, e.g. the placename Heembeke and personal name Oodhelmus (both from charters written in 941 and 797 respectively).

A clear characteristic is the survival of the Germanic four-case system, which by Middle Dutch had started to become less distinct as a result of the collapse of full vowels in final position.

During the Old Dutch period, the distinction between the feminine ō-stems and ōn-stems began to disappear, with endings of one being transferred to the other declension and vice versa. This was part of a larger process in which the distinction between the strong and weak inflection was being lost, not only in feminine nouns but also in adjectives. This process is shown in a more advanced stage in Middle Dutch.

In its verb inflection Old Dutch reflects an intermediate stage between Old Saxon and Old High German. Like Old High German, it preserved the three different verb endings in the plural: -on, -et and -unt, while the more northern languages have the same verb ending in all three persons. However, like Old Saxon, it had only two classes of weak verb, with only a few relic verbs of the third weak class, while the third class had still largely been preserved in Old High German.

Old Dutch texts are extremely rare, and much more limited when compared to related languages like Old English and Old High German. Most of the earliest texts written in the Netherlands were written in Latin rather than Old Dutch. Some of these Latin texts however contained Old Dutch words interspersed with the Latin text. Also, it is extremely hard to determine whether a text actually is written in Old Dutch as the Germanic dialects spoken at that time were much more closely related.

The most famous sentence

Arguably, the most famous text containing "Old Dutch" is: Hebban olla vogala nestas hagunnan, hinase hic enda tu, wat unbidan we nu ("All birds have started making nests, except me and you, what are we waiting for"), dating around the year 1100, written by a Flemish monk in a convent in Rochester, England. For a long time this sentence was considered to be the earliest in Dutch. However according to professor Luc de Grauwe the text could equally well be Old English, more specifically Old Kentish. However, there doesn't seem to be a general consensus on this matter. It should also be noted that Old (West) Dutch and Old English were very similar. [1]

The Wachtendonck Psalms are a number of psalms written in Latin and an eastern variety of Old Franconian. It is unclear whether the dialect is Old Limburgish or a variety of Rhine Franconian. Very little remains of them. The psalms were named after a manuscript which has not come down to us, but out of which scholars believe the surviving fragments must have been copied. This manuscript was once owned by Canon Arnold Wachtendonck. The surviving fragments are handwritten copies made by the Renaissance scholar Justus Lipsius in the sixteenth century. Lipsius made a number of separate copies of apparently the same material and these versions do not always agree. In addition, scholars conclude that the numerous errors and inconsistencies in the fragments point not only to some carelessness or inattentiveness by the Renaissance scholars but also to errors in the now lost manuscript out of which the material was copied. The language of the Psalms suggests that they were originally written in the 10th century. A number of editions exist, among others by the 19th-century Dutch philologist Willem Lodewijk van Helten and, more recently, the diplomatic edition by the American historical linguist Robert L. Kyes (1969) and the critical edition by the Dutch philologist Arend Quak (1981). As might be expected from an interlinear translation, the word order of the Old Franconian text follows that of the Latin original very closely.

The Leiden Willeram is the name given to a manuscript containing a Low Franconian version of the Old High German commentary on Song of Solomon by the German abbot Williram (ultimately by Isidore of Seville). Until recently, based on its orthography and phonology the text of this manuscript was believed by most scholars to be Middle Franconian, that is Old High German, with some Limburgic or otherwise Franconian admixtures. But in 1974, the German philologist Willy Sanders proved in his study Der Leidener Willeram that the text actually represents an imperfect attempt by a scribe from the northwestern coastal area of the Low Countries to translate the East Franconian original into his local vernacular. The text contains many Old Dutch words not known in Old High German, as well as mistranslated words caused by the scribe's unfamiliarity with some Old High German words in the original he translated, and a confused orthography heavily influenced by the Old High German original. For instance, the grapheme <z> is used after the High German tradition where it represents Germanic t shifted to /ts/. Sanders also proved that the manuscript, now in the University Library of Leiden University, was written at the end of the 11th century in the Abbey of Egmond in modern North Holland, whence the manuscript's other name Egmond Willeram.

Another important source for Old Dutch is the so-called Rhinelandic Rhyming Bible (Dutch: Rijnlandse Rijmbijbel and German: Rheinische Reimbibel). This is a verse translation of biblical histories, attested only in a series of fragments, which was composed in a mixed dialect containing Low German, Old Dutch and High German (Rhine-Franconian) elements.[2] It was likely composed in north-west Germany in the early 12th century, possibly in Werden Abbey, near Essen.

An earlier sentence of what could be considered Old Dutch comes from the "Lex salica", written in the early 6th century:

This phrase was used to free a serf. Apart from this the Lex Salica also contains a number of loose words.

In 1996 an even older (425-450) sentence was discovered on the sword sheath of Bergakker that is perhaps better described as Old Frankish than Old Dutch. Given the paucity of the remains of either, the demarcation between the two is hard to make although often a date of 800-900 is given for the transition. In that case both the Lex Salica and the Bergakker find should be considered Old Frankish.