In logic, modern philosophy, and mathematics a property is an attribute of an object; a red object is said to have the property of redness. The property may be considered a form of object in its own right, able to possess other properties. A property however differs from individual objects in that it may be instantiated, and often in more than one thing. It differs from the logical concept of class by not having any concept of extensionality, and from the philosophical concept of class in that a property is considered to be distinct from the objects which possess it. Understanding how different individual entities (or particulars) can in some sense have some of the same properties is the basis of the problem of universals. The terms attribute and quality have similar meanings.

In classical Aristotelian terminology, a property (proprium) is one of the predicables. It is a non-essential quality of a species (like an accident), but a quality which is nevertheless characteristically present in members of that species (and in no others). For example, "ability to laugh" may be considered a special characteristic of human beings. However, "laughter" is not an essential quality of the species human, whose Aristotelian definition of "rational animal" does not require laughter. Thus, in the classical framework, properties are characteristic, but non-essential, qualities.

Daniel Dennett distinguishes between lovely properties (such as loveliness itself), which, although they require an observer to be recognised, exist latently in perceivable objects; and suspect properties which have no existence at all until attributed by an observer (such as being a suspect in a murder enquiry)[3] 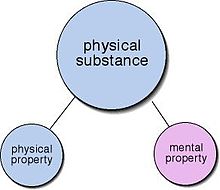 Property dualism: the exemplification of two kinds of property by one kind of substance

Property dualism describes a category of positions in the philosophy of mind which hold that, although the world is constituted of just one kind of substance—the physical kind—there exist two distinct kinds of properties: physical properties and mental properties. In other words, it is the view that non-physical, mental properties (such as beliefs, desires and emotions) inhere in some physical substances (namely brains).

In mathematical terminology, a property p defined for all elements of a set X is usually defined as a function p: X → {true, false}, that is true whenever the property holds; or equivalently, as the subset of X for which p holds; i.e. the set {x| p(x) = true}; p is its indicator function. It may be objected (see above) that this defines merely the extension of a property, and says nothing about what causes the property to hold for exactly those values.

The ontological fact that something has a property is typically represented in language by applying a predicate to a subject. However, taking any grammatical predicate whatsoever to be a property, or to have a corresponding property, leads to certain difficulties, such as Russell's paradox and the Grelling–Nelson paradox. Moreover, a real property can imply a host of true predicates: for instance, if X has the property of weighing more than 2 kilos, then the predicates "..weighs more than 1.9 kilos", "..weighs more than 1.8 kilos", etc., are all true of it. Other predicates, such as "is an individual", or "has some properties" are uninformative or vacuous. There is some resistance to regarding such so-called "Cambridge properties" as legitimate.[4]

A relation is often considered[weasel words] to be a more general case of a property. Relations are true of several particulars, or shared amongst them. Thus the relation ".. is taller than .." holds "between" two individuals, who would occupy the two ellipses ('..'). Relations can be expressed by N-place predicates, where N is greater than 1.

This article incorporates material from property on PlanetMath, which is licensed under the Creative Commons Attribution/Share-Alike License.