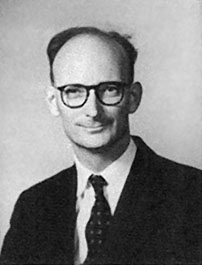 John Langshaw Austin (, [Warnock, p. 3.] – , ) was a British philosopher of language, born in Lancaster and educated at and Balliol College, Oxford University. Austin is widely associated with the concept of the speech act and the idea that speech is itself a form of action. His work in the 1950s provided the early underpinnings for the modern theory of s developed subsequently by the Oxford-educated American philosopher and his followers.

After serving in during , Austin became White's Professor of Moral Philosophy at Oxford. He occupies a place in philosophy of language alongside Wittgenstein in staunchly advocating the examination of the way words are "used" in order to elucidate meaning. Unlike many ordinary language philosophers, however, Austin disavowed any overt indebtedness to Wittgenstein's later philosophy. [The Wittgenstein scholar ("Wittgenstein," Oxford University Press, (Oxford), 1988, p.114) is certain that, despite the fact that Wittgenstein’s work "might" have possibly played some "second or third-hand [part in the promotion of] the philosophical concern for language which was dominant in the mid-century", "neither" "nor" any of those in the so-called "" school that is chiefly associated with J. L. Austin (and, according to Grayling, , , and ) were Wittgensteinians. More significantly, Grayling asserts that "most of them were largely unaffected by Wittgenstein’s later ideas, and some were actively hostile to them".] His main influence, he said, was the exact and exacting common-sense philosophy of .

The second son of Geoffrey Langshaw Austin (1884–1971), an architect, and his wife Mary Bowes-Wilson (1883–1948), Austin was born in on 26 March 1911. After the , the family moved to Scotland, where Austin's father became the secretary of , . Austin was educated at and , holding classical scholarships at both. He arrived at Oxford in 1929 to read ('Greats'), and in 1931 gained a First in classical moderations and also won the for Greek prose. Greats introduced him to serious philosophy and gave him a life-long interest in . In 1933, he got first class honours in his Finals.

His training as a classicist and linguist influenced his later work.

"How to Do Things With Words"

"How to Do Things With Words" is perhaps Austin's most influential work. In it he attacks what was at his time a predominant account in philosophy, namely, the view that the chief business of sentences is to state facts, and thus to be true or false based on the truth or falsity of those facts. In contrast to this common view, he argues, truth-evaluable sentences form only a small part of the range of utterances. After introducing several kinds of sentences which he assumes are indeed not truth-evaluable, he turns in particular to one of these kinds of sentences, which he deems "s." These he characterises by two features:
* First, to utter one of these sentences is not just to "say" something, but rather to perform a certain kind of action.
* Second, these sentences are not true or false; rather, when something goes wrong in connection with the utterance then the utterance is, as he puts it, "infelicitous", or "unhappy." The action which performative sentences 'perform' when they are uttered belongs to what Austin later calls a "" (more particularly, the kind of action Austin has in mind is what he subsequently terms the ""). For example, if you say “I name this ship the "Queen Elizabeth"," and the circumstances are appropriate in certain ways, then you will have done something special, namely, you will have performed the act of naming the ship. Other examples include: "I take this man as my lawfully wedded husband," used in the course of a marriage ceremony, or "I bequeath this watch to my brother," as occurring in a will. In all three cases the sentence is not being used to describe or state what one is 'doing', but being used to actually 'do' it.

After numerous attempts to find more characteristics of performatives, and after having met with many difficulties, Austin makes what he calls a "fresh start", in which he considers "more generally the senses in which to say something may be to do something, or in saying something we do something".

For example: John Smith turns to Sue Snub and says ‘Is Jeff’s shirt red?’, to which Sue replies ‘Yes’. John has produced a series of bodily movements which result in the production of a certain sound. Austin called such a performance a "phonetic act", and called the act a "phone". John’s utterance also conforms to the lexical and grammatical conventions of English &ndash; that is, John has produced an English sentence. Austin called this a " act", and labels such utterances "". John also referred to Jeff’s shirt, and to the colour red. To use a pheme with a more or less definite sense and reference is to utter a "", and to perform a " act". Note that rhemes are a sub-class of phemes, which in turn are a sub-class of phones. One cannot perform a rheme without also performing a pheme and a phone. The performance of these three acts is the performance of a "locution" &ndash; it is the act of saying something.

John has therefore performed a locutionary act. He has also done at least two other things. He has asked a question, and he has elicited an answer from Sue.

Asking a question is an example of what Austin called an "." Other examples would be making an assertion, giving an order, and promising to do something. To perform an illocutionary act is to use a locution with a certain force. It is an act performed "in" saying something, in contrast with a locution, the act "of" saying something.

Eliciting an answer is an example of what Austin calls a "", an act performed "by" saying something. Notice that if one successfully performs a perlocution, one also succeeds in performing both an illocution and a locution.

In the posthumously published "Sense and sensibilia" -- the title is an allusion to the novel "" by -- Austin criticises theories of perception, particularly that of in "The Foundations of Empirical Knowledge". Austin argues that Ayer fails to understand the proper function of words such as "illusion", "hallucination", "looks", "appears" and "seems". He argues that these words allow us to express reservations about our commitment to the truth of what we are saying, and that the introduction of sense-data adds nothing to our understanding of or ability to talk about what we see. Ayer responded to this critique in the essay "Has Austin refuted the sense-data theory?".

:Foreword -- Having taken a course from Austin on this topic at Oxford in 1947, Sir Geoffrey Warnock (1923-95) says he put Austin's fragmentary lecture notes into sentence form, with the help of class notes from later students of the course, and claims to relate faithfully Austin's "argument" though not his exact wording.

:Chapter 1 -- Austin intends to debunk a theory of sense perception that dates back thousands of years and picks recent expressions of it by Ayer, Price, and Warnock, because they express it fairly clearly. The theory states that we never see or directly perceive material objects but only sense-data or sense perceptions. Rather than start with the varied things we see -- say, pens, rainbows, and after-images -- philosophers tend to ask facilely for a general kind of thing and wind up unfair to the facts and to language while using "a certain special, happy style of blinkering philosophical English," Austin says.

Austin's papers were collected and published posthumously as "Philosophical Papers" by and . The book originally contained ten papers, two more being added in the second edition and one in the third.

"Are there "A Priori" Concepts?"

This early paper contains a broad criticism of . The question set dealing with the existence of "a priori" concepts is treated only indirectly, by dismissing the concept of "concept" that underpins it.

The first part of this paper takes the form of a reply to an argument for the existence of Universals: from observing that we do use words such as "grey" or "circular" and that we use a single term in each case, it follows that there must be a "something" that is named by such terms - a universal. Furthermore, since each case of "grey" or "circular" is different, it follows that universals "themselves" cannot be sensed.

Austin carefully dismantles this argument, and in the process other transcendental arguments. He points out first that universals are not "something we stumble across", and that that they are "defined" by their relation to particulars. He continues by pointing out that, from the observation that we use "grey" and "circular" as if they were the names of things, it simply "does not follow" that there is something that is named. In the process he dismisses the notion that "words are essentially proper names", asking "...why, if 'one identical' word is used, "must" there be 'one identical object' present which it denotes".

In the second part of the article, he generalises this argument against universals to address s as a whole. He points out that it is "facile" to treat concepts as if they were "an article of property". Such questions as "Do we possess such-and-such a concept" and "how do we come to possess such-and-such a concept" are meaningless, because concepts are not the sort of thing that one possesses.

In the final part of the paper, Austin further extends the discussion to relations, presenting a series of arguments to reject the idea that there is some "thing" that is a relation.

"The Meaning of a Word"

His paper "The Meaning of a Word" is a polemic against doing by attempting to pin down the "meaning" of the words used; for 'there is "no" simple and handy appendage of a word called "the meaning of the word (x)"'. Austin warns us to take care when removing words from their ordinary usage, giving numerous examples of how this can lead to error.

"A Plea For Excuses"

"A Plea For Excuses" is both a demonstration by example, and a defense of, linguistic philosophy:

An example of such a distinction Austin describes in a footnote is that between the phrases "by mistake" and "by accident". Although their uses are similar, Austin argues that with the right examples we can see that a distinction exists in when one or the other phrase is appropriate.

Austin proposes some curious philosophical tools. For instance, he uses a sort of word game for developing an understanding of a key concept. This involves taking up a dictionary and finding a selection of terms relating to the key concept, then looking up each of the words in the explanation of their meaning. This process is iterated until the list of words begins to repeat, closing in a “family circle” of words relating to the key concept.