David Jones was founded in 1838 by David Jones, a Welsh immigrant, and is claimed to be the oldest continuously operating department store in the world still trading under its original name.[3][4] It currently has 37 stores located in most Australian states and territories. David Jones' main department store rival is Myer.

David Jones was a Welsh merchant who met Hobart businessman Charles Appleton in London. Appleton had established a store in Sydney in 1825 and Jones subsequently established a partnership with Appleton, moved to Australia in 1835, and the Sydney store became known as Appleton & Jones. When the partnership was dissolved in 1838, Jones moved his business to premises on the corner of George Street and Barrack Lane, Sydney. Jones survived the depression of the 1840s, and by 1856 had retired from active management of the business. A few years later when the firm failed, he returned to manage its affairs and in a few years had fully discharged all obligations to his creditors.[5] By 1887, the George Street store had been rebuilt and a mail order facility introduced. A factory was opened in Marlborough Street, Sydney to reduce reliance on imported goods.

An outstanding feature of the Elizabeth St. shop, contributing greatly to its aura of quality and exclusivity, was David Jones Art Gallery founded in 1944. Directors included Will Ashton (1944–47), Marion Hall Best (1947–49), John Amory (1949–50), M P Ferrandiere (1950–53), George Duncan (1953–63) and Robert Haines (1963–?). Among the many drawcards was the Dobell exhibition of 1944, the Duke of Bedford's collection in 1962, and the Mendel Collection of Modern Painting also in 1962. Many of the prominent arts societies which held annual exhibitions there included the Australian Art Society, the Society of Artists, Australian Watercolour Institute, Contemporary Art Society and Society of Sculptors and Associates. Prize exhibitions held in the Gallery included those sponsored by W D & H O Wills and Transfield.[7]

Throughout the 1930s and '40s, the Sydney store supported The Dajonians Repertory Society, a Staff Club amateur theatre group. Their plays were variously performed in the David Jones theatrette and such theatres as St. James' Hall and Independent Theatre. They engaged the services of a permanent producer (Carl Francis throughout the '30s and Frederick Hughes from 1940) and produced six plays a year, mostly light comedies by recognised playwrights such as J. B. Priestley.[8]

By 1959, the store network had expanded to eight stores, and by 1980 David Jones had moved into Queensland, ACT, Victoria and South Australia.[3]

In 1980, the Adelaide Steamship Company acquired a substantial interest in David Jones. Through the 1980s and into the 1990s, the two companies involved themselves in a complex company structure whereby they each owned about half of each other and, financed by huge borrowings, they acquired a portfolio of other companies. In 1982, a David Jones store opened in Melbourne for the first time, having acquired and rebranded department store Buckley & Nunn. In 1985, David Jones acquired the Adelaide department store John Martins, (their second department store in Adelaide's prime retail strip, Rundle Mall). Other acquisitions included Petersville Sleigh, Buffum's, Tooth and Co., Penfolds and numerous others.[9] The recession of the early 1990s caused the nervous lenders, (over 200 banks), to demand the return of their assets. This forced the liquidation of the porfolio at "fire-sale" prices, and led the two companies into bankruptcy; the worthless Adelaide Steamship Company was renamed "Residual Assco Ltd" and was delisted. The worthless David Jones Limited was renamed "DJL". A number of the assets with value were very successfully sold off via public floats, in particular, National Foods, Woolworths, and the department store assets of DJL were floated as "David Jones Limited". (More information can be found at Tooth and Co.#Takeover and Tooth and Co.#The three ugly sisters

In 1995, David Jones announced an $800 million public float of the David Jones and John Martin retail operations. The "new" David Jones Limited was subsequently listed on the Australian Stock Exchange with a new ASX code of DJS.[6] 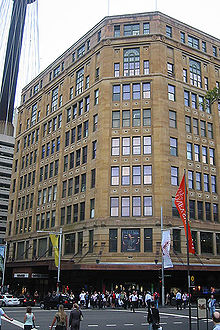 The separation and public float of the department store assets in 1995 resulted in structural and cultural changes which saw periods of stagnancy and high staff turnover. Changes in management saw DJs falter in the late 1990s. Shares initially offered at A$2 fell as low as A$0.90.[6]

A major strategic review in 2003 saw the closing of DJs two unprofitable stores: the loss-making David Jones Online web-based business and its gourmet food retail stores, Foodchain. It revitalised many of its stores, including its flagship Elizabeth Street and Market Street stores in Sydney (two individual buildings, linked both underground and via air bridge through Westfield Sydney). Since then its profitability - and profile - has improved, thanks to a combination of a consumer spending boom, and the securing of exclusive deals with many high-profile Australian and international brands. In this period, the share price reached highs of over A$4.50.[10]

The global downturn in 2009 affected David Jones, reporting a sales decline of 6.4% to $1,061.2m in the first half of 2009.[11] In June 2010 CEO Mark McInnes resigned after allegations of unprofessional behaviour toward a female employee.[12]

David Jones' branding - a black-on-white houndstooth pattern - is one of the most recognised corporate identities in Australia. A government sponsored panel judged it in 2006 as one of Australia's top ten favourite trade marks.[13] The origin of this motif owes itself to the insistence of its founder on not using the store's name on its packaging. His aim was that the store would be so well known that everyone should recognise it simply by this now-famous motif.[citation needed]

Model Megan Gale has been a prominent public face for David Jones since 2001, appearing in its annual fashion parades until retiring in 2008.[14] Model Miranda Kerr was subsequently named to take over from Gale as David Jones' "face" for catwalk and catalogue appearances.[15] Celebrities used by David Jones in recent times include Liz Hurley[16] and Kim Cattrall.[17]

Six stores have food halls which are viewed as a key part of the David Jones brand, emphasising quality and style, yet have come under recent criticism.[18] The failed Foodchain experiment - effectively a smaller chain of standalone food halls - was sold to the parent company of Freedom Furniture in 2003 after it proved unprofitable.[19] 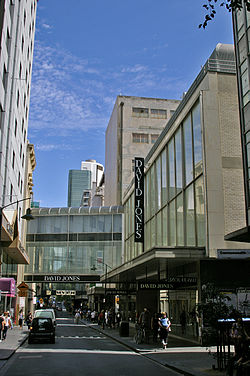 David Jones has department stores in all Australian capital cities except Hobart and Darwin, and also has stores in Kotara (Newcastle), Tuggerah (opened 1995), Wollongong and Robina (Gold Coast). Within NSW, David Jones established its first store in Newcastle by acquiring Scott's department store on Hunter Street in 1958, which closed in 2011.[20] David Jones also acquired the Big W Department Stores at Kotara Fair (now Westfield Kotara) and Warrawong, New South Wales in 1971 It expanded interstate by acquiring Buckley & Nunn (Melbourne) in 1982, John Martin's (Adelaide) in 1985 and Aherns (Perth) in 1999. David Jones also owned the former 'Georges' store in Collins Street, Melbourne between 1981 and 1995.[21]

Stores in Sydney at Centro Bankstown (closed July 2007) and Westfield Eastgardens (October 2007) were replaced by Myer. However, David Jones replaced the Myer store in Westfield Burwood in May 2007 and opened a new store at Westfield Chermside in August 2007 and a new store at QueensPlaza, Brisbane in February 2008.

In January 2008, David Jones announced that the Claremont store (Western Australia) would be closed in 2009 to allow for a complete rebuilding to reopen in 2011 that will increase its size by 60%.[23]

David Jones derives about 30 per cent of its annual earnings from its store cards. In February 2008, it announced it would be launching a David Jones American Express card before Christmas 2008 and would transfer its $400 million store card receivables (representing 400,000 cardholders) to American Express.[28] It is also considering additional financial services such as insurance and home loans under its brand.[29]