Situated on the province's South Shore, Lunenburg is located on a peninsula at the western side of Mahone Bay. The town is approximately 90 kilometres southwest of the county boundary with the Halifax Regional Municipality.

The town was established during Father Le Loutre's War. The historic town was designated a United Nations Educational, Scientific and Cultural Organization (UNESCO) World Heritage Site in 1995. This designation ensures protection for much of Lunenburg's unique architecture and civic design, being the best example of planned British colonial settlement in North America.

For over a hundred years, Lunenburg was an Acadian/ Mi’kmaq village named Mirligueche. It was established under the command of Isaac de Razilly in the first half of the seventeenth century.[1] In 1745 there were reported to be only eight settlers in the village. Four year later, Cornwallis reported that there were a number of families that lived in comfortable wooden houses.[2]

Despite the British Conquest of Acadia in 1710, Nova Scotia remained primarily occupied by Catholic Acadians and Mi'kmaq. Father Le Loutre's War began when Edward Cornwallis arrived to establish Halifax with 13 transports on June 21, 1749.[3] By unilaterally establishing Halifax the British were violating earlier treaties with the Mi'kmaq (1726), which were signed after Dummer's War.[4] Upon the outbreak of Father Le Loutre's War, on October 5, 1749, Governor Edward Cornwallis sent Commander White with troops in the 20 gun sloop Sphinx to Mirligueche (i.e., Lunenburg) and had the village destroyed.[5] By 1753 there still was only one family in the area - a Mi'kmaq man named "Old [Paul] Labrador" and his metis family.[6]

After establishing Halifax, the British quickly began to build other settlements. To guard against Mi'kmaq, Acadian and French attacks on the new protestant settlements, British fortifications were erected in Halifax (1749), Dartmouth (1750), Bedford (Fort Sackville) (1751), Lunenburg (1753) and Lawrencetown (1754). The Natives and Acadians raided the Lunenburg peninsula nine times in the first six years of its establishment.[7]

Three years into the war, John Creighton led a group of Foreign Protestants to settle the area and renamed it Lunenburg (1753).[8] In 1753, during Father Le Loutre's War, the British unilaterally established Lunenburg, that is, without negotiating with the Mi'kmaq people. In the spring, Governor Hopson was received warnings from Fort Edward that as many as 300 natives nearby were prepared to oppose the settlement of Lunenburg and intended to attack upon the arrival of settlers. Supervised by Lawrence and protected by several ships of the British Navy and by 160 Regular soldiers, protestant settlers established the village. [9]

The original inhabitants of Lunenburg (mostly Germans from the southern Rhineland, Swiss and French Protestants from Montbéliard) came during the same wave of immigration that produced the Pennsylvania Dutch. They were "Foreign Protestants" encouraged by the British to settle in the area.[10] Lunenburg was settled by Foreign Protestants who came from the present day Tripoint of France, Germany and Switzerland. The town was named in honour of King George II, who also happened to be the duke of Braunschweig-Lüneburg.[11]

During Father Le Loutre's War, in mid December 1753, within six months of their arrival at Lunenburg, the new settlers rebelled against their living conditions. The rebellion became known as "The Hoffman Insurrection." The Rebellion was led by John Hoffman, one of the Captains who had established the settlers in the town.

Hoffman led a mob which eventually locked up in one of the blockhouses a number of Commander Patrick Sutherland’s troops and the Justice of the Peace. Commander Patrick Sutherland at Lunenburg asked for reinforcements from Halifax and Colonel Robert Monckton was sent with troops. Monckton arrested Hoffman and brought him to Halifax where he was fined and imprisoned on Georges Island (Nova Scotia) for two years.[12]

Because of the living conditions and encouragement from Le Loutre, a number of the French and German-speaking Foreign Protestants left the village to join the Acadian communities.[13]

During the French and Indian War (1754–1763), the town was protected by several small blockhouses that were garrisoned by British regulars as well as by provincial troops from Massachusetts. These forts were erected to protect the town from raids by French warships and from attacks by Acadians and Indians. During the Expulsion of the Acadians, specifically the Bay of Fundy Campaign (1755), the British sent the Acadian cattle at Grand Pre to Lunenburg to support the British settlement that was established with Foreign Protestants.[14]

There were nine raids on the Lunenburg Peninsula during the war. For example, Indians (Maliseet) attacked in the Raid on Lunenburg (1756), in which twenty settlers were killed. Despite the protection of increased number of blockhouses built on the peninsula, eight more Indian/ Acadian raids happened against those on the Lunenburg Peninsula over the next three years.[15] A total of 32 people from Lunenburg were killed in the raids with more being taken prisoner.[16] The British reported that most of these raids were by the Mi'kmaq and Acadians at Cape Sable (present-day Shelburn and Yarmouth Counties).[17]

During the summer of 1758, there were four raids on the Lunenburg Peninsula. On July 13, 1758, one person on the LaHave River at Dayspring was killed and another seriously wounded by a member of the Labrador family.[21] The next raid happened at Mahone Bay, Nova Scotia on August 24, 1758, when eight Mi'kmaq attacked the family homes of Lay and Brant. While they killed three people in the raid, the Mi'kmaq were unsuccessful in taking their scalps, which was the common practice for payment from the French.[22] Two days, later, two soldiers were killed in a raid on the blockhouse at LaHave, Nova Scotia.[23] Almost two weeks later, on September 11, a child was killed in a raid on the Northwest Range.[24] 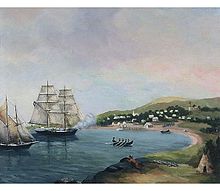 During the War of 1812, Nova Scotia’s contribution to the war effort was communities either purchasing or building various privateer ships to siege American vessels.[27] Three members of the community of Lunenburg purchased a privateer schooner and named it Lunenburg on August 8, 1814.[28] The owners were Capt. Oxner, Henry Wollenkaupt, Philip Rudolf and Henry Mosher. The schooner was ninety-three tons, five guns and a crew of forty-five men.

After a long naval battle in Mahone Bay, the Lunenburg militia was sent to take prisoners from American Privateer Young Teazer.

Lunenburg has long history of building woodenships. The most famous is the world famous schooner Bluenose and her daughter Bluenose II which remains an important tourist attraction in the town, her home port. 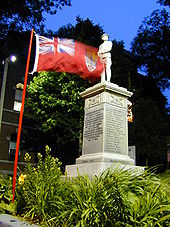 Tourism is now Lunenburg's most important industry and many thousands visit the town each year. A number of restaurants, inns, hotels and shops exist to service the tourist trade.[30] Numerous artists operate their own galleries. The town is home to the Fisheries Museum of the Atlantic, part of the Nova Scotia Museum. The schooner replica Bluenose II is operated by the museum and based out of Lunenburg. The town is also home to the privately run Halifax and Southwestern Railway Museum and the Knaut-Rhuland House Museum.

The town has a history of being an important seaport and shipbuilding centre. There are now numerous small businesses, high-tech industries including Composites Atlantic and HB Studios, and trade plants including High Liner Foods, which was at one point the largest fish plant in Canada. This plant now handles manufacturing and most fishing is done offshore.

The 2010 Japanese movie Hanamizuki was partly set and filmed in Lunenburg[31] and the science fiction television show Haven is partly filmed there though it is set in the United States.[32] The town is featured prominently in a 2010 series of Cisco Systems network product ads featuring Ellen Page.