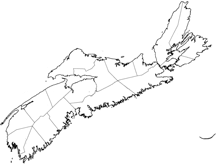 The area was originally settled by s who were expelled in during the Acadian Expulsion. After the Acadians, Canning - first called Apple Tree Landing and then "'Habitant Corner" - was settled in 1760 by and by the Dutch following . The present name was adopted in honour of British prime minister . [ [http://www.gov.ns.ca/nsarm/cap/places/page.asp?ID=101 Place Names of Nova Scotia] ]

Though much diminished in importance in recent years, Canning was once a major centre and and rail hub for farmers in Kings County. Canning merchants and farmers founded the which ran from 1889 to 1961, connecting the village to the mainline in . The village suffered three major fires in its history.

The Canadian parliamentarian had a home in Canning. Canning has a prominent statue of Harold Lothrop Borden, a relative, who was killed in the and is buried in .

A lighthouse that once served the port fell into disuse and abandonment but was restored in the 1990s. [ [http://fieldwoodhs.ednet.ns.ca/cfhslighthouse.html Lighthouse story] ]