It is situated on the north bank of the Annapolis River. Incorporated in 1909, it is located near the centre of the Annapolis Valley, from which it gets its nickname, "The Heart of the Valley".

Founded by New England Planters, it functions as a local service centre for the surrounding agricultural district.

The town's economy is also heavily influenced by proximity to the air force base CFB Greenwood in nearby Kings County.

Middleton is at the half-way point between Halifax and Yarmouth on Highway 101 and Trunk 1.

Middleton is the northern terminus of Trunk 10 which connects the town with Bridgewater and Lunenburg on the South Shore.

The town was located on the Dominion Atlantic Railway's (DAR) mainline from Halifax to Yarmouth and was also served by CN Rail's line from Bridgewater to Bridgetown (and on to Victoria Beach). CN Rail abandoned its line through Middleton in 1982; it had formerly been the Nova Scotia Central Railway (NSCR). The DAR abandoned its mainline through the town in March 1990, following the January 15, 1990, abandonment of the Evangeline passenger train service by Via Rail. The abandoned DAR and CN railway lines are currently owned by the Government of Nova Scotia and used as recreational trails. The old railway station is now a railway museum operated by the Futureview TREA. 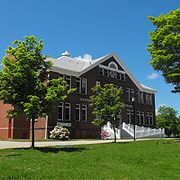 Soldiers Memorial Hospital is located in the town and provides tertiary care services for the eastern part of Annapolis County. The provincial government is funding construction of a new 50-bed nursing home in the town which is scheduled to open in late 2009.

Middleton is home to the Annapolis Valley MacDonald Museum, which is housed in the original Macdonald Consolidated School. This school, founded in 1903, was the first consolidated school in Canada, established with a grant from the Macdonald Tobacco Company of Montreal.[1] The museum has many travelling exhibits, and is the home of the Nova Scotia Museum Clock collection. 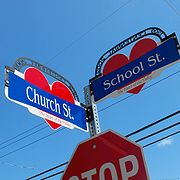 Middleton hosts an annual three day festival called "Heart of the Valley Days" every summer, during the month of July.

Middleton Farmers' Market was founded in 2008. It is held every Friday during the Summer and Fall in the park across from the Town Office from 3 pm to 7 pm. The Market is a non-profit member-run organization of market vendors and individuals from our community.