The Ilocos region or Region I (Ilokano: Rehion ti Ilocos, or Deppaar ti Ilocos ; Pangasinan: Rihiyon na Sagor na Baybay na Luzon) is a Region of the Philippines and is located in the northwest of Luzon. It borders to the east the regions of the Cordillera Administrative Region and Cagayan Valley and to the south the region of Central Luzon. To the west north is the South China Sea, otherwise known as the West Philippine Sea.

The region is composed of four provinces, namely: Ilocos Norte, Ilocos Sur, La Union and Pangasinan. Its regional center is San Fernando City, La Union. Ilocano speakers compose 66% of the region, and Pangasinan speakers are 27%, and the Tagalogs compose 3%.[1]

The province of Pangasinan composes 58% of the region's population, 42% of its area and 61% of its economy.[2]

Region I occupies the narrow plain between the Cordillera Central mountain range and the South China Sea. It also occupies the northern portion of the Central Luzon plain, to the north-east of the Zambales Mountains.

Lingayen Gulf is the most notable body of water in the region and it contains a number of islands, including the Hundred Islands National Park. To the north of the region is Luzon Strait.

The Agno river runs through Pangasinan and empties into the Lingayen Gulf. The river flow into a broad delta in the vicinity of Lingayen and Dagupan City.

The Ilocos provinces of the Ilocos Region is the historical homeland of the Ilocanos including Former Philippine President Ferdinand Marcos. The Ilocanos compose 66% of the region, the Pangasinan people compose 27%, and the Tagalogs compose 3%.[1]

Pangasinan is the historical homeland of the Pangasinenses including Former Philippine President Fidel Ramos. The population of Pangasinan comprises approximately 60% of the total population of the region. The Pangasinenses presently constitute around 50% of the population of the province.[1] The Ilocanos were not originally inhabitants of Pangasinan. They started migrating to Pangasinan in the 19th century.[3] Pangasinan was formerly a province of Region III (Central Luzon), but President Marcos signed Presidential Decree No. 1, 1972, incorporating it into Region I. Minority groups include the Tinggian and Isneg communities that inhabit the foothills of the Cordillera mountains.

The population is predominantly Roman Catholic with strong adherents of Protestantism such as the Aglipayan denomination further north of the country. There are also adherents to other Christian denominations, such as Iglesia ni Cristo, Mormons, and the like. There is also an undercurrent of traditional animistic beliefs especially in rural areas. The small mercantile Chinese and Indian communities are primarily Buddhists, Taoists, and Hindus.[citation needed]

Region 1 was first inhabited by the aboriginal Negritos before they were pushed by successive waves of Malay immigrants that penetrated the narrow coast. Tingguians in the interior, Ilocanos in the north, and Pangasinense in the south settled the region.

The Spanish arrived in the 16th century and established Christian missions and governmental institutions to control the native population and convert them to the Roman Catholic Church. Present-day Vigan City in Ilocos Sur province became the bishopric seat of Nueva Segovia. Ilocanos in the northern parts were less easily swayed, however, and remained an area filled with deep resentments against Spain. These resentments bubbled to the surface at various points in the Ilocos provinces' history as insurrections, most notably that of Andres Malong and Palaris of Pangasinan, Diego Silang and his wife Gabriela Silang in 1764, and the Basi Revolt in the 19th century. However, it was the Pangasinenses in the south who were the last to be stand against the Spaniards.[5]

In 1901, the region came under American colonial rule, and in 1941, under Japanese occupation.

During 1945, the combined American and the Philippine Commonwealth troops including with the Ilocano and Pangasinese guerillas liberated the Ilocos Region from Japanese forces during the Second World War.

Several modern presidents of the Republic of the Philippines hailed from the Region: Elpidio Quirino, Ferdinand Marcos, and Fidel V. Ramos.

Before the formation of the Cordillera Administrative Region, Region 1 also included the provinces of Abra, Mountain Province, and Benguet. Before Region 1 was modified by Ferdinand Marcos, Pangasinan was not part of the region.

Although the economy in the southern portion of the region, esp. Pangasinan, is anchored on agro-industrial and service industry, the economy in the northern portion of the region is anchored in the agricultural sector. The economy in Pangasinan is driven by agro-industrial businesses , such as milkfish (bangus) cultivation and processing, livestock raising, fish paste processing (bagoong), and others. At the same time the importance of trading, financial services, and educational services in the economy cannot be denied. Income in the Ilocos provinces or northern portion mostly come from cultivating rice, tobacco, corn, sugarcane, and fruits; raising livestock such as pigs, chicken, goats, and carabaos (water buffalos).

The distribution of the economic activity in the region may be seen from the collection of tax revenue of the national government. The bulk of the collections come from Pangasinan, which posted 61% of the total.[2]

The service and light manufacturing industries are concentrated in the cities. Dagupan City is mostly driven by its local entrepreneurs, which have started to expand its network up to the national level. San Fernando City in La Union also has an active shipping port and Laoag City in Ilocos Norte has an international airport.

The tourism industry, driven by local airlines and land transportation firms in the area like Farinas Transit Company and Partas, focuses on the coastal beaches and on eco-tourism. There are fine sands stretching along Bauang, La Union and the rest of the region. Opportunities to engage in other water sports and activities abound. Eco-tourism takes advantage of the marine and forest resources in the region and displays the natural beauty of the Region 1.[citation needed]

¹Dagupan City is an independent component city, figures are excluded from Pangasinan province. 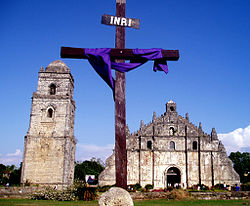